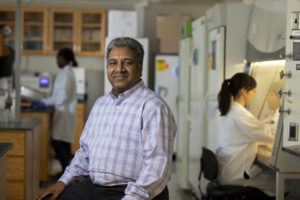 Harshavardha Thippareddi, a faculty member in the College of Agricultural and Environmental Sciences, was recently quoted by Medium in the article “How Chicken Became Like Apple and Android Phones.”

Some 90% of the 23 billion chickens eaten per year are one of two breeds—either a Cobb 500 or Ross 308. This fact contributes to environmental problems.

One reason that chickens have been bred down is because they are naturally aggressive animals who will nip at one another to determine a pecking order. This trait has been essentially been bred out of the chickens consumed today.

“When you have 20–40,000 birds in a house, you want them to behave in such a way that they don’t peck at each other,” said Thippareddi, who is UGA’s John Bekkers Professor in Poultry Science. “The Cobb and Ross birds have less aggressive characters.”