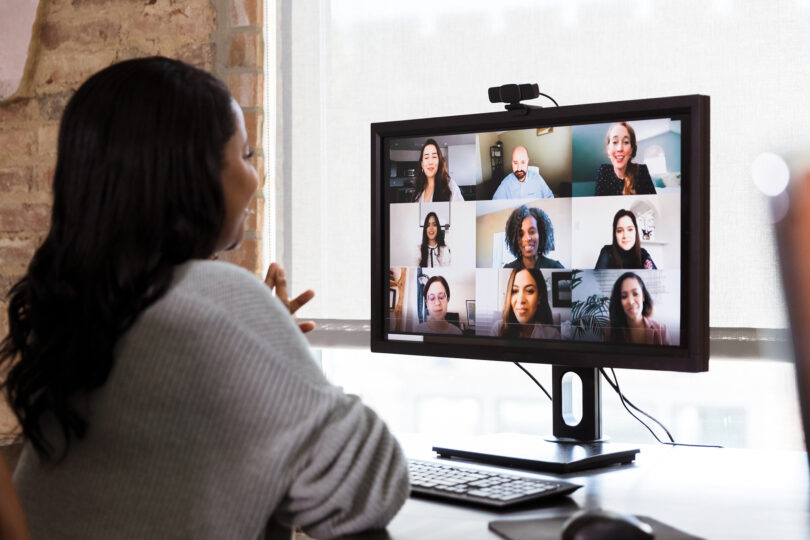 In the post-pandemic world, a few things have become ubiquitous: masks, hand sanitizer and Zoom fatigue, or the feeling of being worn out after a long day of virtual meetings. But new research from a team led by University of Georgia psychologist Kristen Shockley suggests that it’s not the meetings causing the fatigue—it’s the camera.

“We knew people had the perception that Zoom meetings were leading to fatigue, but we didn’t know what about those meetings was the problem,” said Shockley, associate professor in the Franklin College of Arts and Sciences. “Our study revealed that there’s something about the camera being on that causes people to feel drained and lack energy.”

For the study, published in the Journal of Applied Psychology, Shockley and the team worked with BroadPath, an Arizona-based health care services company. BroadPath has been in the remote-work field for almost 10 years using its own proprietary video software, and CEO Daron Robertson wanted to quantify how video can add or detract to the experience.

“A lot of the prevailing thought around remote work and video collaboration technologies has been, ‘More is better.’ It’s like saying, ‘Drinking a glass of wine every night is good, so drinking a bottle of wine can only be better,’” said Robertson, co-author on the paper.

“Our experience is that using front-facing video cameras in back-to-back Zoom meetings doesn’t feel good for a lot of employees. We wanted to quantify that and establish a baseline to measure improvements against.”

BroadPath employees were 95% remote before the pandemic and quickly transitioned to 100% after the pandemic, providing the team with a valuable opportunity to investigate a new phenomenon.

“I never heard the term ‘Zoom fatigue’ before the pandemic, and it’s rare that you get to study something that’s so relevant and new,” Shockley said. “We were able to conduct a study using the gold standard design—a true field experiment, with random assignment, which is also rare.”

After accessing calendar data for the employees, the team was able to control statistically for the number of meetings and total time spent in meetings, allowing them to isolate the finding that having the camera on during meetings led to fatigue, rather than just being in more meetings.

“We’re not advocating for cameras off all the time,” Shockley said, “but we are advocating for allowing people autonomy and being more strategic in the way that we do meetings with Zoom and other video platforms.”

The researchers also found that the effects were stronger in women and people who were newer to the organization. These groups exhibited more fatigue when their camera was on, perhaps because women feel heightened pressure to demonstrate competence by appearing extra vigilant on camera, and because newcomers may feel the need to prove themselves since they do not have established relationships with others, according to Shockley.

Additionally, there are issues related to child care and appearance norms.

“Women are statistically more likely to have kids running around in the background, and we also hold higher standards for physical appearance for women, which can add to stress and fatigue,” she said. “That just speaks to the need for people to have flexibility and more autonomy when it comes to video.”

“I suspect that there are some individual differences at play here that we didn’t measure,” Shockley said. “I’m guessing extroverts get less fatigued in general by the camera, so their performance isn’t going to suffer because they’re not going to feel that fatigue.”

“In my company, you’ve seen over the last 18 to 24 months that people have largely stopped using face-to-face video during meetings, in part because of what this research is daylighting,” Robertson said. “It’s just not a comfortable environment to work in all day long. But I think throwing the baby out with the bath water and having cameras off entirely would be the wrong conclusion.”

In addition to Shockley and Robertson, co-authors included Allison S. Gabriel and Mahira L. Ganster at the University of Arizona; Maira E. Ezerins and Christopher C. Rosen at the University of Arkansas; and Nitya Chawla at Texas A&M University.  The team is currently planning additional collaborations including research on how side-facing cameras, avatars and other technology enhancements impact video fatigue and employee engagement.