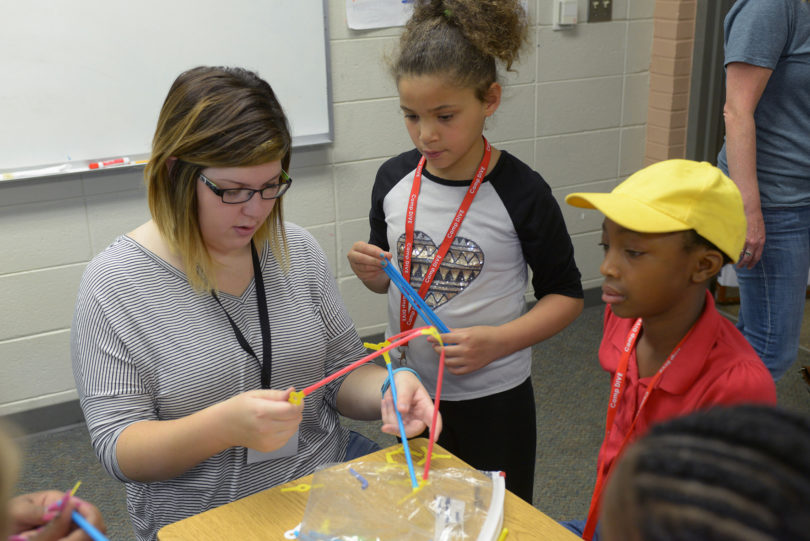 Talia’s plans changed when her mother said that she would be attending Camp DIVE this past June. Until then, Talia’s summer plans were decidedly less academic.

“I’d be on Musical.ly,” said Talia, referring to a music- and video-based social media app on her phone.

“I’d be at home watching TV and playing on my iPod,” she said.

But the camp was a nice change of pace, they said.

The girls were among more than 80 Athens-area students who took part in the inaugural year of Camp DIVE, a free, daylong summer camp coordinated by the College of Education in partnership with the Clarke County School District. Part of the goal behind the program was to fight summer boredom through two-week classes in topics such as robotics, local history, food production and literacy.

The camp gave kids the chance to experience these academic topics in nontraditional ways, with additional literacy-focused programs to help give students a boost in their reading skills during the summer months.

“It was so amazing to have two years of planning and preparation actually come to life and wonderful to see kids engaged and having fun,” said Janna Dresden, camp organizer and a clinical associate professor. “Those of us doing the organizing and teaching learned so much and are beginning to think about changes, both large and small, for next year. But our goal of creating a community of learners was certainly realized as we definitely learned along with the UGA students and CCSD campers.”

Along with giving elementary and middle school students a place to think, Camp DIVE also gave College of Education faculty a place to create lessons that push beyond what’s found in a typical classroom and a place for students in the college to hone their teaching skills. In this way, the camp extends the reach of the college’s Professional Development School District partnership, a program with the school district that brings faculty and students into local schools.

The Camp DIVE days were structured with literacy in mind but also with an eye to different ways to engage the students. Mornings featured community- and literacy-building activities, followed by the different classes. After lunch, volunteers from various community organizations came to teach the students about other topics or get them involved in other activities.

One afternoon, Tyler Dewey, executive director of BikeAthens, worked with middle-schoolers on how to fix a bike. Down the hall, local artist and College of Education alumnus Jamie Calkin worked with elementary-age students on a mural.

In the end, Jason Mizell, a doctoral candidate in the language and literacy education department, said he hopes the experience not only helped the kids stay engaged over the summer but also showed them that learning is more than sitting at a desk in a classroom.

“This keeps their mind working, but it also lets them know they have a voice, and it is worth our while, as adults, to listen to them,” he said. “For a lot of these kids, this is the first time they were in a school space where they have been asked their opinion, and it was heard.”