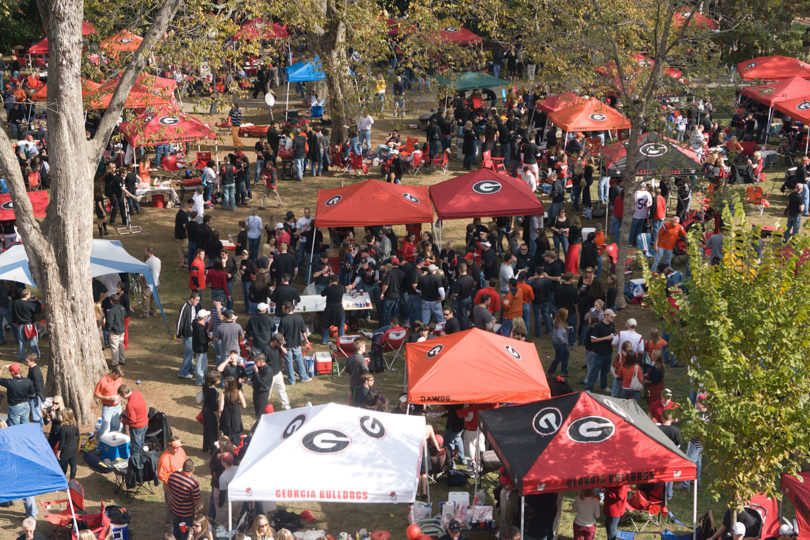 The changes were proposed by a game day management committee charged with reviewing such regulations on an annual basis.

The new policies confine North Campus tailgating to a four-hour period prior to kickoff and limits the kinds of items allowed in North Campus, which is defined as the area bounded by Broad, Jackson, Baldwin and Lumpkin streets, which includes the quadrangles between Broad Street and the main library as well as Herty Field.

“You only have to walk out [to North Campus] to know that it’s not yet recovered from the beating it took last year. Some things need to change,” said UGA President Michael F. Adams. “We can’t let it continue to be turned into a swamp, which is what’s happening between excessive use and a very wet winter. And we also have to protect the trees and historic beauty of North Campus. The quality of life throughout the campus is impacted. We’ve heard from many alumni and students who feel strongly about that.”

In addition, the university has banned pull-behind items (trailers, cookers, etc.) as well as golf carts and ATVs from all parking areas on campus and expanded the no-parking-on-sidewalks rule to Carlton Street.

“What has happened the last couple of years on North Campus has not been the tradition. It’s been an aberration,” Adams said.

In 2006, the university barred cars from parking on the grassy areas of campus, prevented tailgaters from using university outlets to power electronic devices and prohibited tailgating before 7 a.m. In 2008, UGA banned deep-fat fryers.

“There was not an intent to stop people from tailgating, but to change the face of what tailgating was on North Campus and move away from what had become the norm on the campus in the last couple of years and toward something more akin to what tailgating may have been a number of years ago,” he said. “A lot of these recommendations are designed to pull back from some of the things like generators, televisions and music that seem to attract large crowds of people for hours and hours and have a real damaging effect on the historic part of campus.”

“There have been a number of alumni groups encouraging the university to take steps to protect this historic site. The observations ranged across the board, but there was one consistent point: You can enjoy and benefit from the tailgating experience on North Campus without all the accoutrements that have been added in recent years,” he said. “It really came home for me when it was reported that last year some group actually set up a portable dance floor on campus.

That was an indication to me that it had gone far beyond what had been the accepted or the standard approach of doing a tailgate.”

Tom Jackson, vice president for public affairs, said that while the changes may be controversial, the re-evaluation process helps ensure that the university and football fans can find a consensus approach.

“There are those who think we’ve gone too far and there will be those who think we haven’t gone far enough, which means we’ve landed somewhere in the middle,” he said. “We’ve heard a lot of calls, particularly, for a total ban. It will be interesting to see how this works for one year and then we’ll re-evaluate it and see where we are.”