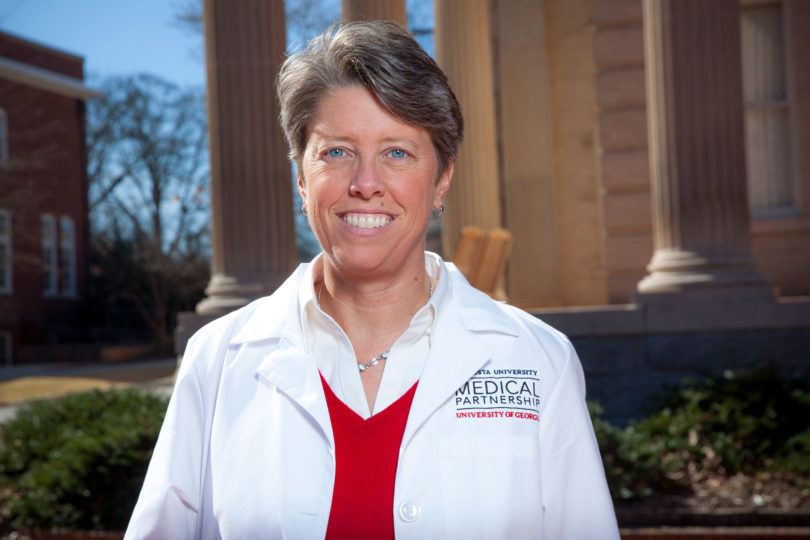 A consensus builder by nature, one of the first priorities that Dr. Shelley Nuss had after being named campus dean of the Augusta University/UGA Medical Partnership was to bring the faculty and staff together to define a shared vision that would guide their work going forward.

“I wanted to get cohesion around who we are, where we’re going and what we’re doing,” explained Nuss, who was named campus dean a year ago this month. “It was very clear from that process that we want to train the best physicians for the community and the state, while being recognized as a premier medical campus with innovative, forward-thinking teaching strategies.”

Nuss explained that active learning pedagogies hone students’ critical thinking skills and prepare them for practice in today’s rapidly changing health care environment. Small-group and case-based learning have always been a hallmark of the educational experience at the Medical Partnership, and students are increasingly gaining research experience. Nuss pointed out that a record 30 out of the 40 first-year students will be participating in research projects this summer under the direction of UGA, AU and Medical Partnership faculty.

Nuss joined the AU/UGA Medical Partnership as campus associate dean for graduate medical education in 2010, the same year that the first class of students enrolled. Those students graduated in 2014, and many are completing their residencies this year and will then begin practicing independently.

“We’ve had several alumni say that they want to practice in Georgia,” Nuss said. “And we know that if you’ve gone to medical school in Georgia and done a residency in Georgia, you have about a 70 percent chance of practicing in Georgia.”

Because residencies play such an important role in keeping physicians in Georgia, the state’s expansion of medical education has been accompanied by new residency programs in Georgia hospitals that were made possible by startup funding proposed by Gov. Nathan Deal and supported by the board of regents and the General Assembly.

“The governor proposed 400 new residency positions, and we’re on track to be 50 percent over that goal with 600 new residents by 2025,” Nuss said. “We’re really going to make a dent in the physician shortage, and we’re going to be able to do it for less money than was originally anticipated.”

She adds that while residencies were previously concentrated in the state’s major cities, many of the new residency programs are launching in smaller cities, such as Tifton, Moultrie, Rome and Athens, where new programs are in place at St. Mary’s Health Care System and Piedmont Athens Regional.

Nuss makes it clear that educating students is the highest priority, but the collective vision statement also emphasizes that the Medical Partnership seeks to be “a leader in research and scholarship.”

To that end, Nuss has worked to bring faculty from UGA, AU and members of the medical community with complementary areas of expertise together. The Clinical and Translational Research Unit on the UGA Health Sciences Campus, which provides outpatient space and personnel who support clinical trials and research that seeks to apply laboratory findings to human health, recently celebrated its one-year anniversary and is now a hub of biomedical research. Nuss notes that more than 250 participants to date have enrolled in studies that involve conditions ranging from the flu to heart disease and sleep apnea.

Nuss emphasizes that successes in instruction, residency expansion and research have been the result of a culture of collaboration and a very supportive medical community. She notes that at any given time, up to 125 physicians from throughout Northeast Georgia serve as volunteer clinical faculty, a role in which they mentor third- and fourth-year students in their practices.

“Building good, strong community partnerships with area agencies and doing service-learning is an important focus,” Nuss said. “It benefits students and people across the state, which really speaks to the reason the Medical Partnership was founded.”