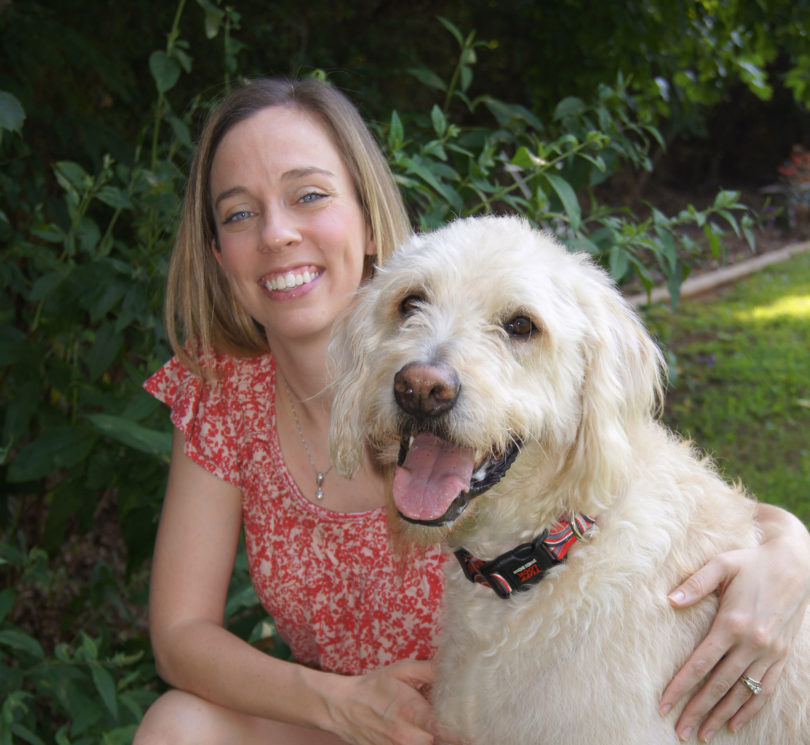 What dogs know is subject of summer psychology class

Norm didn’t sign up for college. But he’s going anyway-sort of-and his professor is also the nice woman who feeds him and takes him for walks.

Allison Eury, a doctoral student in psychology at UGA, is Norm’s companion-human. She’s also using him as a proving ground for a new course she’s teaching this summer, Psychology 3100, while 19 dog-loving UGA students are finding out that understanding what dogs know and think is both complex and interesting.

“Norm loved coming to class with you guys on Friday,” she tells the class on a Monday morning in late June. “He went straight home and zonked out for the rest of the afternoon.”

Norm’s an eager-to-please 5-year-old Labradoodle-a cross between a Labrador retriever and a standard poodle. A fuzzy ball of energy, Norm keeps Eury on her toes, but he’s also helped flesh out ideas on cognition she has been studying as a doctoral student in the psychology department’s brain and behavioral sciences program. There, she mostly works with primates (capuchin monkeys), and has even gone to Brazil to study them in the field.

But it turns out that studying how dogs think and learn is helpful to her doctoral work, especially since Norm lives at home and is usually game for another “class.” In fact, research on dog cognition is a hot area of interest in the field of psychology, Eury said. As it turns out, dogs are impressively good at interpreting human social cues. In tasks where dogs are required to follow human pointing gestures to find hidden food, dogs have actually outperformed chimpanzees.

At UGA, Norm has served as an in-class demonstrator of the unique olfactory abilities of all dogs, locating hidden food by smell alone. Eury and students hid treats under tennis balls placed inside a muffin tin, and Norm sniffed out his reward, leaving the unbaited tennis balls untouched. Students in Eury’s class took the idea home to test their own dogs, with similar results.

Ask a dog to do a job, and there’s a good chance he will give it a try. But how much do we really know about how dogs think? Do they actually like being trained as guide and service dogs-a common sight on college campuses now-or are they just going through canine boot camp to get it over with?

Sniffing out what makes dogs such marvelous companion and service animals has intrigued Eury’s students, and they are eager to compare what their own dogs know to what science says about them. The class, among other things, focuses on canine evolution and domestication, behavior and attention to human cues, perception, development and theories of how they learn. These are important indeed, because the ever-expanding range of jobs at which dogs excel has gone from traditional tasks as herding to such things as using their sense of smell to detect cancer in humans.

Just before class ends, Eury goes over instructions again for an upcoming field trip to Canine Assistants in Alpharetta. Founded in 1991, the nonprofit organization trains and provides service dogs for children and adults with physical disabilities or other special needs.

“Dogs are a good gateway animal for studying and thinking about cognition,” Eury says after the session for the day ends. “I think one of the lessons of the class is to teach students to think about their dog’s behavior from the perspective of the dog instead of the perspective of a human.”