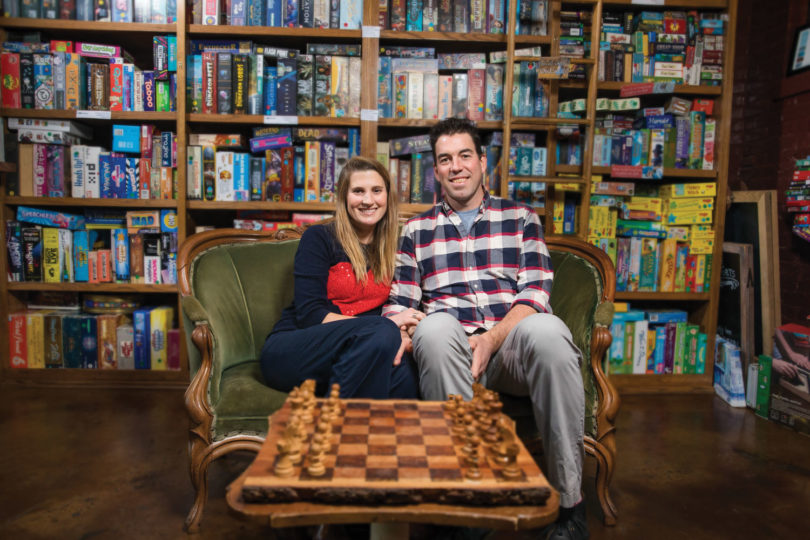 In many ways, the Rook & Pawn, located at 294 W. Washington St. in downtown Athens, is a typical Classic City establishment. Good café food. Friendly atmosphere. A nice spot to have a drink and unwind.

What sets the Rook & Pawn apart is its floor-to-ceiling shelves of board games available to patrons—800 in all. That, and the charm of owners Carrie and Tim Kelly.

“I’m not that competitive,” Carrie says. “But Tim is different. Not only does he want to win, he wants to make sure you lose.”

The Kellys met as student workers in the Georgia Center and moved together to Augusta when Carrie BS ’00 went to medical school. When Carrie did her pediatrics residency in Greenville, South Carolina, Tim BSEd  ’00, JD ’07 returned to UGA for law school. Three years later, Carrie’s residency finished and Tim had earned his law degree. They reunited in Athens and started their careers, Carrie as a pediatrician and Tim in UGA’s general counsel’s office. Somewhere along the way, they learned of their shared love of board games.

The idea of opening a café that catered to others’ love of them didn’t come until a few years ago, but when it did, they dove in. The Kellys visited a similar cafés in Los Angeles and Washington and spoke to other owners across the U.S. and Canada. Cafés that provide customers with board games to play while they eat or drink isn’t a new concept, but it’s one that’s mostly confined to larger cities. The Kellys, though, thought Athens would be a perfect market, and in June 2015, they found the perfect spot at the west end of downtown.

The weekend before they opened, Tim, Carrie, and several friends from their board game group and their kids stayed up until 4 a.m. unwrapping all the games and punching out cardboard tokens.

“When we finished with the last game, I put it on the shelf and it fit perfectly,” Carrie says.

Carrie ran the day-to-day operations for the first few months after opening, but soon she returned full time to her practice. Tim then left his job at UGA to take the lead, which he continues to do today.

It’s truly a labor of love and a perfect hangout for the Kellys, their 8- and 5-year-old boys, and their friends. With upwards of 800 games for all ages available and an additional 400 or so in storage, you’d think it would be tough for the Kellys to keep track of inventory. But that’s not the case. Ask about the location of a particular game and they can immediately point to it. Ask about whether another game is fun and the couple can offer a 15-30 second review.

“We see lots of families with kids early in the evening, and they’ll play Uno and have coffee,” Tim says. “Later on, the younger crowd comes in, and they play party games and have a beer. That was our dream scenario, and that’s how it’s worked out.”