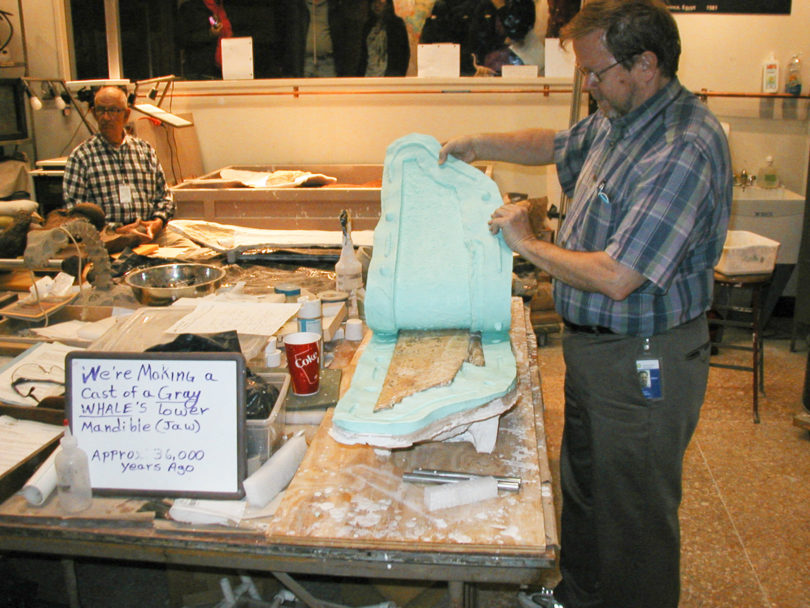 Casts of a five-foot-long jaw bone from an extinct Atlantic Gray whale discovered by UGA researchers will soon be on display in Washington, D.C., Atlanta, Skidaway Island and Athens, thanks to widespread interest in the one-of-a-kind find.

The 36,000-year-old mandible is the oldest of its kind found off the Georgia coast. The specimen was so rare that when Scott Noakes, research scientist at the Center for Applied Isotopes Studies, found the bone with a dive team near J-Y Reef off Sapelo Island, he didn’t know what it was.

But once he circulated pictures on the Internet, interest in the find began to build. Soon, researchers from academic and research institutions across the country were expressing their excitement-and offering their services.

“The neat thing is the number of people who volunteered their services for helping us with this,” Noakes said. “Emory (University) did a lot of work on the conservation end of it-cleaning it and preserving it-with two or three student interns. They’re using it for teaching; since they’d never worked with a bone before they wanted hands-on experience. Scientists from the Smithsonian are devoting their time to making the casts.”

The interest in the nearly 50-pound bone stems from its rarity. It belongs to a whale that no longer inhabits the Atlantic Ocean.

Now, the Smithsonian Institute, the Georgia Aquarium, the UGA Marine Extension complex on Skidaway Island and the UGA main campus in Athens all have plans to display casts of the bone.

And that may not be the last of it. Noakes hopes to return to J-Y Reef to further excavate the site.

“The mandible is one of the first pieces to fall off when a whale dies, but we also found two vertebrae nearby, which makes us think there might be more there,” he said.