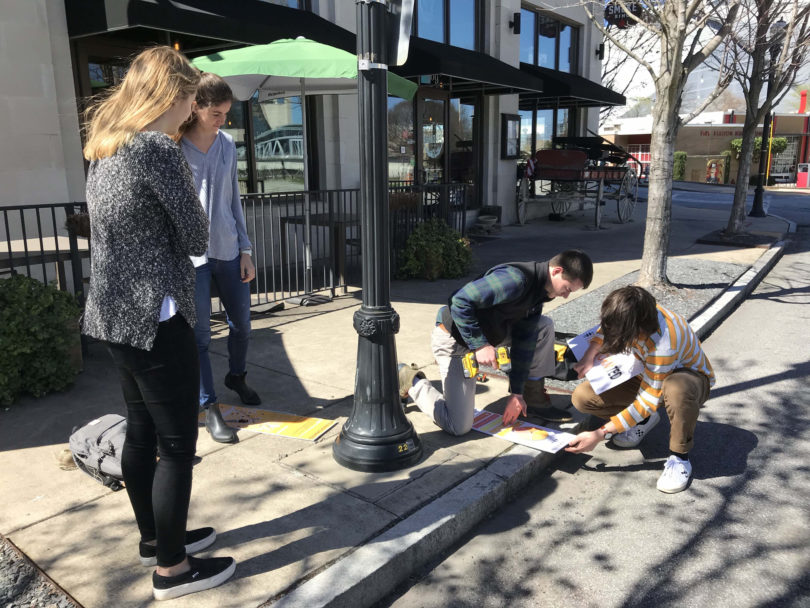 Among the students from UGA’s College of Environment and Design who worked on the winning design are Megan Daniel, Halle Salisbury, Matthew Cartledge and Jack Cherry.

The swath that Ted Turner Drive cuts through the heart of downtown Atlanta is a Blade Runner landscape: no soul, unrelenting high-speed traffic on four lanes, and no pedestrians or much in the way of signs of life in general. People take their lives in their hands just crossing the multi-lane in-town throughway.

“It has no spirit, no personality,” said Jack Cherry, a fourth-year Bachelor of Landscape Architecture student at the UGA College of Environment and Design. “Or at least that’s what it seems like at first.”

In fact, once his studio class immersed itself in the neighborhood, under the direction of associate professor Doug Pardue, he and his fellow classmates discovered that Ted Turner Drive is actually a nexus of several historic neighborhoods. These neighborhoods could remain threatened by continued automobile traffic and gentrification, or they could be enhanced and empowered with some interesting urban planning devices.

“What we discovered is that there are actually a lot of different urban conditions happening simultaneously on that street, which was once a hub of black commerce in Atlanta,” Cherry said. “Yes, there is a lot of homelessness, a lot of areas where it’s impossible to walk, but once we hung out there and visited small businesses and talked to people, we started seeing this as maybe a place that could guide change rather than just be a dangerous thoroughfare. There are already little gems of burger joints and coffee shops; we envisioned flex spaces where people can engage in the gig economy.”

The Atlanta Mayor’s Office of Resilience offered up a competition for students of planning and design in 2017. In spring 2018, students from Georgia Tech, Clark Atlanta University, Morehouse College and the University of Georgia took up the challenge, which was won by UGA’s College of Environment and Design.

In addition to conducting research about the history of the area, students spoke with pedestrians and business owners.

Using on-the-street “guerilla” design tactics and design games for three weeks, the students tried to get Atlantans to explore their own city and become more aware of their surroundings. In the process, they also tried to teach ideas about resiliency, not in a science-heavy way, but in an engaging way that people on the street could comprehend.

Pardue’s class used the extensive work that a studio class earlier in the year completed under the direction of Alfie Vick, also an associate professor at the college. The team won $2,500 and a lot of satisfaction in beating the urban colleges and universities in Atlanta.

The Mayor’s Office of Resilience sponsored the competition; implementation partners included Renew Atlanta and city’s the Department of Parks and Recreation; and funding came from Turner Enterprises, Rebuild by Design and T-SPLOST.