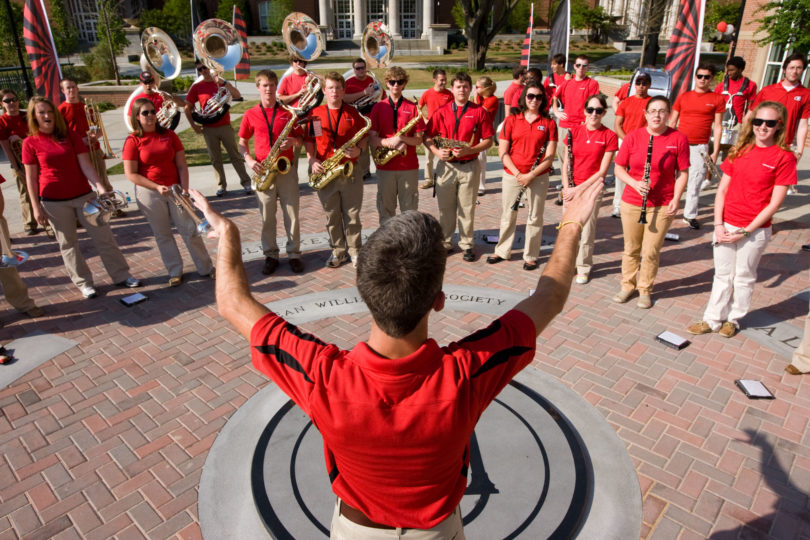 UGA celebrated the 225th anniversary of its founding with a two-day symposium. Members of the Redcoat Band performed as part of the event.

If there was a defining theme to the university’s 225th anniversary celebration, it was perspective.

“We did not want to let the 225th [anniversary] pass without any notice. It’s clearly not, in most people’s minds, the same as a 200th or a 250th, and yet it’s an important time in the university’s history,” said UGA President Michael F. Adams. “We wanted to take the time to take an honest look at ourselves. I believe there are certain times in the growth and maturation process for all of us, and our institutions, when it makes good sense to stop, pause and ask questions about what you’re doing and why you’re doing it.”

The university community celebrated the anniversary of UGA’s charter over two days by exploring the university’s past on the first day and planning for its future on the second.

“I want to put the University of Georgia and its founding into important historical context,” he said. “So much of the history of American higher education has focused on New England and the Northeast, but I would submit to you that if you look at the two national periods, starting with charter of UGA and into the early 1800s, it is really the South that is the heartland and the hotbed of university founding. A number of colleges are very influential in educating a number of governors, senators, the entire government of the Confederacy, and these institutions became very, very powerful that way.

“My point is that re-thinking the history of American higher education, the story and contribution of universities in the South have been woefully understated and it’s time to address that imbalance,” he added.

The day also included talks from James C. Cobb, B. Phinizy Spalding Distinguished Professor of History, who spoke about his lively undergraduate years at UGA in the 1960s; Nash Boney, professor emeritus of history, who spoke on the university’s early years; and several other UGA professors and staff members whose talks ranged from women’s admissions at UGA to intercollegiate athletics at UGA to the evolution of campus plans.

Former University System of Georgia Chancellor Steven Portch delivered the keynote address for the second day of the symposium. In it, he cautioned UGA officials not to allow the university to follow the same path as many other universities and continue “a slow march toward mediocrity.

“My stark conclusion is that American higher education is bankrupt financially and academically. We’ve watched business go through the same cycle, but some are coming out the end of it. There are two things they’ve accomplished that we have not in higher education: innovation and productivity,” he said. “The future demands of us that we strive for more distinction, more innovation, more productivity, higher levels of performance, a reinvention of our structures and a new business model.”

Portch, who now works as a higher education consultant, said he is optimistic about UGA’s progress toward the next 225 years.

“You have, in my mind, one of the great Honors Programs in the country by far. . . . What if you could take the Honors college and do some very different things in that,” he said. “There is a reason for optimism, however, in that we’ve the best minds in the world working on these problems-especially here.”