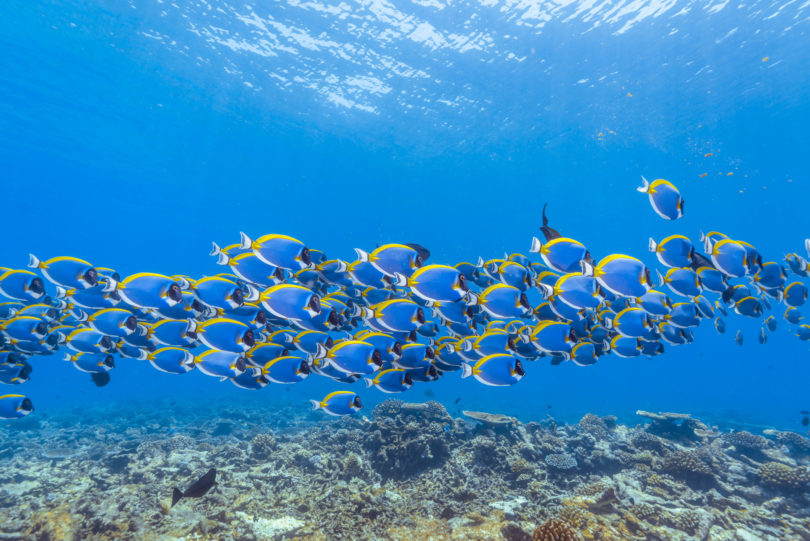 Schools of fish are one example of collective behavior.

One of nature’s most familiar phenomena is collective behavior—fish swimming in schools, locusts marching together, birds flocking. The same thing happens in humans, with individual cells synchronizing into circadian rhythms, part of a biological clock that tells our bodies when to eat, sleep or reproduce.

How this happens is something of a mystery, but new research from the University of Georgia sheds light on this question, with a team led by Jonathan Arnold providing evidence for the first time that individual cells have clocks.

Collective behavior is a relatively new area of research, in part because it requires so many disciplines working together, but the implications are not necessarily in new areas, with many falling under public health and medicine. The distress your body feels after traveling—and interrupting your usual circadian rhythm—has consequences if it persists over time, as it does for pilots and flight attendants. People who work swing shifts face similar issues.

Associations have been shown between the clock and cancer treatment, and greater knowledge of the clock has potential for addressing conditions like sundown syndrome, which causes elderly patients with dementia or Alzheimer’s to become agitated or confused in late afternoon and evening.

Arnold’s team isolated individual cells of Neurospora crassa, a type of pink bread mold, and found the three properties that indicate the presence of a clock: the ability to reset itself in response to light; the ability to keep time despite temperature fluctuations; and circadian rhythm, which regulates internal processes over a daily cycle.

“These are the fundamental properties of a biological clock, but until now, no one has shown that these properties hold true for single cells,” he said.

The team’s research was published in IEEE Access, a peer-reviewed open-access interdisciplinary journal from the Institute of Electrical and Electronics Engineers.

The clock can also be exploited for making biological therapeutics and chemical feedstocks, according to Arnold, professor of genetics in the Franklin College of Arts and Sciences.

“Depending on the organisms used, you need to capitalize on their clock-like behavior to make sure you get a lot of the material you’re trying to get made,” he said.

Another application is using nature to inspire new kinds of engineering approaches—building robotic swarms, for example.

“What if you have thousands of robots that you’re trying to get to cooperate?” Arnold said. “Some of the principles that might make that work are going to come out of projects like this one.”

In March 2020, UGA’s Institute of Bioinformatics will host a symposium on collective behavior that will explore these questions and more.

Arnold began working on the cellular clock back in 1999, collaborating with Heinz-Bernd Schüttler, a professor of physics in the Franklin College. In 2004, they received a National Science Foundation grant to develop new tools in systems biology to characterize the clock. That project continues, but they’ve since branched out (with additional NSF funding) to examine what is happening in single cells.

In order to search for these properties in individual cells, Arnold and Schüttler established a multidisciplinary team with faculty from four labs—genetics, physics, engineering and biochemistry.

Most studies have been done on a whole person or organism, according to Arnold. The UGA team developed a different scale of measurement, using as many as four different devices.

“There’s not one device that’s going to provide all the answers you want,” he said. “That’s why engineering is so important because you have to develop new ways of addressing different questions.”

The team also increased the average number of cells examined. Most studies look at hundreds or maybe a thousand cells at most, Arnold said. His team looked at more than 40,000 cells to understand how much variation was present and what happened to the variation as the cells start communicating with each other.

“This is a numbers game,” he said. “You have to be able to look at that many cells to really see how the synchronization is taking place.”

With the presence of  clocks in single cells established, the team continues its work with the goal of explaining how clocks synchronize in cells. There are two primary theories. One is a physical theory that noise—an external rhythm, like an irregular drumbeat—can  synchronize the cells’ clocks. The other is a chemical theory suggesting that cells send a signal to each other to coordinate their behavior.

“Success in this field depends on very different disciplines coming together to make it happen,” Arnold said.