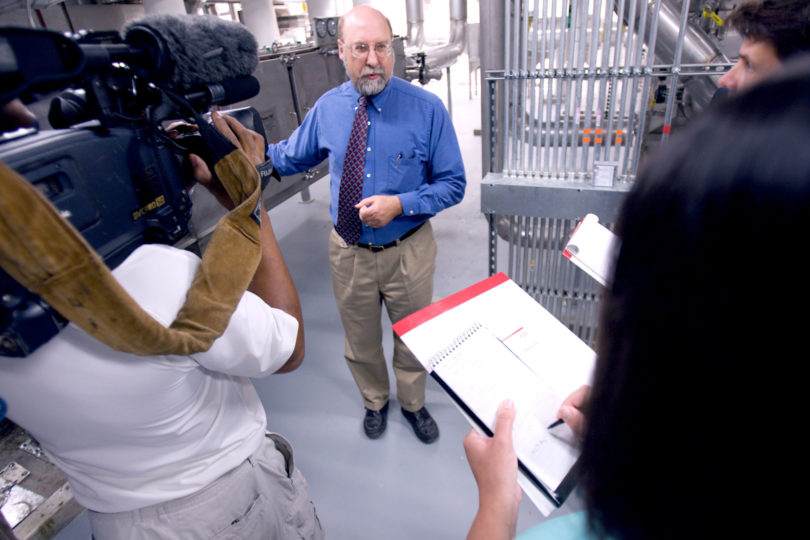 The College of Veterinary Medicine has opened its state-of-the-art Animal Health Research Center. An open house of the new facility will be held for members of the university community from 4-6 p.m. June 28.

Located on the corner of East Campus Road and Carlton Street, the AHRC (pronounced “ark”) is a three-story, 75,000-square-foot facility where researchers will conduct basic and applied research on vaccines, diagnostic tests and treatments for diseases that infect animals and humans.

“This research center will be part of a national effort to defend against naturally emerging diseases, as well as bioterrorism attacks,” said Sheila Allen, dean of the College of Veterinary Medicine.

“Because we will have facilities for investigating diseases affecting both animals and people, we can tackle a wide variety of illnesses, including most of the viral diseases-such as avian influenza, SARS and West Nile virus-that are major public health threats in this country and the rest of the world. We also can investigate diseases that are important to food safety and consequently to our economy.”

The research center also will serve as an economic development stimulus to the state, attracting top investigators, students and grants. In addition, it will strengthen partnerships with state, federal and private research institutions such as the Centers for Disease Control and Prevention, the U.S. Department of Agriculture, the Southeast Regional Center for Excellence for Biodefense and Emerging Infectious Diseases (funded by the National Institutes of Health) and the Southeastern Center for Emerging Biologic Threats at Emory University.

The AHRC has office and lab space for 50 investigators and staff, and researchers throughout campus as well as federal and industry scientists will have access to the center’s labs. The labs have been designed to protect researchers working within the building and the community at large.

UGA Eminent Scholar Ralph Tripp will lead the vaccine development laboratory. He and his colleagues are studying potential vaccines for infectious diseases such as severe acute respiratory syndrome and avian influenza.

“Essentially, the AHRC provides a mechanism to bridge basic research with translational studies that involve vaccine development,” Tripp said. “It also serves as a training component for both graduate students and veterinary professionals who have an interest in emerging and infectious diseases.”

The biocontainment labs are airtight, and air is sterilized as it enters and leaves the building. Fingerprint readers at the building’s main lobby and at labs ensure that only authorized and trained personnel enter, and security cameras are placed throughout the building.

The $63 million-facility has redundant features-three tanks for processing wastewater, paired exhaust fans and dual electrical systems, for example-so that safety won’t be compromised if one system fails.

“It’s a facility where people can work safely and where the community can be assured that nothing can escape that would be harmful,” Mispagel said.

Federal agencies such as the CDC and the U.S. Department of Agriculture operate similar facilities. But what makes the AHRC unique is that it’s the only university-operated facility in the nation with labs that meet federal biosafety level 3 agricultural requirements.

“Because it allows us to work in a safe environment on disease organisms that we would not be able to work with in a conventional laboratory setting, the Animal Health Research Center will help us attract research from industry and the government as well as from other academic research institutions,” Mispagel said.

For a small fee, parking is available in the Carlton Street Deck located behind the Coverdell Center. After 5 p.m., parking in most AHRC-area lots is free.