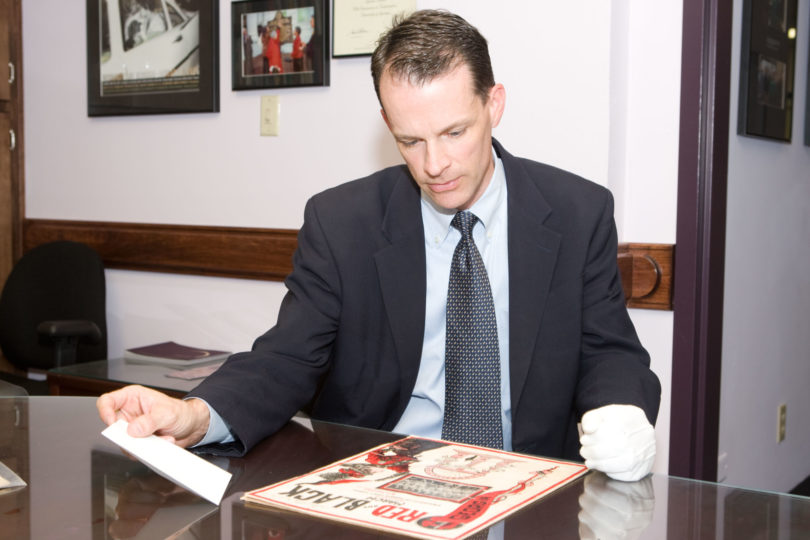 A former member of the Redcoat Marching Band

It was probably a march composed 100 years ago by the first director of a ragtag military band that would one day become the Redcoat Band.

But few people know about the march, and probably no one alive has ever heard it played, because the music disappeared decades ago and was thought to be lost.

That was until Lloyd Winstead came across a copy for sale on eBay. Now the obscure piece of UGA musical history has been recovered and returned home.

The song, titled “Red and Black March,” was composed in 1908 by R. E. Haughey, who directed the university’s first band from 1905 to 1909. The only known reference to the piece is in a history of the Redcoat Band written in 1962, which briefly mentions the march as “Georgia’s first original school song” and notes that “all copies of the work have been lost.”

So Winstead, associate director of UGA’s Willson Center for Humanities and Arts and a former Redcoat Band member, was surprised to find a music store in Eldridge, N.D., selling the piece on eBay. He bought it for $12.50 and now has it in a protective plastic sleeve in his office. He plans to give it to the university’s Hargrett Library for rare and historic documents.

Winstead doesn’t know when or how the piece ended up in North Dakota. The music store owner told him she couldn’t remember how she got it but suspects she picked it up on a buying trip through the South.

The four-page score, written for piano and not in a band arrangement, is dedicated to the “University of Georgia Cadet Corps.” The cover features a young woman in a Victorian-era long black dress and red high-button blouse waving a red flag. Along one side of the cover is a banner with ribbons and footballs. The bottom of the cover has a large version of the UGA Arch.

Winstead found the music on eBay while searching for old song books for his doctoral dissertation, which deals with singing in American colleges in the years 1636-1860. Although it wasn’t pertinent to his own research, it seemed such an oddity that he decided to try to track it down.

The only information he’s found is in the first history of the Redcoat Band, written in 1962 by band member Andrew Davidson as a master’s degree project. Winstead is trying to contact Davidson, who is believed to live in Paris, to see if he learned anything more about the march.

“The most important thing,” Winstead said, “is that Davidson took the time to interview Haughey and others in 1962. Without the oral history he obtained, little would be known about the early days of the UGA band program or the significance of this piece of music.”

According to the history, Haughey, born in 1882, was a professional musician who owned a music store in Athens and led a popular dance orchestra. When a UGA military professor decided to organize the university’s first band in 1905 to provide music for military functions, Haughey agreed to be the unpaid director.

His band was a crew of 20 young military cadets, some of whom had no musical training. With no money for equipment, most band members furnished their own instruments and Haughey supplied reeds for wind instruments and handled repairs. He also provided music and taught music lessons. He spent the summer of 1906 in Chicago studying band conducting and arranging under Frederick Innes, a well-known professional band leader. That instruction helped him arrange and compose music for the band, probably including the “Red and Black March,” according to the history.

A video/audio recording of the march is available online at www.video.alumni.uga.edu/page5/page5.html.