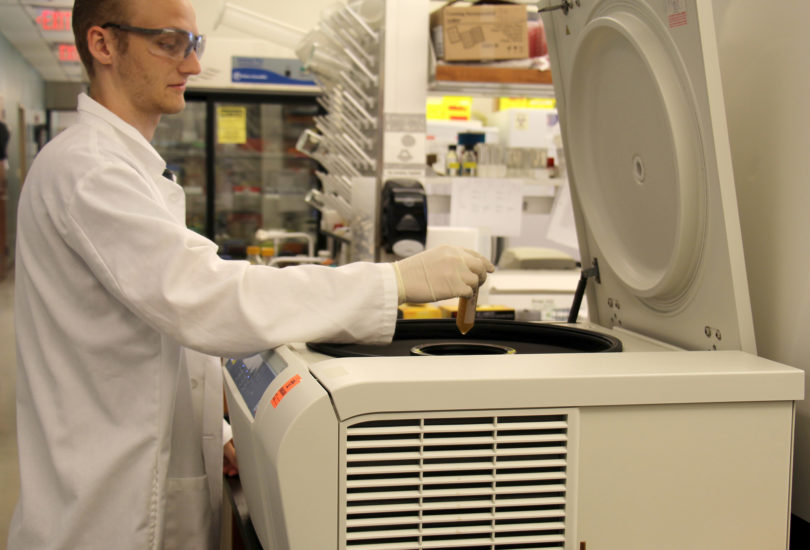 Student assistant Dylan Orr works in the lab at the Center for Tropical and Emerging Global Diseases.

Athens, Ga. – An international team of researchers led by infectious disease experts at the University of Georgia has received $5.2 million from the National Institutes of Health to develop a more accurate, affordable diagnostic test for Chagas disease, a parasitic infection that kills more than 50,000 people each year in Central and South America.

Caused by the parasite Trypanosoma cruzi and spread by blood-feeding insects commonly known as “kissing bugs,” Chagas disease is considered by many to be the most neglected of the neglected tropical diseases. While it is endemic to Latin America, Chagas disease is a growing threat in the U.S. and Europe.

Currently, there are only two drug treatments available; however, their usage is limited due to severe adverse reactions and the length of treatment required.

“Fortunately, there are a number of new drug discovery efforts in Chagas disease. But a major limitation is the difficulty in comparing the relative efficacy of current drugs to newly developed ones,” said Rick Tarleton, UGA Athletic Association Distinguished Research Professor of Biological Sciences in the department of cellular biology and Center for Tropical and Emerging Global Diseases. “One simply can’t wait for 10 years (as current protocols require) to determine if a new drug is better than the existing ones.”

In Chagas disease, the number of parasites in chronically infected individuals is extremely low, making detection of parasites an unreliable test to determine if an individual is infected. Instead, the researchers have focused on the body’s response to infection by measuring the unique antibodies that the immune system creates in response to exposure to T. cruzi.

Tarleton and his UGA colleagues have already developed a successful multiplex blood test that measures antibodies to multiple T. cruzi proteins. While their test has proven to be useful in the laboratory, it is also expensive.

“By monitoring a broader range of immune responses, we can achieve a rapid and reliable detection of changes in these responses after treatment. And moving from the current bead-based assay to an array platform makes the reagents and the detector for reading the assay much more affordable,” said Tarleton.

The “gold standard” for determining a cure is for a patient to convert from seropositive to seronegative, meaning that a blood test does not detect any T. cruzi antibodies. The conventional blood test requires a minimum of 24 months to show a decline in antibody response, and complete conversion to a negative blood test can take up to 10 years.

Over the past 12 year, the Tarleton laboratory and CONICET research scientist Susana Laucella’s laboratory in Argentina have shown antibodies tested by the multiplex method are potential surrogate indicators of treatment success. They believe this method will detect significant decline in antibody levels in less than 12 months.

In an effort to more rapidly determine treatment success, the project will also investigate additional potential markers of patients being cured, including antibodies to carbohydrate epitopes and changes in numbers of plasmablasts, the cells that secrete antibodies.

“We are looking for the earliest signs of treatment efficacy,” said Tarleton. “As parasite numbers are reduced due to treatment, we expect, based on data from other systems, that one of the first detectable changes will be in the immune cells that are responding to the presence of parasites and producing antibodies, the plasmablasts.”

The researchers will also be exploring the phenomenon of spontaneous cure-a cure in the absence of treatment-as only anecdotal information is currently available.

“The immune response to T. cruzi infection is actually very strong and as a result, spontaneous cure occurs,” said Tarleton. “However the frequency of cure without treatment is not known, nor are methods available that discriminate between those with active, chronic infections and those who have cured.”

Approximately 20 percent of individuals receive mixed results from conventional blood tests for T. cruzi infection. This is a large number of potentially infected people to leave untreated. However, current therapies have such severe side effects doctors often do not prescribe. Additionally, understanding why some individuals can “cure themselves” could lead to new treatments for the disease.

“The key to the success of this project will be the bringing together of basic research findings with great technology and access to patient groups and their samples-some collected over decades. That is what the partners in this work collectively bring to the problem,” said Tarleton.

Tarleton is joined by collaborators at the Blood Systems Research Institute, the University of California, Irvine, Emory University as well as partners in Argentina and Brazil. Their project is supported by the National Institutes of Health under award number R01-AI125738.