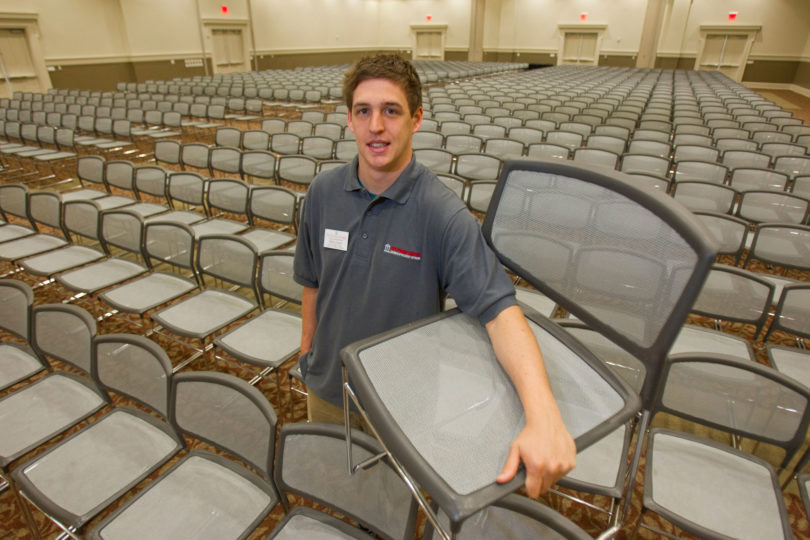 As student manager for event services in the Tate Student Center

Even if he hadn’t won Student Employee of the Year, senior Adam LaHaie would still be remembered on campus.

As student manager for event services in the Tate Student Center, the marketing major from Oconee County has worked to ensure hundreds of special occasions happen as planned.

“I get to see so many students coming through the Tate Center every day. For us, it’s event after event after event. But for the people who are having these events, this is their one big night or one big day of the year,” LaHaie said. “To be there and see that process through and see those smiles after they’ve put on their big day, for us it’s very rewarding.”

On a daily basis, he schedules event set-ups and breakdowns and manages inventory and maintenance of equipment. He is also involved in the performance review of student employees, which he said is another reason he works as hard as he does.

“For the amount of time I spend at the Tate Center and with the people on my staff, those people have really become like my brothers, sisters and best friends—whether it be the professional or student staff, I’m really fortunate to work with such amazing people,” he said.

LaHaie was honored as Student Employee of the Year by the Career Center in an April 11 ceremony that  recognized the top 100 UGA student workers. LaHaie was picked for the top spot ahead of more than 500 entries.

“Adam quickly became recognized throughout the Tate Student Center as the kind of student employee who is reliable, produces quality work and exhibits professionalism well beyond his years,” she said. “He helped create a new scheduling system for the student workers and worked to change the culture and rid the student crew of negativity, bad attitudes or outright laziness.”

Runner-ups for the annual award were Michael Mooney from Ellijay, a student manager at Oglethorpe Dining Commons; and Lyndsey Adams from Hoschton, the communications intern in the Alumni Association’s public relations department.