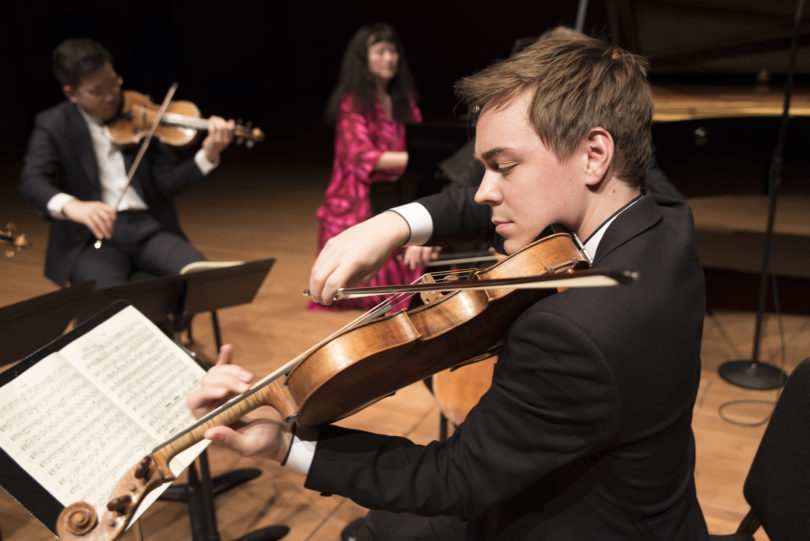 Members of the Chamber Music Society of Lincoln Center will perform works by French composers at 7:30 p.m. concert on Jan. 21 in the Performing Arts Center’s Hodgson Hall.

Han was a recipient of Musical America’s Musician of the Year Award and has risen to international prominence through her wide-ranging activities as a concert performer, recording artist, educator and cultural entrepreneur. Together with cellist David Finckel, she co-founded ArtistLed, classical music’s first musician-directed and Internet-based recording company.

Huang is the recipient of a prestigious Avery Fisher Career Grant in 2015 and a 2017 Lincoln Center Award for Emerging Artists. He has recently performed with the Mariinsky Orchestra, the Detroit Symphony, the Houston Symphony, the Taipei Symphony and the National Symphony Orchestra of Taiwan. Winner of the 2011 Young Concert Artists International Auditions, Huang earned both bachelor’s and master’s degrees at the Juilliard School. He plays on the 1742 ex-Wieniawski Guarneri del Gesù on loan through the Stradivari Society of Chicago.

Lipman has appeared with the Minnesota Orchestra, BBC Philharmonic, Academy of St Martin in the Fields, Wisconsin Chamber Orchestra, Juilliard Orchestra and at Chicago’s Symphony Center. The Strad praised his “most impressive” debut album, Ascent, released in 2019, and his recording of Mozart’s Sinfonia Concertante with violinist Rachel Barton Pine and Sir Neville Marriner topped the Billboard charts. A native of Chicago, Lipman is on the faculty at Stony Brook University and performs on a 1700 Matteo Goffriller viola on loan from the RBP Foundation.

Greensmith was a member of the world-renowned Tokyo String Quartet from 1999 until 2013, giving more than 100 performances each year in venues that included Carnegie Hall, Sydney Opera House, London’s Southbank Centre, Paris Châtelet, Berlin Philharmonie, Vienna Musikverein and Suntory Hall in Tokyo. In 2019, he became the artistic director of the Nevada Chamber Music Festival and was appointed director of chamber music master classes at the Chigiana International Summer Academy in Siena, Italy.

The Chamber Music Society of Lincoln Center’s Athens concert will be recorded for broadcast on American Public Media’s Performance Today.