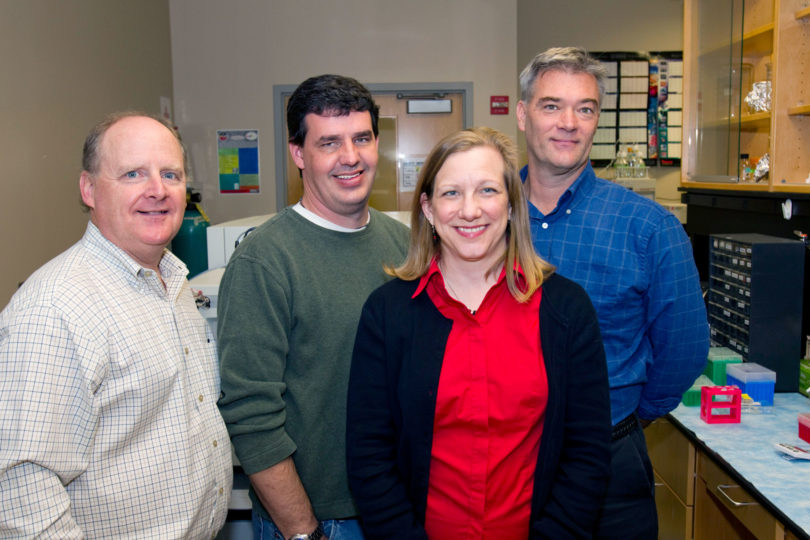 Embryonic stem cells hold great promise as a potential cell-based therapy for myriad serious diseases, but there is still much to learn before they become a regular part of the doctor’s toolkit.

Scientists do not yet fully understand the complex processes that take place during the earliest stages of development when stem cells in the embryo begin to transform into specialized cells that can be used to regenerate bones, tissues and nerves.

Now, researchers at UGA have discovered changes in molecule structures on the cell surface that may play critical roles in this stage of embryonic growth. Their work not only promises to further the understanding of basic human development, but it also may speed the creation of effective stem cell therapies.

Their study, published recently in the Journal of Biological Chemistry, demonstrated how the genetic expression of specific enzymes resulted in significant changes to the complex chains of sugar molecules that densely coat the outside of cells.

Known as glycans, these molecules were once thought to be a relatively unimportant part of the cell. Scientists now recognize that glycans play essential roles in the regulation of cell behavior and, ultimately, human health and disease.

“Glycans control the societal interactions of cells,” said study co-author Michael Tiemeyer, Franklin College of Arts and Sciences professor of biochemistry and molecular biology and a member of the Complex Carbohydrate Research Center. “They control how cells interact with each other and how they interact with their environment.”

Glycans are among the most biologically complex molecules in the body and can take many forms depending on which kind of cell they adorn and the tasks they must regulate. Scientists know that glycans take on new forms during the earliest stages of development when stem cells in the embryo begin to transform into more specialized cells. But until now, scientists have been unable to determine the detailed structures of these molecules and how these changes are controlled.

“This study gives us greater insight into how glycans change during development, and hopefully it will give us leads into new glycan structures that play important roles in human development,” said co-author Kelley Moremen, Franklin College professor of biochemistry and molecular biology and a member of the CCRC. “It’s really the first step in understanding how changes in glycan structures are associated with changes in gene expression during stem cell development.”

The altered glycan structures regulate the actions of the hundreds of cell types found within the adult human body so understanding the mechanisms by which cells initiate glycan change is critical if they are ever to be manipulated in a lab and deployed as potential therapeutics.

If stem cells can be matured into adult cell types for use in treatment for disease, there is an additional complication of delivery to the diseased tissue. Cells coated with appropriate glycans may provide an effective mechanism for targeting cells for appropriate delivery to the affected tissue.

“One of the main functions of glycans is to get cells out of the bloodstream and into the tissues where they’re supposed to go,” Tiemeyer said. “If we understand how glycan expression is regulated, then theoretically we should be able to turn on the right glycans and get the cells to go where we want them to go and do what we want them to do.”

The study was the collective effort of several research labs in the CCRC including the labs of Moremen, Tiemeyer, Lance Wells, Michael Pierce and Will York as well as the lab of Steve Dalton in the department of biochemistry and molecular biology.