The kitchen is often classified as the most important room in the house. For chef Jorge Noriega, it means so much more. 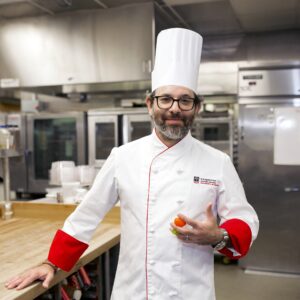 Whether a house or restaurant, the kitchen is where people congregate, share the details of their lives with each other and where so many friendships are made.

“I consider [the kitchen] my safe place at work; I can tune everything out from the world,” said Noriega, the associate director for culinary development and executive chef for the University of Georgia’s Dining Services. “Building things from hand, tasting, making things—that is what I enjoy most in the kitchen.”

In 2021, Noriega was named the Premier Culinary Creations Award Winner. He said that is where he thrives—bringing a creative dish together from scratch. Noriega believes his love for culinary arts came from his home country, Panama. He described Panama as a giant mixing pot, with many diverse cultures making up the country. The environment helped create a deep love and understanding for his art. The goal, he said, is for people to see who chef Noriega is from his dish.

Noriega recently took his gourmet talents to the Culinary Challenge at the National Association of College and University Food Services (NACUFS) 2022 National Conference, held this year in Spokane, Washington. He was one of six finalists in the competition.

The challenge began with live tournaments at the regional levels. The chefs prepared their dishes, using this year’s mandatory ingredient, turkey, in front of a live audience of university food service providers from across the region.

The regional winners—including Noriega—advanced to the national conference. The NACUFS Culinary Challenge recognizes the exceptional talent and skills necessary for chefs to bring their creations together. Noriega prepared a twice-cooked turkey breast with sautéed greens, rice, peas and a red pepper romesco sauce. He believes this dish gives an impression of everywhere he has traveled to cook. “You will see Spain, Memphis, New York, California and now here in Georgia,” he said.

Dining Services is proud to have such a renowned chef leading its culinary mission. “Executive Chef Jorge Noriega brings culinary vision, diversity and inclusivity to the menu at UGA,” said Susan van Gigch, director of Dining Services. “His knowledge and skill with cuisine from around the globe allow all students to find a little bit of home while away from home.”