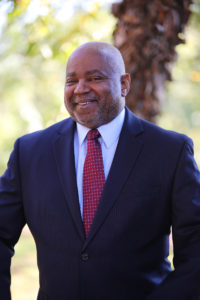 A leading authority on child welfare has been appointed the Pauline M. Berger Professor in Family and Child Welfare in the UGA School of Social Work.

Harold Briggs, a professor at the school, is nationally known for his innovative studies focused on putting families first in child welfare systems of care. He has been instrumental in identifying and describing welfare service areas that need greater coordination and in developing programs that give children, youth and families more voice in the planning and delivery of services.

“Harold Briggs’ scholarly record and passion for reducing health disparities and behavioral health challenges that affect marginalized children, youth and families makes him an excellent fit for this position,” said Anna Scheyett, dean and professor of the school. “As Berger Professor, he will be a powerful advocate for more culturally responsive and evidence-based approaches to serving those populations in Georgia and beyond.”

The holder of the Berger Professorship conducts research on the effects of state and federal policies and legislation on children, youth and families, advocates on their behalf and advances instruction and student understanding of child and family well-being issues.

Prior to earning his doctorate Briggs was a social work practitioner and associate executive director of Habilitative Systems Inc., a Chicago-based nonprofit behavioral and mental health services agency. His firsthand knowledge of the problems that families face has informed his research, which examines, among other things, consumer-friendly practices such as placing different service providers in one location and giving youth a voice in policy development and implementation.

Briggs also is a senior scholar with the Williams Institute at the University of California, Los Angeles, which focuses on research on child welfare and juvenile justice policy pertaining to LGBT communities.

In addition to his scholarship, Briggs’ writing skills have brought significant funding to the school and child well-being organizations. A proposal he wrote for a graduate-level, interprofessional behavioral health and social work training program at the school was awarded $1.3 million in federal funding and was recognized as a national model for such programs. Funding awarded to another proposal helped to launch the Georgia Parents Support Network, an advocacy organization for families of children with mental health disorders.

Briggs received a Bachelor of Arts in sociology from Morehouse College. He earned his graduate and doctoral degrees in social work from the University of Chicago. He has served on the School of Social Work’s faculty since 2012.

The Pauline M. Berger Professorship in Family and Child Welfare was established in 2002 to honor its namesake’s contributions to the social work profession. Berger served on the school’s faculty from 1966 to 1976 as both assistant professor and admissions director. Before joining the school’s faculty, Berger was a caseworker in child welfare.