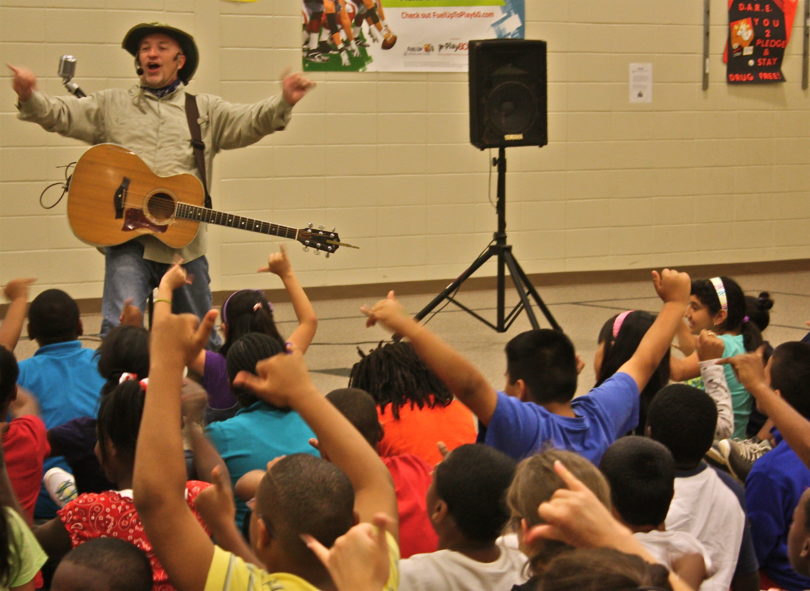 Award-winning children’s musician Roger Day and the students from Winterville Elementary School create their own cloud of marsh insects. (Photo by Cheryl Summers

One hundred and fifty students crowded into the school’s gymnasium on April 27 and sang and laughed while learning about the landscape and critters of the coast.

“Roger Day creates vivid images of the marsh and its inhabitants-including the marine biologists-in songs with titles such as ‘I Love to Study Mud’ and ‘Alligator in My Refrigerator,'” said David Bryant, assistant director of Georgia Sea Grant and organizer of the event. “The songs, which are both funny and educational, highlight the importance of habitat and watershed health, the abundance of creatures that depend on the state’s water resources, and how individuals can help protect the coastal ecosystem.

“It was exciting to see a very active mass of fully engaged kidssinging along with Roger’s songs while at the same time knowing thatin the midst of all of that fun they were picking up valuable conceptsto help them understand marshes and rivers and the ocean,” said Bryant. “Roger really understands how to deliver content so subtly that youdon’t realize that the good-time tune you’re singing to yourself alsopacks an educational wallop.”

The music was inspired by a five-day residency program at the University of Georgia Marine Institute on Sapelo Island, where Day tagged along with scientists and learned about the rich and complex barrier island ecosystem. Georgia Sea Grant commissioned Day to put the experience to music by creating the program of songs for elementary school children. The material in the songs addresses state science teaching standards for grades three through five.

To help the children understand the ecosystem topics presented in the songs, Georgia Sea Grant worked with Jennifer Cole, an instructional coach at Winterville Elementary School, to create lesson plans that teachers use to educate their classes about the science in the songs before the performances.

“Any way that we can make the curriculum fun and accessible is where we want to go,” said Cole. “Any time that you can attach learning to music, it helps children make it their own in terms of knowledge.”

Georgia Sea Grant, which is one of 32 state programs funded by the National Sea Grant, promotes education and outreach directed at creating a balanced approach toward land use, economic development and ecosystem health in the coastal region of Georgia.