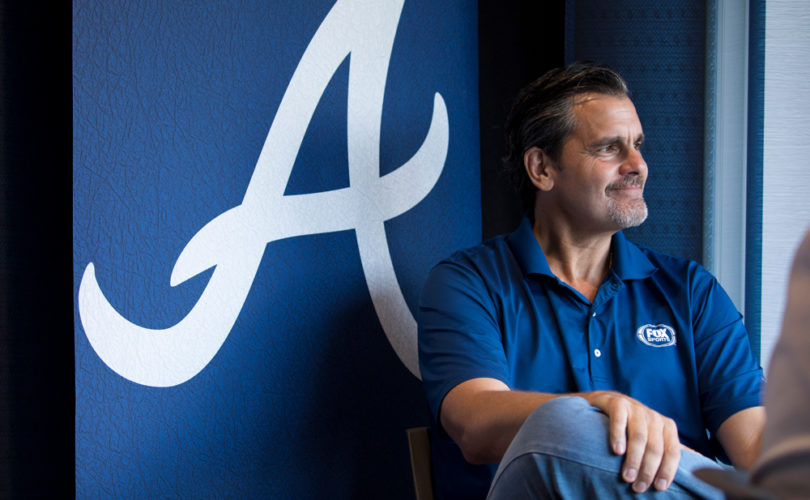 Chip Caray ABJ '87 has been the play-by-play voice of the Atlanta Braves since 2004. His partner for his first four years on the job was his father, Skip. (Photo by Andrew Davis Tucker.)

If you are a baseball play-by-play guy and your last name is Caray, it can be a lot to live up to. Preceded in the booth by his legendary grandfather Harry and father, Skip, Chip Caray learned long ago how to navigate the complications of his name.

In 1997, after seven years as the voice of the NBA’s Orlando Magic, Caray was hired to work alongside Harry, the much-beloved Hall-of-Fame voice of the Cubs. Caray was excited about the role for many reasons, not the least of which was the opportunity to close a familial loop with his famous grandfather, whom he did not know well.

Sadly, the pairing wasn’t meant to be as Harry died just before Spring Training in 1998. That meant Chip, who had a decent amount of experience (albeit in basketball, not baseball), was stepping into the shoes of a man who was arguably the most famous person who’d ever done the job, in a new city with an unfamiliar (and passionate) fan base, almost cold.

“My first game, I’m sitting behind Harry’s desk, with his microphone, his producer, his director, his partner, his fan base, and his last name trying to make my own name for myself in a business that’s very personality driven. That was hard. Really hard,” Caray says with understatement. “My dad said later, ‘You know, in hindsight, there were only two people in the world who could have done that job: you or me. And you did a helluva job.’”

Chip Caray recalling May 13, 1991, the day he, Harry, and Skip broadcast a Cubs-Braves game together, becoming the first (and only) three-generation booth in MLB history:

“It was the first time Harry, who was an orphan, understood that there was a living, breathing lineage here. I look at the pictures now and think about how meaningful that had to have been for my grandfather.”

That acknowledgment from his father has long meant a great deal to Caray. The familial loop he was unable to close with his grandfather was made whole after Chip moved to Atlanta in 2004 to broadcast Braves games with his dad, with whom he remained close until Skip died in 2008. Since that time, Chip has made the Braves job his own.

The way he’s done it also doubles as advice he’d give to any young broadcasters just starting out: Be yourself.

“There are so many people who want to sound like Vin Scully or Gary Thorne or Skip Caray that their soul and personality gets ripped out of the broadcast,” he says.

“I sound like me, warts and all. Have the confidence to put yourself out there in a medium where you being you is going to generate a lot of love and sometimes a lot of not-so love. Have the strength and character to be able to withstand that.”

Caray, fortunately, doesn’t have to withstand it alone. Since Scully’s retirement in 2016, every MLB booth contains at least two people. For FOX Sports South, Caray’s partner for the last 10 years has been former major league outfielder Joe Simpson. Over that time, Caray’s energetic delivery has blended nicely with Simpson’s been-there-done-that straightforwardness to create an easy chemistry that wasn’t necessarily easy at the start.

“Chemistry is different with different people,” Caray says. “I’m hyper. I’m fired up every day. I got that from my grandfather. Joe is more like my dad. ‘OK, this is exciting, but calm down, son.’ Our relationship has evolved the last couple years and it’s turned into a tremendous partnership.”