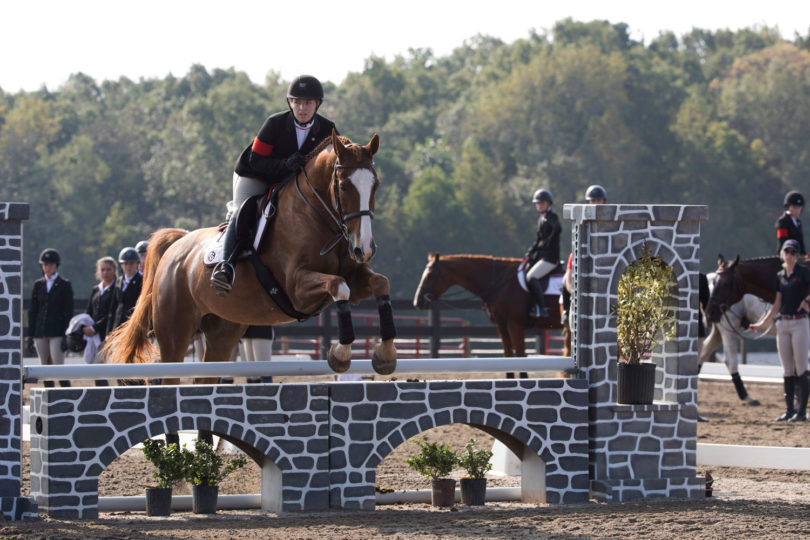 Freshman Sam Gastelum guides Aragorn over a fence during the annual Red and Black scrimmage. With six national titles to its credit, Georgia's equestrian team is the university's second most successful. (Photo by Peter Frey/UGA)

A look at UGA equestrian in and out of the arena 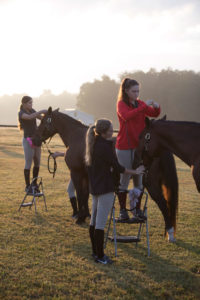 It’s 6 a.m. on a fall Saturday south of Athens.

It’s pitch dark. Crickets chirp, breaking the morning silence. Barely anyone is on the road.

The barn is a different story. The lights are bright; ’80s music ranging from Stevie Nicks’ “Edge of Seventeen” to Prince’s “1999” blares from the speakers throughout the 24-stall barn, mixing with the whinnies of the horses inside. The farm staff have already been up and working for over an hour.

One of those early risers, Regan Rivas, has served as the barn manager for the University of Georgia equestrian facility for the past four years. It’s a job she lives and breathes—literally. Rivas lives in the apartment on the second floor of the barn. Usually, the horses get fed at 7 a.m., but today is different. It’s scrimmage day, the annual Red and Black scrimmage to be exact, so the horses are getting an early start on breakfast. They have a big day ahead. 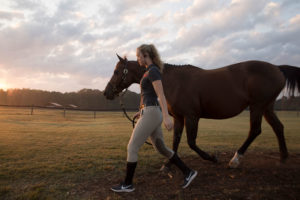 The riders start to filter in about half an hour later, checking the giant whiteboards on the wall in the middle of the barn to see where their assigned horses are. Some are lucky; the horses they’re supposed to prepare for competition are securely locked in their barn stalls. Others, like junior Grace Bridges, aren’t so fortunate.

She heads out to B-5, the fenced-in pasture that’s the farthest away from the barn, to wrangle Carson, a 17-year-old Oldenburg gelding with a glossy brown coat and white stripe down his nose. He’s competing in both of the English-style events today. Carson’s not interested at first, tossing his head up so she can’t get ahold of him. So Bridges tricks him into thinking she has a treat for him—it’s actually only grass—and gets him ready to go. She does, however, apologize profusely to him about her deception.

It’ll take Bridges about an hour to finish braiding Carson’s mane. “You want to get here early so you get the good braiding supplies,” 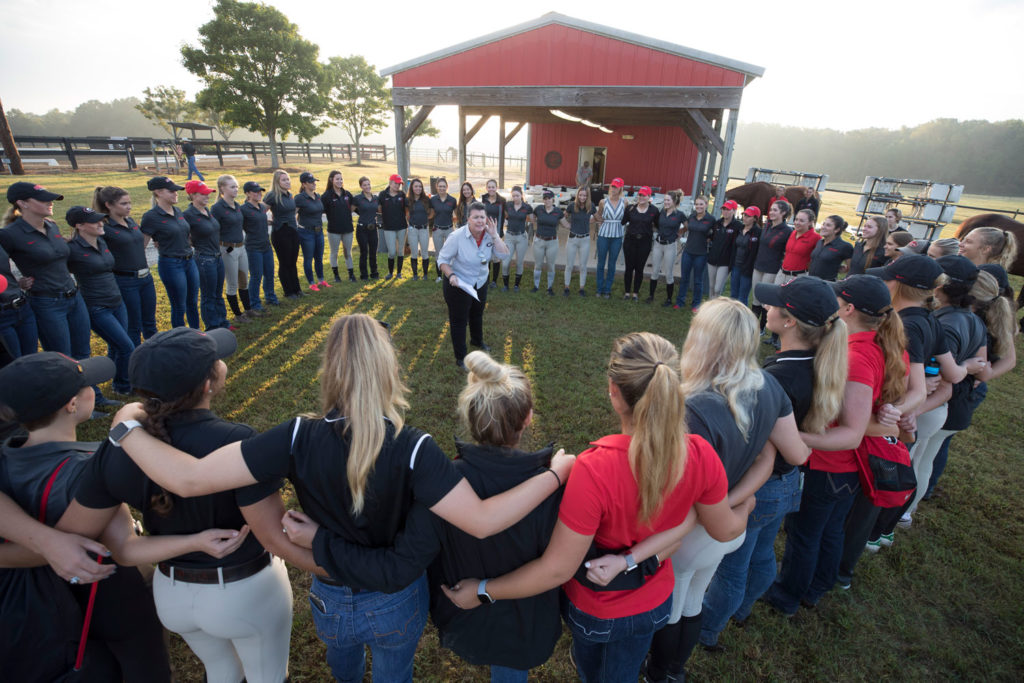 Head coach Meghan Boenig (center) leads the team in a chant before the scrimmage begins. (Photo by Peter Frey/UGA)

Bridges says. Those supplies look a lot like what typically clutter women’s bathroom countertops: TRESemmé hairspray to add some grit and hold to the horses’ manes, clear hair clips to section off chunks of hair, and purple shampoo to bring out the white in some of the horses’ coats. Grooming is an important part of preparation. In competition, a horse’s appearance is part of the scoring.

It’s Carson’s first meet day. Like all of UGA’s 62 horses, he was donated, arriving at the end of the Spring 2018 season. Trainers and riders from all over the country donate horses to UGA; some even come from alumni. 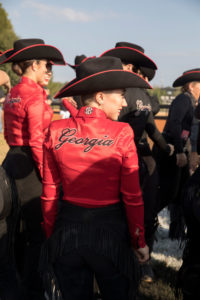 Cassidy Scott, one of the Western competitors, shows off the riding jacket and cowboy hat Western riders wear during competition. (Photo by Peter Frey/UGA)

Most of the other competition horses are in the barn getting groomed by 7 a.m. Braids are pulled up into little buns for the English competitors, banded mini-ponytails for the Western horses to help their hair lie flat. Some of the horses even get hair extensions for their tails. At around 7:30 a.m., Carson and many of the other horses get a quick hose-down before heading to the outdoor pavilion where the competitors gather for a group breakfast (eggs, fruit, and biscuits for the riders; grass for the horses) and team meeting prior to starting warm-ups.

Head Coach Meghan Boenig is at the center of it all. She’s been with UGA since the Bulldogs’ equestrian program debuted in 2001 and is the force behind the team’s six national titles—a success rate at UGA second only to gymnastics. The equestrian team also has earned three SEC titles (including back-to-back wins in 2017 and 2018) and countless other awards and accolades under Boenig’s leadership.

When Boenig first arrived at UGA to establish the university’s 21st varsity sport (12th for women), she knew she’d be building the program from the ground up. At the time, equestrian was an emerging NCAA Division 1 sport for women; now, three other SEC schools boast teams, along with 13 others nationally, and UGA was and continues to be a leader. UGA’s inaugural season saw Boenig and the team capture their first national championship title, followed by another the following year. 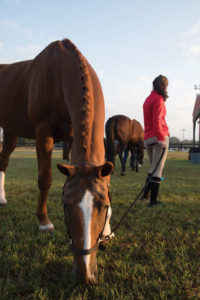 Paris fuels up on grass before her event, Equitation over Fences (Photo by Peter Frey/UGA)

Her commitment to the team—in and out of the competition ring—hasn’t gone unnoticed. Boenig has been named the SEC Coach of the Year award four times, including 2018, and coached numerous riders to SEC Rider of the Year, National Collegiate Equestrian Association Rider of the Year, and All-America titles, among other awards.

But for Coach M, as the athletes call her, it’s not all about winning titles.

“My hope going into every season is that we find success in all that we do, whether that be in the arena, whether that be in building relationships with each other,” Boenig says. “This sport and this team are much bigger than just the results of a meet or a championship.”

That emphasis on building a sense of community within the equestrian roster of more than 60 riders has created a family-like atmosphere.

“Equestrian is turned into such an individual sport when you’re competing in high school or in the junior championships— it’s just you and your horse competing against everyone else,” Bridges says. “At Georgia, you’re not only riding for yourself; you’re riding for your best friends, and your roommates, and your school. The support system is unlike any other area of equestrian that’s out there.”

With riders from 24 states and one from Ontario, Canada, that closeness goes a long way in making Georgia feel like home. 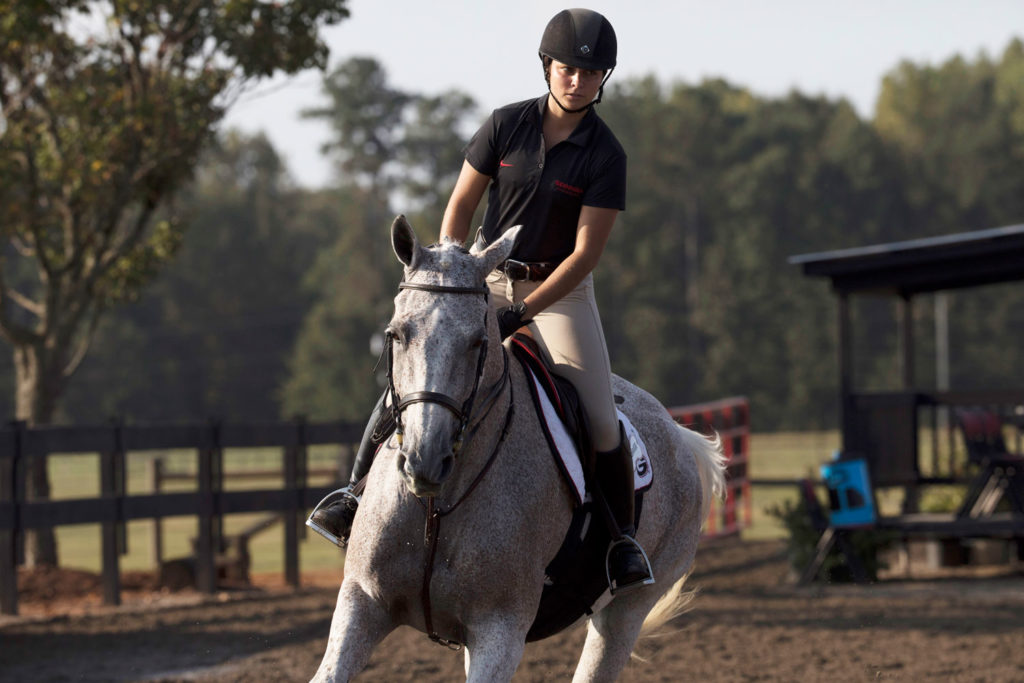 Like their riders, horses need warming up before competition. Here, senior captain Emma Mandorino readies George for the arena. (Photo by Peter Frey/UGA)

“I was a walk-on and didn’t know what to expect, but what I found is 65 other girls who were raised the same way I was and have the same passion for these horses and doing what we love,” says senior and New Jersey native Emma Mandarino, who’s pursuing a Double Dawg degree in finance and accounting. “There’s a camaraderie that you can’t really find anywhere else.”

It’s that sense of belonging that brought Sara Parr AB ’15, a former All-SEC rider on the 2014 NCEA National Championship and 2015 SEC Championship team, back after graduating. She wasn’t quite sure what she wanted to do with her life, but she was sure of two things.

“I knew that I liked horses, and I knew that I loved Georgia,” Parr says. Ultimately, the horses, the team, and Coach M brought Parr back to her alma mater as assistant coach for Western events, her expertise in college.

“Georgia breeds excellence, whether it’s academics or athletics,” Parr says. “It sets us apart. Being part of a team that is bigger than yourself as a competitor—winning championships is great and all—but it’s those relationships you build that prepare you for your future and give you lifelong friends.” 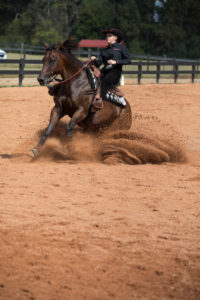 Sophomore Julia Spring brings Peppy to a stop during the Reining event. (Photo by Peter Frey/UGA)

During the team meeting before the scrimmage, Boenig tells the team that she expects the riders to be in the stands cheering on their teammates as they compete. But they’d probably be there anyway.

Boenig reminds the athletes that there’s “nothing finer than putting on the red and black.” Then the competing athletes head back to the barn area to get dressed: crisp white button-downs with black riding jackets and helmets for the English riders, cowboy boots and hats with big belts and chaps for the Western.

At 9:30 a.m., the team gathers at the G in front of the competition rings for a group cheer. Standing arm-in-arm in the center of the circle formed by their teammates, the four captains—Mandarino, Graysen Stroud, Alexis Mougalian, and Annabeth Payne—lead a chant, yelling lines like “There’s nothing finer in the land than a UGA equestrian. Go Dawgs!” with their teammates shouting back every line. The enthusiasm is infectious.

Then the competition begins. One English- and one Western-style event take place simultaneously in separate arenas, with spectators sandwiched in between. First up are Equitation Over Fences, where riders maneuver the horses through a course set with fences to jump over, and Horsemanship, which focuses on the rider’s ability to seamlessly execute precise patterns using only subtle cues to the horse. Freshman Natalie Stoyko, of team Black, posts an impressive 85 on horse Aragorn, winning Stoyko Most Outstanding Player (MOP) for fences. Freshman Miller Lantis takes the honor for horsemanship, riding Otto to a score of 71½. 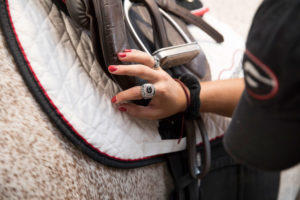 A rider proudly wears her 2018 SEC Championship ring at the Red and Black scrimmage. (Photos by Peter Frey/UGA)

After halftime, the final two events begin: Equitation on the Flat, which involves an English routine performed on a flat, fenced-in arena, and Reining, the other Western event that sees the riders take the horses through a series of fast and slow circles and abrupt stops. MOPs for those events were junior Stella Martin (on Manny) with a 94 and sophomore Taylor Staton (on Peeko) with a 70½.

“One misconception about equestrian is it’s often perceived as the horse doing all the work,” Boenig says. “What we really see is an incredible group of hard-working women who put everything they can into this sport. These riders are taking an animal who, I promise, does not want to jump over that fence or volunteer to do any of the things they do in competition, and they’re moving literally 1,000 pounds in patterns that appear seemingly simply. That grace and that ability make them incredible athletes.”

When it’s all said and done a couple of hours later, Black beats Red, 13-9. But it’s a promising showing for the future of the UGA team, as many of the riders are only freshmen.

Then it’s back to the barn to hose off the horses; take out their braids; and get them fed, watered, and turned out to the field or back into their barn stall. Both the horses and the riders have earned some time off.

That is, at least, until Monday’s practice.