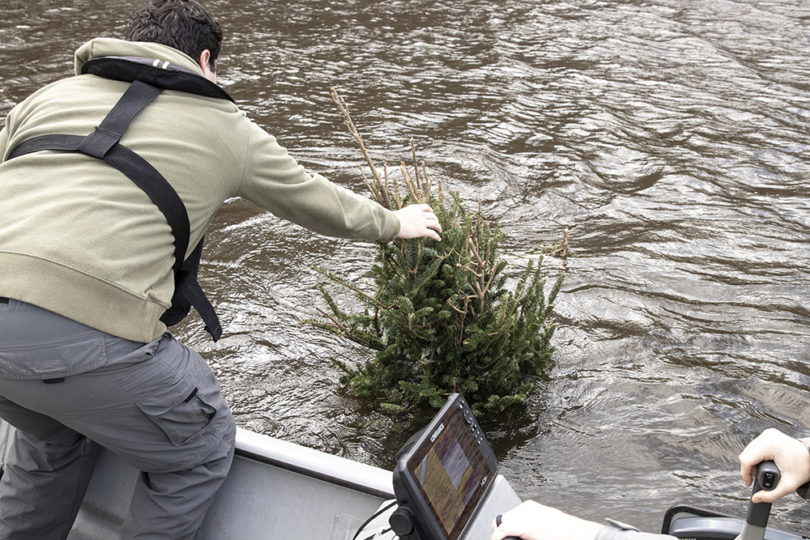 Using the reds and oranges on his digital map as a guide, graduate student Wesley Gerrin guided the small motorboat over the drop spot.

Within seconds, the two other lab assistants in the boat were up and heaving wood and concrete over the side. There was a spray of needles and a whiff of pine, and the tree was gone.

The crew out on the University of Georgia’s Lake Herrick wasn’t engaged in some sort of contraband operation, though—they were actually helping to improve the fish habitat in the man-made lake. By dropping discarded Christmas trees in key portions of the lake, their branches become places of refuge for fish and, over time, help improve the quality of the lake bottom. 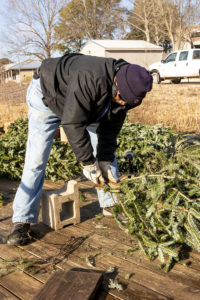 Anthony Myrick, a forestry technician with the UGA Warnell School of Forestry and Natural Resources, prepares Christmas trees to be dropped in Lake Herrick. (Photo by Kristen Morales)

The tree-drop event is the brainchild of undergraduate Jordan Horvieth, a fisheries student who also works part time for Athens-Clarke County’s Stormwater Management division and as a lab assistant at the Warnell School of Forestry and Natural Resources. About a year ago, Horvieth was surfing the internet and considering the end of the Christmas season when she stumbled upon an idea: Using discarded Christmas trees as fish habitat.

“I really love Christmas trees, so I wanted to see ways they could be upcycled,” she said. “And I stumbled upon this.”

Horvieth and her fellow students used sonar to map the bottom of Lake Herrick and determined there was a need for additional fish habitat—over the years, the bottom had become awash in sediment, and the original woody structures had all decayed.

Warnell professor James Shelton said dropping trees into older lakes is one of the best ways to reestablish fish habitat. “We know, because we monitor these areas with sonar, that the woody structure actually attract fish,” he said. “The limbs and branches attract smaller fish—they offer them places to hide—and as the fish accumulate in those areas, they attract the predators. And so, in addition to being a better habitat for fish, it also tells anglers where to go to fish.”

Working with the county, Horvieth and her team received a delivery of several dozen discarded Christmas trees. They pulled the trees out of the pile two by two, stuck their trunks into concrete blocks and fastened them with a piece of scrap wood across the bottom. The trees were then lined up along the dock, where they were picked up by Gerrin and his crew to be dropped in specific places throughout the lake.

“At certain depths there will be optimal habitat for crappie and other species,” Horvieth said. “So, we mapped out the lake and that determined where we were going to put the trees.” 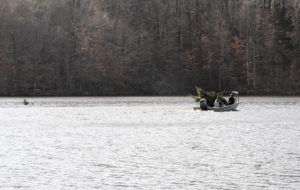 The crew of lab technicians from the Warnell School of Forestry and Natural Resources makes their way out to the next Christmas tree drop site. (Photo by Kristen Morales)

Even though this is the second year the team dropped trees, it will take several more years to determine how it affects the fish population. But, Shelton said, the lake is constantly monitored through several classes that meet there, including fisheries management, aquatic biology and population dynamics classes. “That allows us to maintain a database over time of the changes in the fish population,” he said.

All told, the team dropped about 30 trees.