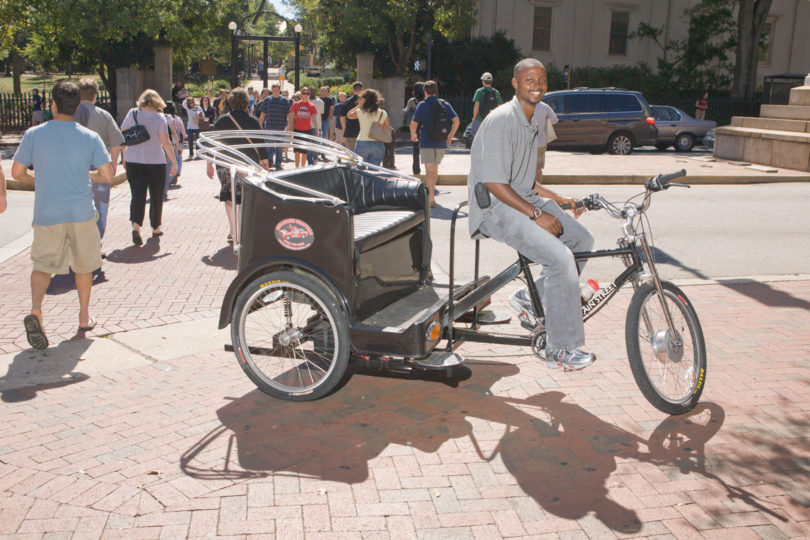 Even before you meet ­Michael Hitchcock, you can tell he’s driven.

Most every day, from before lunch to closing time, the Dawg Pedaler shuttles riders two at a time from points A to B in his rickshaw, relying on nothing more than his charm and a pair of strong legs.

The business, Athens’ first pedal cab, was the brainchild of Doug Bachtel, a professor of housing and consumer economics in the College of Family and Consumer Sciences. The idea came to him after mulling over ways to combat Athens’ poverty dilemma.

But after Bachtel shared his idea with the Athens-Clarke County Human Economic Development department, there was a concern, the functional impasse of starting a rickshaw business: Athens is a hilly town.

Luckily Hitchcock, a slim 34-year-old who worked for UGA’s Athletic Association for 10 years, is up to the challenge.

“I probably do a loop around downtown 30 times a day,” he said.

There’s a small motor on his rickshaw, but most of the time, he relies on “pure leg power.”

While Athens is home to two bus services and a handful of taxis, the rickshaw’s personalized style and green credentials mean the ride is more than just different-minded transport.

“The actual concept is great because I like the idea of reducing cars, and using bikes not just for leisure activity, but for economic development,” said Catherine Hoag, community economic development coordinator at the HED. “It shows people there’s a way to get around without getting in your car and not as time consuming as a walk.”

Hitchcock operates in a one square-mile radius from the Arch. So far, the bulk of riders have been students, and frequently at night. Many clients say they enjoy the feeling of class and style that comes from being whisked away in an open carriage.

“A lot of the young girls I pick up tell me they feel like celebrities because everyone is looking at them,” he said. “They do homecoming queen waves.”

There’s support to expand further on campus. Professors with distinguished guests or deans interviewing faculty can treat visitors to a unique view of campus on the rickshaw, and he’ll greet you at the door of your building.

Bachtel sees the concept as a tool to battle Athens’ poverty problem. The town, is in dire need of new business to pull itself out of poverty.

“We don’t need low-paying jobs. We need entrepreneurs who can expand and hire more people,” he said.

In other words, Hitchcock is pedaling his way to a better life and richer community. He plans to buy a second rickshaw next month and hire two part-time drivers. And, armed with an uncommon drive to succeed, he’s partnered with local businesses.

Hitchcock plans to offer historic rides through downtown, shuttling visitors past the double-barreled cannon and other Athens landmarks.

“That is part of our land-grant mission,” Bachtel said. “We have to take the services and research done at the university and supply it out into the world to really utilize that philosophy.”

A single ride on the rickshaw runs $5, but Hitchcock is available for weddings or birthday parties at an hourly rate. Interested parties can arrange rides with him by calling (706) 614-8002.