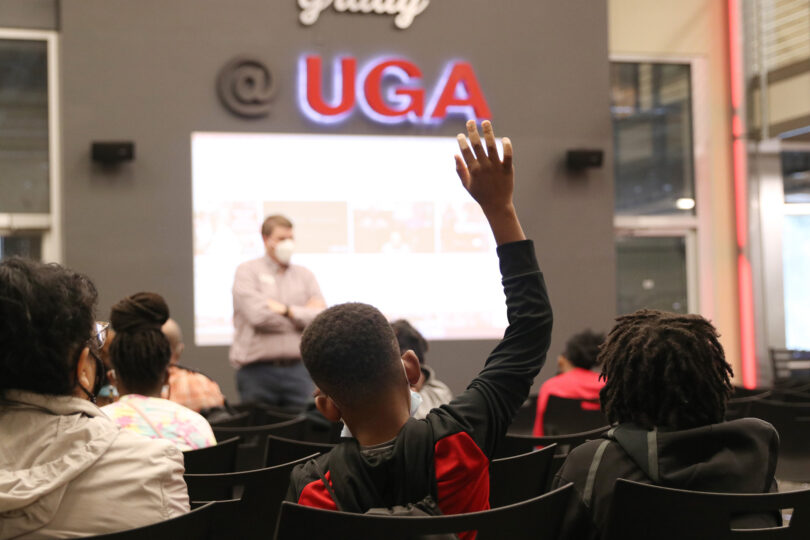 Athens-Clarke County student Aiden Dowdy prepares to ask a question to Dayne Young, host of the "UGASports Live" podcast, at a campus visit on Oct. 6. (Photo by Sarah Freeman)

Rick Dunn excitedly turns to a group of nearly 15 Athens-Clarke County students at the conclusion of a short introductory film about Grady College narrated by college Dean Charles Davis.

“Dean Davis is a Clarke Central grad,” Dunn says with pride in his voice.

Dunn, who earned a journalism degree from UGA in 1993, is CEO and executive producer of MEU Radio Athens, an initiative he created in 2009. The program introduces radio and broadcasting skills to fifth- to 12th-grade students and encourages them to graduate from high school. 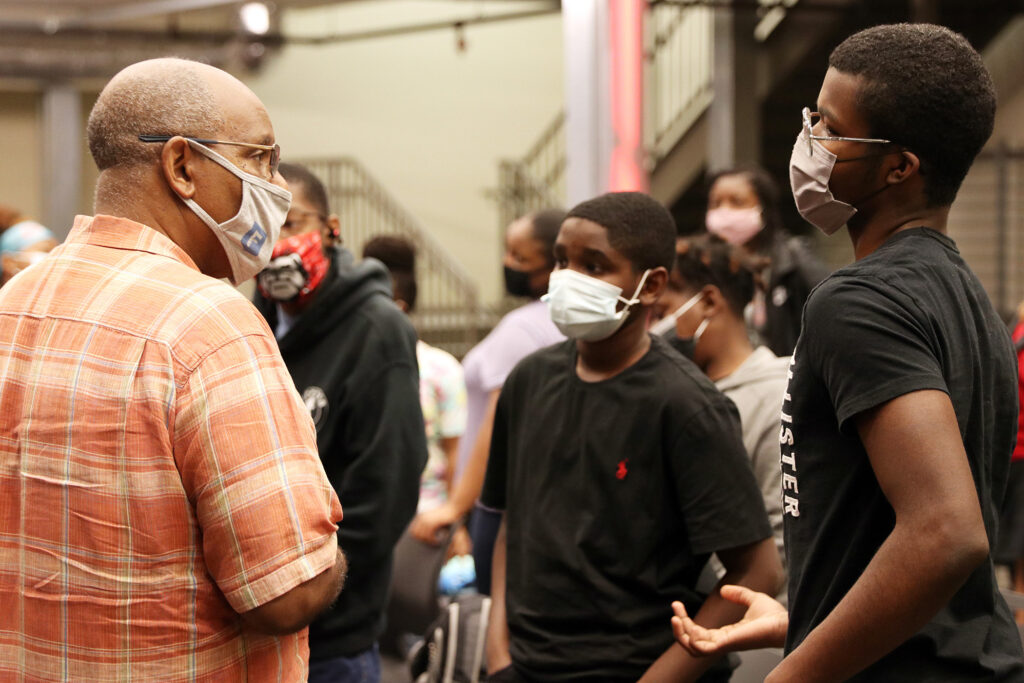 Rick Dunn (left), CEO and executive producer of MEU Radio Athens, talks with two of his students, Kaden Monterio (center) and Freddrell Green, during their tour of Grady College on Oct. 6, 2021. (Photo by Sarah Freeman)

“I would like to help them navigate through hard times into a life that is much more productive,” Dunn said.

Dunn’s students produce programming for an internet radio station including podcasts and sports broadcasts, as well as projects like school announcements. Dunn estimates about 70% of the alumni from his program graduate from college with a degree in mass communications.

After meeting with Alison McCullick, director of community relations at the university, Dunn and McCullick got an idea. The pair connected with Stephanie Moreno, the scholastic outreach coordinator at Grady College, and Josh Podvin, assistant director for community partnerships with UGA Public Service and Outreach, to plan a tour for CCSD students. The students’ visit to UGA would include talks from current students, alumni and professionals in the journalism and broadcasting fields and explore the importance of higher education and career possibilities.

Alexia Ridley, an anchor for WUGA radio, spoke to the students during the campus experience. She began her talk by saying she was familiar with the students’ work with MEU Radio, and they were already ahead of where she was when she attended college.

“I can’t believe that you guys do what you do … it’s really good,” said Ridley. “College will enhance what you already have.”

Students from WUOG radio and freelance podcasters Dayne Young and Kim Landrum also spoke about broadcasting, while Helen Mahaney provided an overview of the college.

Cemya Stone, a freshman at Clarke Central and audio engineer for MEU, was inspired after hearing from UGA students like DonA Traylor-Askew, a fourth-year journalism major. Traylor-Askew, who is also earning a certificate from the Carmical Sports Media Institute, talked about her experience managing social media accounts for some of Clarke Central’s sports teams last fall. She also shared about her involvement in producing “The First Five,” a documentary about the first Black UGA football players, three of whom are Clarke Central alumni. 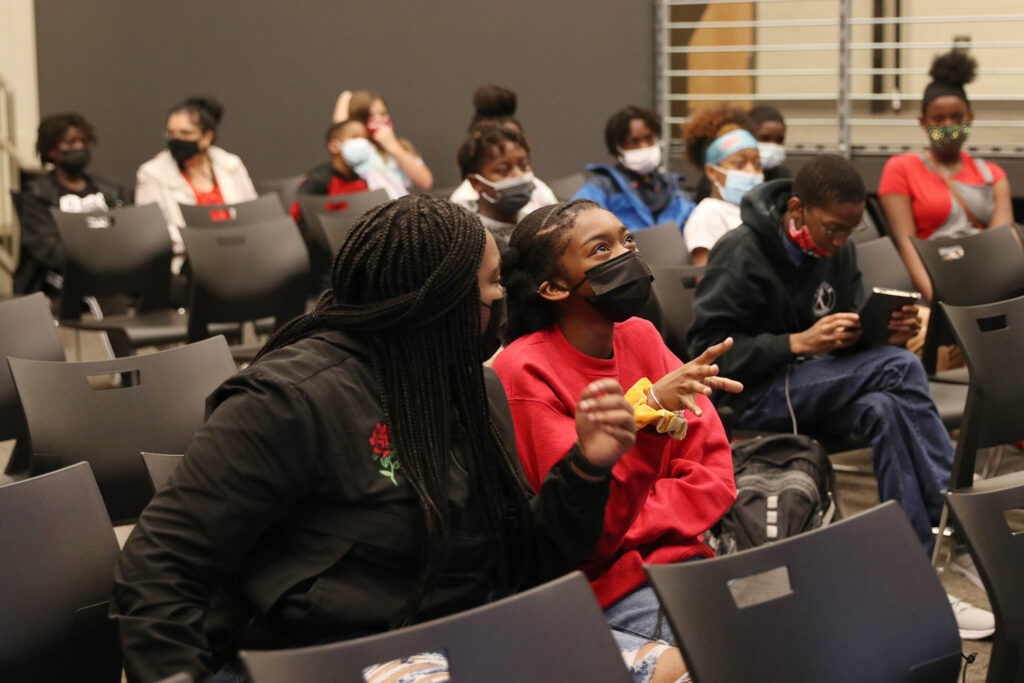 “It was really fulfilling to hear from students giving us their perspective,” Stone said. “They aren’t too much older than we are, and we are going to be there in a few years. If they can do it, we can do it, too. We just need a little bit of insight.”

Makenna Mincey, a junior from Clarke Central who is considering a career in communications, said she had never been to Grady College.

“I think the biggest lesson I learned is to appreciate the opportunity that I have been given,” Mincey said. “It also taught me that if I want to go to the next level, I need to continue to build and grow.”

The University of Georgia participates in more than 50 partnerships with Clarke County schools, and Dunn wants to expand those opportunities. Over the past few months, he has worked with David Hazinski, a Grady College professor emeritus, to design a small television studio where his students can broadcast news shows. Dunn left the visit with several new ideas and a faculty introduction to Carlo Finlay, who he connected with about potential partnerships between Grady College students and CCSD students.

Tours like this one give students perspective and teach them to focus, according to Tymisha Creightney, a sixth-grade teacher at Burney-Harris-Lyons Middle School who also serves on the MEU board.

Creightney said the tour was beneficial to many of Dunn’s students who have not seen the university from an academic perspective.

“The thing I appreciated the most about today is that it showed our kids that people who look like them are in this capacity and what they are doing is working,” Creightney said. “Our students who are interested in journalism saw that they could get there.”

The tour concluded with lunch at Bolton Dining Commons, providing the students a chance to mingle with college students.

“I like that UGA is [in] the heart of Athens and that they have partnered with us,” Creightney concluded. “Even if the students don’t attend UGA, they get a taste of what college is like beyond just football. I want to thank the University of Georgia for looking out for our kids and being leaders in the community.”