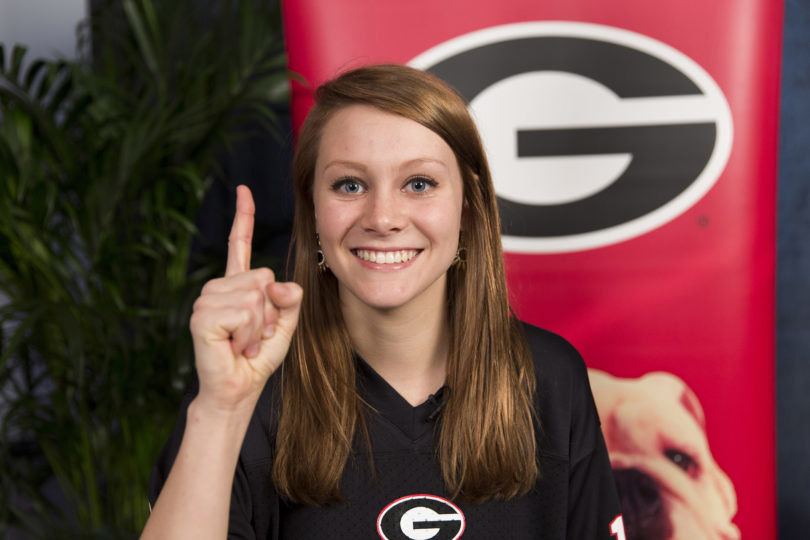 MacKenzie Tobin, a senior at Schley County High School in Ellaville, received an early surprise as the first of more than 7,500 students to be offered admission to the Class of 2020 at UGA.

Her application was among a record 14,516 received by the university for early action admission—an increase of nearly 10 percent over the previous year—and in mid-November UGA officials notified her in person that she was being offered admission. Students like Tobin have applied to UGA in record numbers, and they’ve also set records for academic accomplishments.

The average GPA of students who were admitted through early action admission was 4.11, which exceeds last year’s average GPA of 4.01 and reflects rigorous coursework and an average of eight honors, International Baccalaureate and Advanced Placement classes. The average best SAT score this year was 1395—compared to 1374 last year—and the average ACT score increased by one point over last year to reach 31.

“MacKenzie was the first of more than 14,500 students from across Georgia and around the world to apply to UGA, and her outstanding academic accomplishments earned her a spot in our Class of 2020,” said Patrick Winter, associate vice president for undergraduate admissions and enrollment management.

Prospective first-year students have two application options at UGA: Early action applicants are considered for admission based solely on their grades, the rigor of their high school curriculum and the results of their SAT or ACT scores.

The early action application deadline was Oct. 15, and on Nov. 20 students learned whether they have been admitted, denied or deferred to the regular decision pool.

Regular decision applicants are reviewed at a later date, which gives students more time to work on their application and enables them to submit test scores after the early action deadline and to include grades from the first semester of their senior year. The regular decision deadline is Jan. 15, and decisions typically are released in mid-March.

“Students who have been deferred still have a shot at being part of the Class of 2020, and I encourage them to complete the second part of their UGA application to be reconsidered along with the regular decision applicants,” Winter said.

Tobin and the rest of the Class of 2020 will have unrivaled learning opportunities thanks to a new experiential learning requirement that will ensure that students complement their classroom knowledge with internships, study abroad, service-learning, research or other forms of hands-on learning. Such experiences have been shown to enhance learning and to position students for success after graduation, and UGA is the largest public university in the nation to ensure that each of its incoming students engage in experiential learning.

“The Class of 2020 will be the university’s first to benefit from our bold and ambitious experiential learning initiative, and I look forward to welcoming them to campus,” said UGA President Jere W. Morehead.