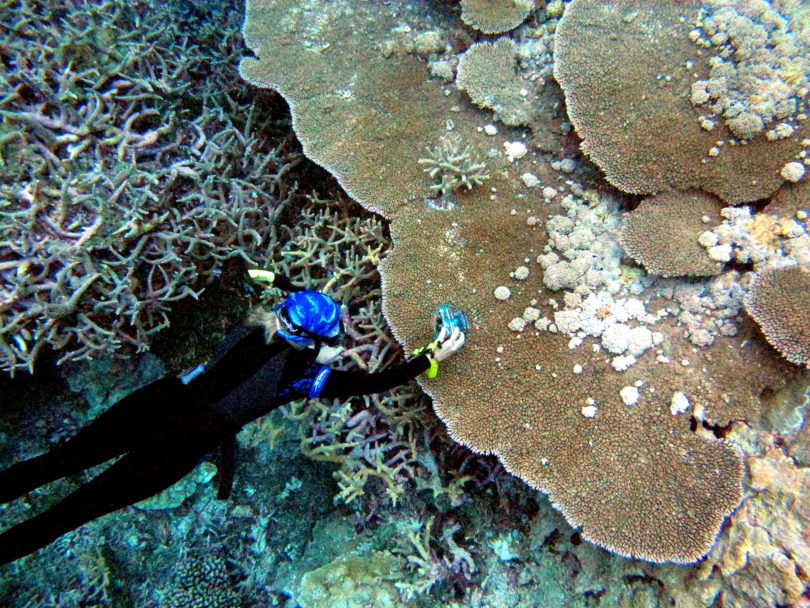 Sonia Altizer has a long-term research project on monarch butterflies

Athens, Ga. – Climate change is affecting the spread of infectious diseases worldwide, according to an international team of leading disease ecologists, with serious impacts to human health and biodiversity conservation. Writing in the journal Science, they propose that modeling the way disease systems respond to climate variables could help public health officials and environmental managers predict and mitigate the spread of lethal diseases.

The issue of climate change and disease has provoked intense debate over the past decade, particularly in the case of diseases that affect humans, according to the University of Georgia’s Sonia Altizer, who is the study’s lead author.

“For a lot of human diseases, responses to climate change depend on the wealth of nations, healthcare infrastructure and the ability to take mitigating measures against disease,” said Altizer, an associate professor in the UGA Odum School of Ecology. “The climate signal, in many cases, is hard to tease apart from other factors like vector control and vaccine and drug availability.”

Climate warming already is causing changes in diseases affecting wildlife and agricultural ecosystems, she said. “In many cases, we’re seeing an increase in disease and parasitism. But the impact of climate change on these disease relationships depends on the physiology of the organisms involved, the location on the globe and the structure of ecological communities.”

At the organism level, climate change can alter the physiology of both hosts and parasites. Some of the clearest examples are found in the Arctic, where temperatures are rising rapidly, resulting in faster developing parasites. A lungworm that affects muskoxen, for instance, can now be transmitted over a longer period each summer, making it a serious problem for the populations it infects.

“The Arctic is like a ‘canary in the global coal mine,'” said co-author Susan Kutz of the University of Calgary and Canadian Cooperative Wildlife Health Centre.

“Climate warming in the Arctic is occurring more rapidly than elsewhere, threatening the health and sustainability of Arctic plants and animals, which are adapted to a harsh and highly seasonal environment and are vulnerable to invasions by ‘southern’ species—both animals and parasites.”

A changing climate also is affecting entire plant and animal communities. This is particularly evident in tropical marine environments such as the world’s coral reef ecosystems. In places like the Caribbean, warmer water temperatures have stressed corals and facilitated infections by pathogenic fungi and bacteria. When corals—the framework builders of the ecosystem—succumb, the myriad of species that depend on them are also at risk.

“Biodiversity loss is a well-established consequence of climate change,” said coauthor Richard Ostfeld of the Cary Institute of Ecosystem Studies. “In a number of infectious disease systems, such as Lyme disease and West Nile virus, biodiversity loss is tied to greater pathogen transmission and increased human risk. Moving forward, we need models that are sensitive to both direct and indirect effects of climate change on infectious disease.”

Where human health is concerned, there is not only the direct risk from pathogens like dengue, malaria and cholera, all of which are linked to warmer temperatures, but indirect risks from threats to agricultural systems and game species crucial for subsistence and cultural activities.

The study was funded in part by the National Science Foundation.

“We need to transcend simple arguments about which is more important—climate change or socioeconomics—and ask just how much harder will it be to control diseases as the climate warms?” Ostfeld said. “Will it be possible at all in developing countries?”

To respond to that challenge, Altizer and her colleagues—Kutz, Ostfeld, Pieter T. J. Johnson of the University of Colorado Boulder and C. Drew Harvell of Cornell University—laid out an agenda for future research and action.

One recommendation is to expand data about the physiological responses hosts and parasites have to temperature changes to help develop early warning systems.

“We’d like to be able to predict, for example, that if the climate warms by a certain amount, then in a particular host-parasite system we might see an increase from one to two transmission cycles per year,” Altizer said. “But we’d also like to try to tie these predictions to actions that might be taken.”

Such forecasting is well established in crop disease management and has been used to both preventatively close coral reefs and target areas at risk of malaria outbreaks.

“We face a tough task in the oceans, where disease outbreaks can be out of sight and undetected,” Harvell said. “Because some coral disease outbreaks are predictable from warming events, we are developing forecasting programs to help us respond before the outbreak begins.”

The researchers also pointed out that certain human communities, such as those of indigenous peoples in the Arctic, could be disproportionately impacted by climate-disease interactions.

“A better understanding of the impacts of parasitism on wildlife health, and an ability to make accurate predictions of future wildlife sustainability, is particularly important to aboriginal people across the Arctic who depend on wildlife as a source of food, income and a focus of cultural activities,” Kutz said.

Johnson continued, “Because disease represents the product of multiple interacting species, including hosts, pathogens and other members of the food web, forecasting responses to ongoing climate shifts is a tremendous challenge,” he said. “Given the rising importance of infectious diseases not only for human health but also wildlife conservation, it’s also a challenge for which we are in sore need of a solution. We hope our work contributes to that.”