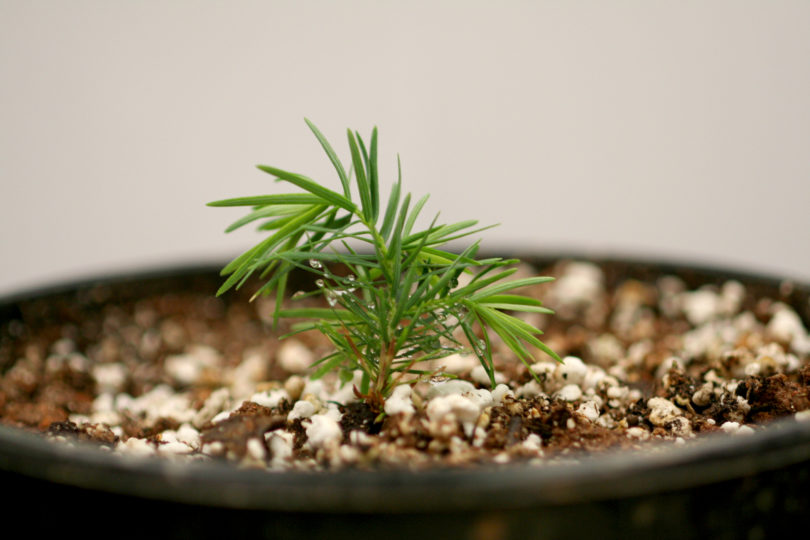 A Carolina hemlock somatic seedling grows in a pot in Scott Merkle's lab in the UGA Warnell School of Forestry and Natural Resources. (Credit: Changho Ahn/UGA)

Athens, Ga. – For the first time, University of Georgia researchers have successfully cryogenically frozen germplasm from hemlock trees being wiped out across the eastern U.S. by an invasive insect. They’ve also unlocked a new way to clone the few hemlock trees apparently fighting off the hemlock woolly adelgid, which could potentially lead to a solution for the pest.

In a new paper published in Trees-Structure and Function, researchers in UGA’s Warnell School of Forestry and Natural Resources outline how they were able to generate hemlock tissue cultures, cryogenically store them and then grow plants from the cultures after thawing them several months later—the first to successfully do so.

As part of their efforts to freeze the germplasm, they also developed a method that will allow them to clone hemlocks, particularly important as they seek to propagate trees naturally resistant to the insect that has destroyed millions of hemlocks in 18 states since it was accidently introduced into the eastern U.S.

There are only two native hemlock species in the eastern U.S.—eastern and Carolina—and both are in terrible danger from an insect that first appeared in Virginia in the 1950s. The hemlock woolly adelgid, a pest native to East Asia, kills hemlocks possibly by injecting a toxin into the trees while feeding on sap. It has spread from Virginia and virtually exploded in the Appalachians, said Warnell professor Scott Merkle.

“It looks like a bomb went off where there were once pure hemlocks,” Merkle explained. “It’s just dead trees because there doesn’t seem to be much natural resistance.”

Merkle, who is also Warnell’s associate dean of research, was lead author on the paper and worked with Warnell researchers Paul Montello, Hannah Reece and Lisheng Kong.

Hemlocks protect stream banks from erosion, provide food and shelter for deer and other wildlife and keep trout streams cool with their shade. Because of its importance to forest ecosystems, researchers say it is vital that the tree be preserved.

One 2009 study by the U.S. Forest Service said woolly adelgids could kill most of the hemlocks in the Appalachian region in a matter of years if the insect remain unchecked. Unfortunately, researchers are not yet sure how the insect is even killing hemlocks. They believe that it is inserting its stylet-a sharp, pointed nose-under the leaf, through the base and into the tissue that carries sugar around the tree. The tree then essentially shuts down, loses needles and eventually dies.

A number of researchers are studying ways to fight the infestation, including the possibility of introducing some sort of biocontrol or predator to eat the adelgids. Merkle is looking at ways to not only introduce natural resistance to newly planted hemlocks, but also to successfully store hemlock germplasm cryogenically to conserve it in case a solution isn’t found before they are wiped out.

Long-term storage of hemlock germplasm has been hindered because seeds from the trees have lost viability after being stored under refrigeration after two to four years, meaning that once planted, they won’t germinate and grow into thriving plants. The U.S. Forest Service is growing collections of hemlocks outside the range of the adelgid to conserve their germplasm, but this approach requires maintenance of the trees in areas where hemlocks are not found naturally.

Merkle and his research team took a different approach to standard storage methods: Using seeds from surviving hemlocks collected by cooperators at the Alliance for Saving Threatened Forests and North Carolina State University, they created in vitro cultures of a number of eastern and Carolina hemlocks that they then froze in liquid nitrogen at 196 degrees Celsius below zero—something no one else had successfully done. The researchers cryofroze several samples from different hemlock lines from around the Southeast for several months, then thawed them out, allowed them to re-grow and began to produce trees from them. Of the five hemlock lines they tested, all samples of three Carolina lines and one eastern hemlock line regrew after coming out of cryostorage.

Merkle says the ability to cryostore and recover hemlock cultures, followed by production of new trees from them, provides a practical approach for storing the germplasm of a large number of trees indefinitely, so that the species can be repopulated once a system to deal with the adelgid is in place.

Being able to grow them after they’re thawed won’t make them resistant to the woolly adelgid, Merkle said, but it does mean that if need be, researchers might be able to save samples of the hemlocks from extinction. These cultures also allow the researchers to assist with testing other methods of introducing resistance to the insect, including trying to create clones of hybrids with Asian hemlocks that do have a natural resistance to the woolly adelgids.

Some individual hemlock trees in the U.S. appear to be naturally resistant, Merkle said, so he and his team are working on ways to determine if the resistance is genetically based. They’ll do that by collecting seeds from these trees that have survived the insect infestation and creating embryogenic cultures that they can then use to clone single trees. Because these surviving trees are all genetically different researchers can’t really tell what key factor makes them resistant to the woolly adelgid.

But if 20 trees are planted that are all members of the same clone, clonal testing can be done to try to narrow down why particular trees can fight the pest. And once a genetic line is identified that is resistant, Merkle said, “You can then hand seedlings out to people to start planting.”