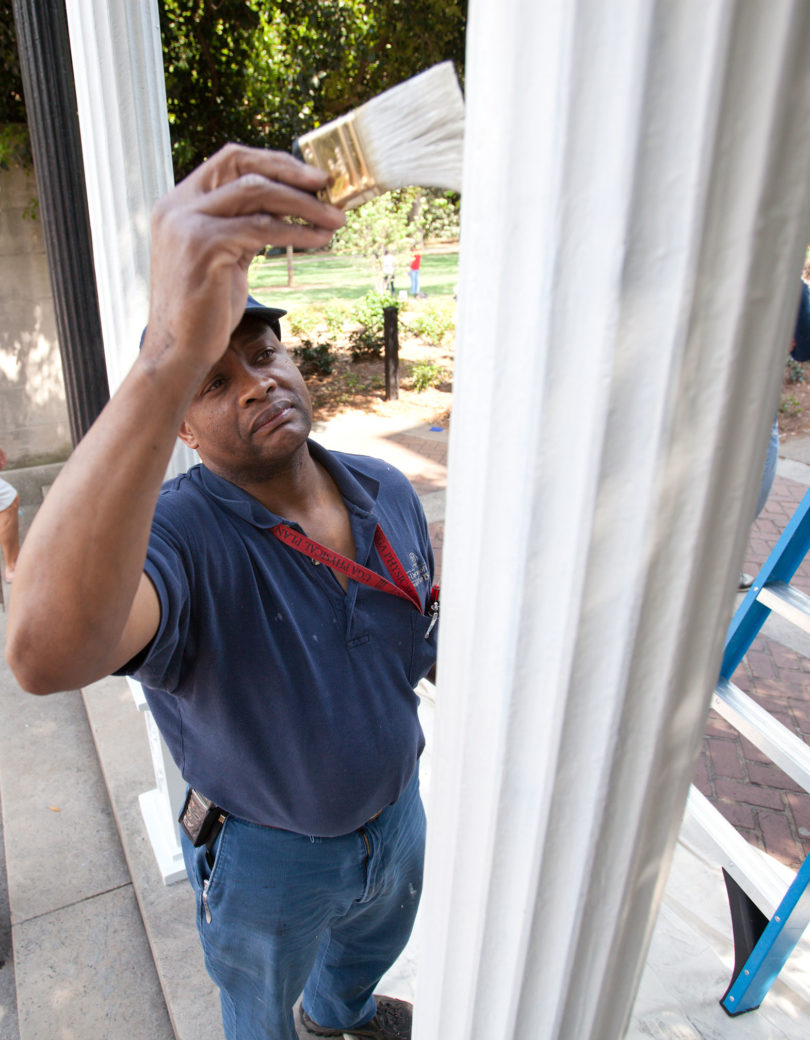 Painter Al Blackmon of the UGA Physical Plant paint shop puts a white primer on the Arch as part of the painting process. The primer was soon covered with two new coats of black paint.

For a few hours in April, the University of Georgia’s iconic Arch was white.

But the color change was short-lived as university painters soon painted the white primer black and returned the Arch to its traditional black by 11 a.m. April 23.

The color change was part of a three-day makeover project for the iron structure.

First, painters from the Physical Plant used grinders with wire brushes to sand off 26 years worth of paint coats and graffiti. Once the 1/8-inch of build-up was removed, the Arch got a new base coat and then two fresh coats of direct to metal paint.

“It’s more than just a paint job,” said Bill Bailey, a foreman in the Physical Plant who oversaw the job. “We’re trying to coat it, protect it and do our best not to damage it. It’s a symbol of the university and it needs to be taken care of.”

The Arch is touched up approximately every two to three years. Flaking paint is scraped off and it gets a new topcoat. April’s project was the biggest since the structure was last stripped in 1984.

The painters stripped dozens of layers of paint, including a lot of graffiti and a few layers of Georgia Tech yellow.

“After the Georgia Tech game, we have to come up and cover the graffiti quite often,” said Jeff Morris, a painter with 27 years experience at UGA.

In one layer of paint, the Arch’s center column was entirely yellow. Morris said that paint had been there since the 1980s when vandals painted a gold T on the Arch shortly after the Arch was last stripped.

With significantly less layers of paint on the Arch, some of the structure’s more intricate details are now more obvious. The leaf detail on the rounded top of the Arch stand out more as do the small wreath details at the bottom of each of the three posts.

“You couldn’t see the details in the work, because it was full of paint,” said Bailey. “The details on the finials and copings are more clear and crisp than they were.”

Even the grooves on the posts were filled with paint, so it looked like a solid round surface.

“The reaction’s all been really positive,” said Bailey. “The only thing people have been wondering is if we’re leaving it white, if we’re changing the color of the Arch. We’re not.

“Everybody wants to know what’s going on-because it’s such an icon for the university,” Bailey added.

The Arch dates to the mid 19th century, when it was created by the Athens Foundry out of three lampposts and the top of a boiler-parts the company had on hand. The Arch originally contained the same finials, or ornamental tops, used on the North Campus fence.

And the Arch wasn’t the only North Campus structure to get a spring-cleaning. The iron lampposts on North Campus also got a fresh coat of paint to match.