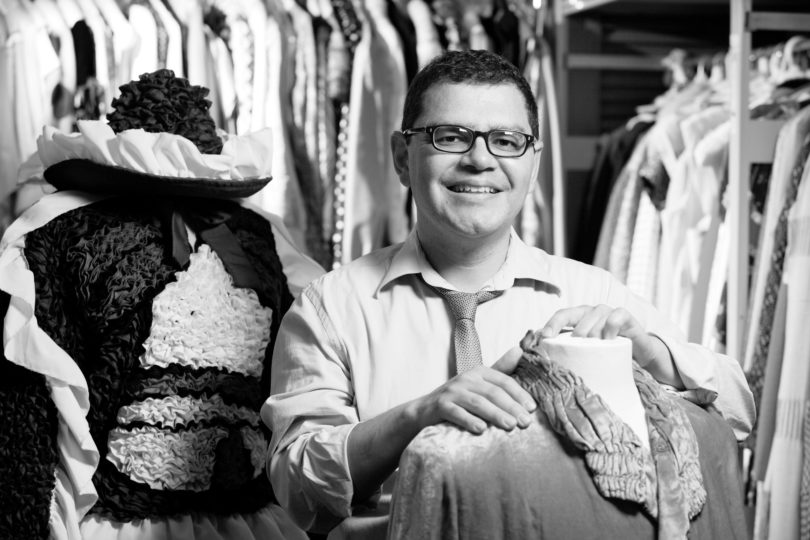 To those who question the validity of fashion research, José Blanco asks for just five minutes.

“Everyone interacts with clothing every day,” said the assistant professor of textiles, merchandising and interiors in the College of Family and Consumer Sciences. “Whether we spend a lot of time thinking about what we wear or don’t think about it at all; either way it says something about who we are.”

Blanco, who is in charge of the FACS historic costume collection, teaches courses on the history of fashion, clothing and textiles, as well as courses on fashion-centered museum exhibitions. He also worked closely with the family of the late Billy Carter, former President Jimmy Carter’s brother.

“Billy Carter used clothing as a way to create characters,” Blanco said. “What I learned from interviewing his wife and children was that he was a very thoughtful person and his private self wasn’t at all like the image portrayed in the media. But he liked to say things to make people uncomfortable and he knew how to play that role.”

Blanco’s interest in clothing dates back to his childhood and helping his Aunt Teresa organize her workshop.

“She was the best seamstress in town, but her workshop was a mess,” said Blanco, who recalls spending hours organizing rickrack, ribbons and other items. “I was fascinated by what she was doing, but I never learned to sew.”

Blanco’s first choice of majors was history, but he faced resistance from his family who said “I’d be poor my whole life.”

As a compromise, he double-majored in agriculture and theater until scheduling conflicts arose during his final semesters when he was required to be in both the field for his agriculture classes and on the stage for his theater requirements and theater won out.

His focus on historic fashion began while finishing his Ph.D. at Florida State University. A colleague mentioned to him that the textiles department needed someone to teach a course in the history of fashion design. That soon turned into two courses and then Blanco learned that FSU had a historic costume collection that had been in storage for a decade.

When he arrived at UGA in 2006 Blanco found the FACS costume collection in much better shape. He also found a group of students eager to learn about historic clothing and how to develop museum-quality exhibitions.

“I really enjoy teaching,” Blanco said. “And, these students are so dedicated. The rule is that they care. They just do everything and they do it well.”

As a researcher, Blanco focuses on men’s fashion from the 1960s until the present. Currently, he’s studying how male musicians in Athens decide what they’re going to wear for their performances.

“When they’re performing, the band members in R.E.M. dress very much like they do every day, but the band members in Kiss have very distinct costumes,” he said. “I’m interested in finding out how band members decide what to wear. Do they make conscious decisions about it; are they trying to dress similarly to their audience or very differently, and what motivates them to wear particular outfits?”

The results will contribute to a developing area of literature focused on the role of dress and appearance in creating both personal and collective identity. Blanco hopes to continue to add to the historic costume collection and record the stories behind the donations.

“We have items from famous people like Mary Creswell, the college’s first dean, and a dress that was made for Rosalynn Carter, Jimmy Carter’s wife,” he said. “But we’re missing pieces from many famous male Georgians. I would like to build that part of our collection.”