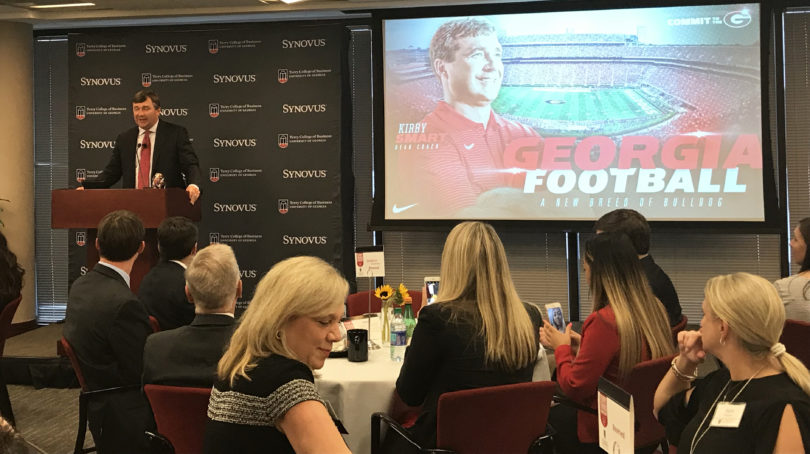 UGA head football coach Kirby Smart discusses the intersection of coaching and the business world at the May Terry Third Thursday event in Buckhead.

“A lot of the things we do with the football program relate to the business world,” said Smart, whose team went 13-2 last season on its way to winning the SEC Championship and the Rose Bowl Game.

Smart, a 1998 finance graduate from the Terry College of Business, said his staff borrowed a tactic from the business marketing playbook by using short, pithy slogans to communicate important themes to players throughout the season.

“We wanted really simple messaging because we want our guys to understand the points of emphasis — and you can’t have too many of them,” he said. “The first message was very simple: attack the day. When you walk into the weight room and you’re tired because maybe you studied until 1 a.m. the night before, you still have to come in and attack the day.

“It’s an aggressive approach to daily life. If I see a guy who’s down in the dumps, maybe he’s worried about an upcoming test or something, I’ll ask if he’s attacking the day or if he’s sitting back. If you’re not attacking the day, then you’re getting out-competed by another team. At Georgia, we can’t have that. We want to attack the day every day.”

“The second one is, keep the main thing the main thing,” Smart said. “Let me tell you how this came about. We won the SEC Championship. We beat Auburn. Then we have 23 days before we play in a playoff game. In what other sport do you go three weeks without playing a game before a playoff? It’s hard. And I am a nervous wreck.

“We’re getting ready to play Oklahoma. We have a lot of distractions with final exams coming up and signing deadlines, which is a distraction for our coaches. We have drafts and agents, which is a major concern when you’re a highly ranked team with good football players. There’s Christmas and travel to L.A. coming up and playing in a bowl game in a completely different environment for our players,” he said.

Consistent messaging has a powerful impact on a team, he said. It helps reinforce the hard truth that success — in sports or business — doesn’t come in many forms. It’s the result of persistent effort.

“One thing we talk about is the illusion of choice. It’s never been explained better than by having an apple in one hand and a bag of Doritos in the other,” Smart said. “You have this illusion that you can eat this bag of Doritos or the apple, but really there’s no choice if you want to be successful. There’s just one path. You’ve got to make the right decision.

“To be great and to be successful, you don’t have a choice. There’s the right way, the hard way. There are no short cuts. When the alarm goes off at 7:30 for that 8 o’clock class, people will say that you have a choice about getting up — but you don’t. If you want to be a good player, you have to get up and go to class. Successful people are willing to do something that other people are not.”

During the audience Q&A, Smart explained why he views UGA’s increasingly tough academic standards as a recruiting advantage for the football team.

“The rigors of the academic side of UGA have certainly changed and gotten much more difficult. It is tough to get into the University of Georgia. That should make us all proud. I know as a coach, it changes my evaluation of players, but I don’t use that as an excuse. I use it as an opportunity,” he said.

“We want an opportunity to recruit the best athletes because the guys who play the best are usually the ones who do well in the classroom. We want guys who are up for that challenge, who are going to walk into a classroom and be as competitive in there as they are on the football field,” he said. “And I think that makes our student-athletes much more prepared when they go out into the real world.”

Terry Third Thursday is a breakfast speaker series for the Atlanta business community that features influential speakers as well as special guests from the University of Georgia. It takes place at the Terry Executive Education Center in Atlanta.