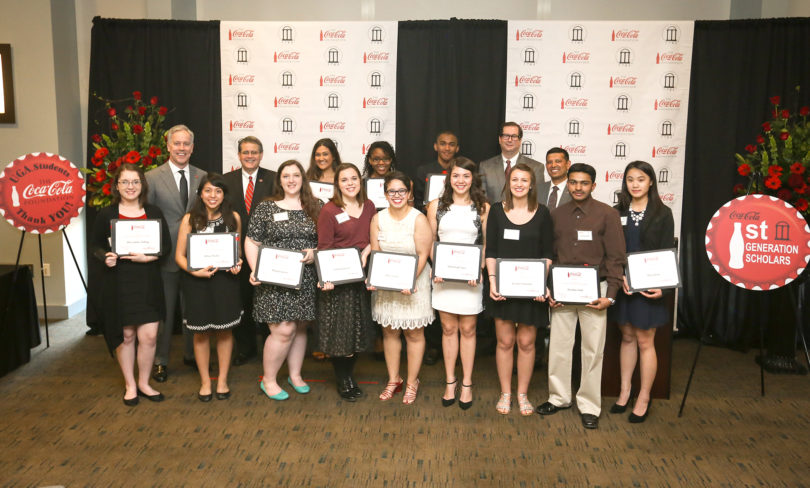 Twelve UGA freshmen were honored as Coca-Cola First Generation Scholars for the 2015-16 academic year at a dinner held on March 16 at the UGA Richard B. Russell Building Special Collections Libraries.

Athens, Ga. – Twelve University of Georgia freshmen were honored as Coca-Cola First Generation Scholars for the 2015-16 academic year at a dinner held on March 16 at the UGA Richard B. Russell Building Special Collections Libraries.

Rahul Shrivastav, vice president for instruction, welcomed scholars and guests to the event and introduced the speakers. Scott Williamson of The Coca-Cola Company was on hand to present the scholarship certificates with President Jere W. Morehead and Shrivastav. Morehead and Williamson, along with Coca-Cola First Generation Scholars Aileen Nicolas, a first-year geography major, and Shanteria Hines, a third-year marketing major, addressed the honorees.

The Coca-Cola First Generation Scholarship supports academically outstanding students who are the first in their families to attend college. The scholarship, which provides $5,000 per year in addition to the HOPE Scholarship, is renewable for an additional three years if the recipients maintain certain academic standards. Students also receive support and services through several unique academic programs to help them to adjust to college life, as well as opportunities for growth. The Coca-Cola Foundation has provided the scholarship to 126 UGA students since 2007. Last fall The Coca-Cola Foundation continued support for this program with an additional $1 million gift. For more information, see http://ovpi.uga.edu/coca-cola-firstgenscholars.