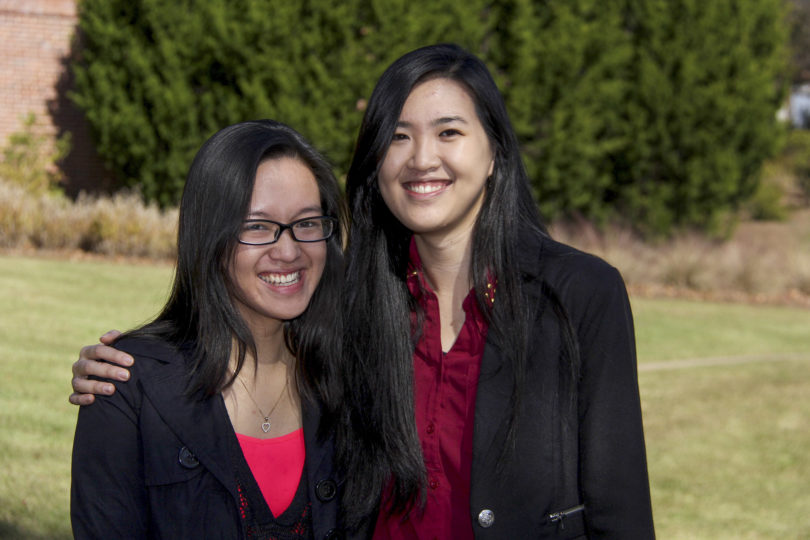 In addition to carrying the weight of backpacks, laptops and textbooks, many students come to college bearing the high expectations of their parents and family.

That’s especially true for Enid Truong and Diem Nguyen, two second-year UGA students from Duluth. Both students’ parents emigrated to the U.S. with dreams of sending their children to college—though they, the parents, were never able to earn college degrees.

Nguyen was born in Vietnam and came to the U.S. with her family. Truong’s parents escaped political turmoil in Cambodia and Vietnam before fleeing to the U.S., where she was born.

Both Truong and Nguyen—best friends since middle school and now roommates at Oglethorpe House—recall how hard their parents worked to be sure they could go to college.

“We try to work hard ourselves to not disappoint them,” Truong said.

While their parents are a shining example of hard work and sacrifice, Nguyen, a math education major in the College of Education, and Truong, a math major in the Franklin College of Arts and Sciences, did not have a family member who could tell them what to expect from college.

Instead, the two served as a support system for each other as they applied to college with little knowledge about what to expect.

Getting used to college can be tough for first-generation students, said Sylvia Hutchinson, a professor emerita of higher education and reading and a mentor in UGA’s Coca-Cola First Generation Scholarship Program.

Truong and Nguyen are both in the program, which supports academically outstanding students who demonstrate a financial need and are the first in their families to attend college. The scholarship provides $5,000 per year in addition to the HOPE Scholarship.

Coca-Cola First Generation Scholarship recipients are selected by the Office of Student Financial Aid and the Office of Undergraduate Admissions from accepted applicants to UGA.

Housed at UGA in the Office of the Vice President for Instruction, the program also connects the scholars with faculty mentors to answer questions and help guide them through their collegiate careers.

Hutchinson said first-generation students can feel like they are playing a game where everyone knows the rules but them.

“It’s intimidating for a student who has not been raised around higher education,” said Hutchinson, who mentors Nguyen and Truong.

Nguyen and Truong agree that their involvement in the Coca-Cola First Generation Scholarship Program has been invaluable, especially when they were adjusting to college during the first months of classes last year.

Now in their second year, the students are fully immersed in college life. Hutchinson said Truong and Nguyen are bright students and remarkably fearless in their desire to succeed at a large university.

The two chose UGA because of the size of the campus and the variety of learning opportunities.

“I wanted the kind of education where I could explore a lot of things,” Nguyen said.

Truong also has done some tutoring along with taking what she describes as a hefty course load this semester.

Busy as they are on campus, Nguyen and Truong are also thankful to just be a car ride away from their families.

While these students are reaching for higher educational achievements that their parents were not able to, they still embrace the people who made their achievements possible and visit home often.

“Home is very important to us,” Truong said.