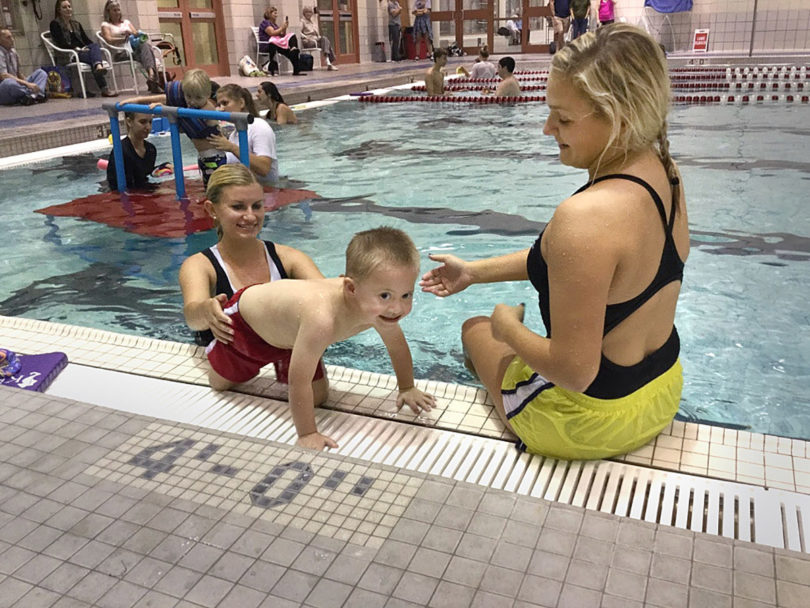 A line of pool noodles, beach balls and rubber chickens may seem like the perfect props for a pool party, but for students taking the adapted physical education class offered by the College of Education’s kinesiology department, they make up an essential component of a long-established program.

Every week, more than 20 children from around Athens-Clarke County meet at the Ramsey Student Center for a one-on-one clinical session with a UGA student. While the children all have different needs and impairments, the goal is always the same: to facilitate and assess their physical and motor development.

“I’ve always looked at the class as a clinical practicum for the students first,” said Michael Horvat, a professor in the department of kinesiology. “It gives them hands-on experience because who wants to sit through three lectures a week?”

Horvat, who is also the director of the Pediatric Exercise and Motor Development Clinic, has been designing and providing activity programs for children with disabilities for over three decades.

Since his arrival to the university, the clinic, which previously focused on game playing and recreational activities, has evolved into a vital source of firsthand knowledge for a large pool of students, including future physical therapists, physical education teachers and athletic trainers.

“This is one of the classes that the College of Education offers where students actually get hands-on practical experience,” said Ashley Fallaize, a doctoral student studying motor behavior. “For physical therapy majors, it’s invaluable because they have to get clinical observation hours and have an opportunity to interact with children who have special needs.”

The clinic offers students a rare opportunity to expose the children to new physical activities. Ranging in age from 2 to 14, each participant has a disability that hinders physical and motor development, such as cerebral palsy, autism, mitochondrial disorder, muscular dystrophy, spina bifida and more.

“The practicum is a time for students to take theory and put it into practice,” Horvat said. “But it’s also an opportunity for kids who aren’t traditionally active to participate in some type of exercise program. And that’s why a lot of those kids like to come back semester after semester.”

Generally, student programs involve half an hour in the gym and another half an hour in an aquatic setting. The latter sometimes poses a challenge to participants who are initially reluctant to get into the pool. It’s also the place where the most obvious progressions are seen.

For Laura Stevens, a senior majoring in exercise and sport science with a disability certificate from the Institute of Human Development and Disability in the College of Family and Consumer Sciences, the pool was where she remembers feeling the most excited about her student’s accomplishments.

Chase Jones, 5, has autism spectrum disorder, which is often characterized by low spatial awareness and a short attention span.

“I was super excited when I got Chase to float on his back,” Stevens said. “When he floats, he stops scripting. So with autism, a lot of times kids will talk extraneously, but he was very relaxed and focused on the task, which was a lot of fun for me to see. He’s just a joy.”

According to Fallaize, PEMDC is one of the few clinics that takes advantage of the pools at Ramsey. The students are not specifically teaching the children how to swim, but instead, use the water to develop physical and motor functioning. However, several children do end up learning some important survival techniques like floating on their backs, Stevens said.

“Our goal is to help the children as they try to keep up with their siblings in playing catch or when they go bowling and swimming with their family,” Fallaize said. “Every child has made progress, and they’ve all benefited. They stay consistent, and they come back each semester to work on different skills.”