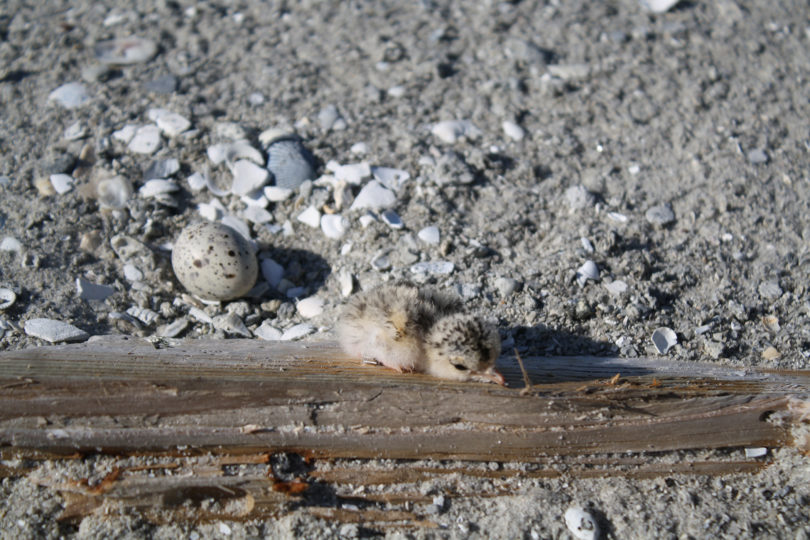 Aiken, S.C. – Researchers at the University of Georgia’s Savannah River Ecology Laboratory have found that a contaminated mixture called Aroclor 1268 has spread beyond a former chemical plant, now a Superfund site, near Brunswick.

SREL scientists and colleagues from UGA’s Warnell School of Forestry and Natural Resources and the College of Veterinary Medicine published their findings recently in the journal Environmental Science: Processes and Impacts.

Study co-author Gary Mills, a biogeochemist at SREL and adjunct associate professor in the department of geology, used advanced analytical tools to detect the individual chemical components of the contaminant in egg and tissue samples of least terns, a short-range migratory seabird. The samples were taken over a two-year period from six nesting populations at various sites along the Georgia coast.

This is the first study to investigate the presence of Aroclor 1268 in fish-eating birds, said the study’s senior investigator Sonia M. Hernandez, an associate professor in the Warnell School and the Southeastern Cooperative Wildlife Disease Study at the College of Veterinary Medicine.

Aroclor 1268 is composed of a suite of toxic chemical compounds known as polychlorinated biphenyls, or PCBs. The chemical was used to produce insulation materials at the Linden Chemical Plant at the Turtle Estuary near Brunswick until 1994.

“Because its only use in the Southeast was at the now-closed Linden Chemical Plant, we know this is the original source of the contaminant,” Mills said.

In 1996, the National Environmental Protection Agency placed the 550-acre site on the National Priorities List after finding PCBs, mercury and other contaminants. The area was later designated a Superfund site by the federal government—allowing for intensive cleanup.

Previous studies for Aroclor 1268 were all conducted at or very near the Superfund site.

The study sites ranged from 68 miles north of the Linden Chemical Plant to Savannah to 43 miles south near Kingsland and Cumberland Island.

Tissue samples taken from birds in these areas contained enough Aroclor 1268 to cause a number of adverse effects, including lower egg production, physical and physiological abnormalities in offspring and immune system disorders.

The findings indicate that the least tern ingests the contaminant when it forages on fish. Hernandez said because shore birds are at the top of the food chain, they are important indicators of the health of coastal environments.

Mills agrees, and said it is clear Aroclor 1268 has spread beyond the Superfund site via the food web because it is the most likely explanation for its presence in the species at the various sites. Because it is hydrophobic, or non-soluble in water, the contaminant naturally bonds to sediments.

“But sediment transport from tidal flow and coastal currents at these distances would significantly dilute the contaminant,” Mills said.

Supporting the findings are previous studies that document the presence of the chemical in reptiles, plants, fish, invertebrates and marine mammals.

Armed with this new information that Aroclor 1268 is spread through the food web beyond the site, researchers should be concerned about the potential transmission to predator and scavenger species and the population risk to the least tern, Hernandez said.

She also points to the lingering duration of its effects.

“Finding Aroclor 1268 in these bird tissues such a long time after its production ceased is evidence of the persistence of the contaminant,” she said.

The findings should also be an alert to researchers conducting studies at Cumberland Island and the surrounding area-reference sites for ecological studies, the researchers said.

The project was funded by the Morris Animal Foundation and supported by the Georgia Department of Natural Resources. The study is available at http://pubs.rsc.org.proxy-remote.galib.uga.edu/en/content/articlehtml/2015/em/c5em00183h. A map of the site, included with the study, is available at http://pubs.rsc.org/services/images/RSCpubs.ePlatform.Service.FreeContent.ImageService.svc/ImageService/Articleimage/2015/EM/c5em00183h/c5em00183h-f1_hi-res.gif.