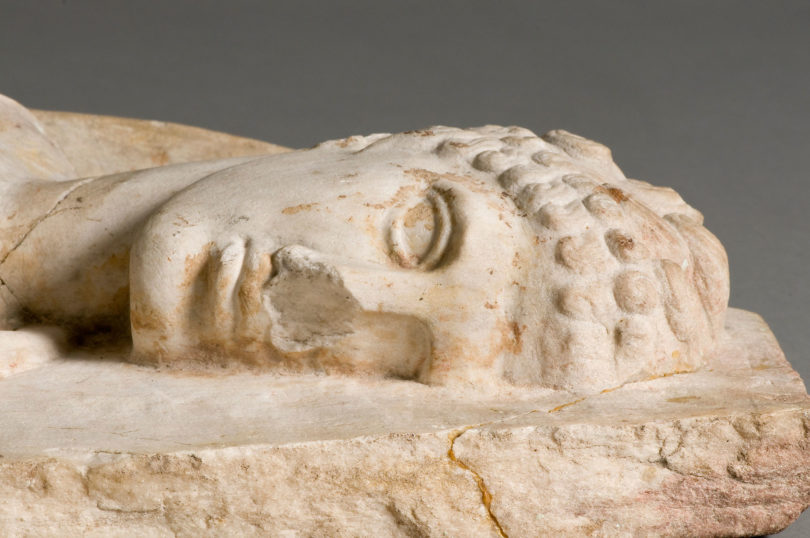 Athens, Ga. – The Georgia Museum of Art at the University of Georgia will host a public lecture and discussion on the findings of an interdisciplinary research project on an ancient Greek Orpheus Relief thought to date from classical Rome that is now believed to be a relatively modern replica. The event will be March 28 at 5:30 p.m.

The lecture will discuss “Object in Focus: The Orpheus Relief Project,” which has been on view at the Georgia Museum of Art since Sept. 30. The collaborative project included the public exhibition of and interdisciplinary study of the marble relief sculpture, which belongs to the David M. Robinson Memorial Collection of Greek and Roman Art at the University of Mississippi Museum. For the past two semesters, an interdisciplinary research project, conducted by GMOA, UGA’s Franklin College of Arts and Sciences and the University of Mississippi Museum, looked at the paint colors of the ancient sculpture.

The technical portion of the project focused on examining the materials of the relief, including the marble and remnants of pigment that remained on its surface. One major goal was to determine the original colors the relief had been painted by analyzing the chemical composition of the pigments through such tools as spectroscopy. The results of both traditional connoisseurship studies and scientific investigation, however, turned up strong evidence that both the paint and the carving date from approximately the 1880s through the 1920s.

The original composition, now lost, which dates to the High Classical Period of Greek sculpture (ca. 450-400 B.C.), inspired many replicas, both in Rome between the first century B.C. and the second century A.D. and closer to modern times. At the end of the 19th century, following Georg Treu’s organization of the first exhibition focusing on painted classical sculpture, a small number of such replicas were then painted. Abbe, Salguero and Speakman suspect that Mississippi’s relief dates to this latter era.

The relief has a documented historic provenance prior to the 1970 UNESCO Conventions. It was acquired by David M. Robinson, president of the Archaeological Institute of America, in Rome prior to 1948. The group’s working theory is that Robinson assumed that its weathering resulted from burial, but they believe it was instead displayed outside, producing outwardly similar effects. Abbe says it has no burial accretions (evidence of it having been underground) on its surface, which aroused the group’s suspicions.

Salguero and Speakman discovered evidence of modern industrial paints, such as titanium white, through their scientific analysis. The marble itself may be ancient and appears largely consistent with that mined from Mount Pentelikon in Greece, which served as the source for the Parthenon’s material, but Abbe says such marble was easy to come by even in the modern era. He points out that the breaks on the relief are relatively fresh and much less weathered than its surface, indicating that it was broken more recently. Abbe also says there are aesthetic reasons he thinks the relief is a modern reproduction. Its carving is flattened, unlike other, earlier versions of the same relief, which could indicate its carver was working from a much later plaster cast in which detail and depth had been lost through repeated duplication.

“This project is a perfect example of how the museum serves as a hub for interdisciplinary research and teaching, almost every step of which has been conducted in public view,” said Lynn Boland, the museum’s Pierre Daura Curator of European Art.

Museum Information
Partial support for the exhibitions and programs at the Georgia Museum of Art is provided by the Georgia Council for the Arts through appropriations of the Georgia General Assembly. The council is a partner agency of the National Endowment for the Arts. Individuals, foundations and corporations provide additional museum support through their gifts to the University of Georgia Foundation. The Georgia Museum of Art is located in the Performing and Visual Arts Complex on the East Campus of the University of Georgia. The address is 90 Carlton St., University of Georgia, Athens, Ga. 30602-6719. For more information, including hours, see http://www.georgiamuseum.org or call 706/542-GMOA (4662).