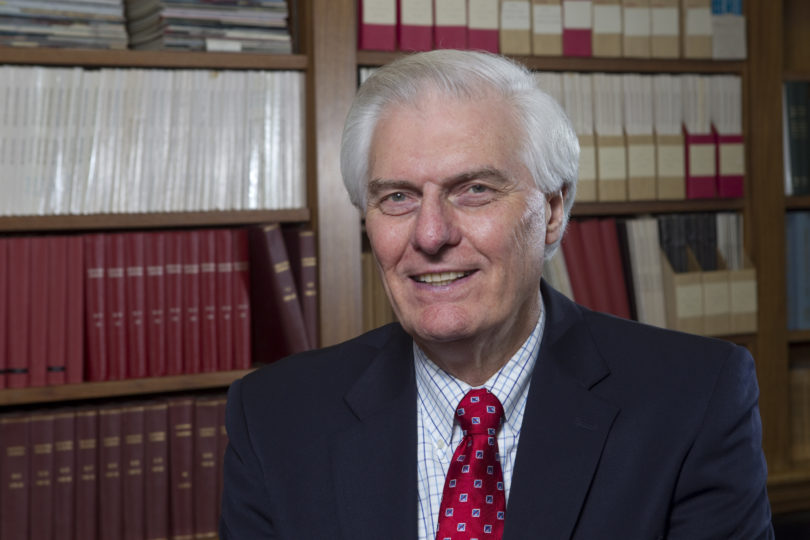 Dale Threadgill, founding dean of UGA's College of Engineering, is a recipient of the Lifetime Impact Award in Engineering.

The University of Georgia College of Engineering celebrated individuals that have demonstrated a sustained commitment to the discipline of engineering at the university during its Engineering 150 Gala on Nov. 3.

“As we celebrate the 150th anniversary of the first class of engineering graduates at the University of Georgia, we want to take time to recognize and honor the contributions of those who have made a significant impact on the long legacy of engineering at UGA and on our growing engineering college,” said Donald Leo, dean of the College of Engineering. “These award recipients helped establish a strong foundation for the college and their contributions will make a difference for generations to come.”

The Lifetime Impact Award in Engineering is presented to individuals that have achieved significant professional distinction in the field of engineering, have a lifetime of service to the discipline, and have supported the college through their philanthropic contributions. The 2018 recipients are Dale Threadgill, J. Barnie Beasley and Mickey Brown.

Beasley is a member of the board of directors of American Electric Power, one of the largest electric utilities in the United States. A 1973 graduate of the University of Georgia with a bachelor’s degree in agricultural engineering, Beasley retired in 2008 as chairman, president and chief executive officer of Southern Nuclear Operating Co. A longtime member of the UGA College of Engineering Advisory Board, he established the Barnie & Carla Beasley Endowed Scholarship for Engineering Excellence.

Brown, a former executive vice president with Georgia Power Co., was responsible for the construction, design and maintenance of an electrical system serving millions of customers across the state. He earned a bachelor’s degree in agricultural engineering from UGA 1969 and has been a longtime supporter of the university and its efforts to establish a comprehensive engineering college. The Georgia Power Mickey A. Brown Professorship supports vital instruction and research at the university and the Mickey and Carolyn F. Brown Georgia Commitment Scholarship provides needs-based support for engineering students.

Jonathan Jones will receive the Early Career Impact Award. The award recognizes individuals who have achieved significant distinction early in their career while generously serving the college with their time and giving. A 2013 graduate of UGA with a degree in biochemical engineering, Jones is a fermentation improvement engineer with Corteva Agriscience. In addition to serving on the College of Engineering’s Advisory Board, he has devoted his time to mentoring UGA engineering students and has worked to ensure the college is included in Corteva Agriscience’s recruiting program. Jones received the 2018 Eugene M. DeLoatch Legacy Award at the annual Black Engineer of the Year Awards Global Competitive Conference in recognition of his work to establish a company-sponsored STEM outreach program for students, teachers and parents in rural Michigan. In addition, Jones is a member of the UGA Alumni Association’s 40 Under 40 Class of 2018. This program celebrates the personal, professional and philanthropic achievements of UGA graduates who are under the age of 40.

The Engineering Impact Awards will be presented Nov. 3 at the Engineering 150 Gala at the Classic Center in Athens. The event is a celebration of 150 years of engineering education at UGA.

More information about the gala is available online.