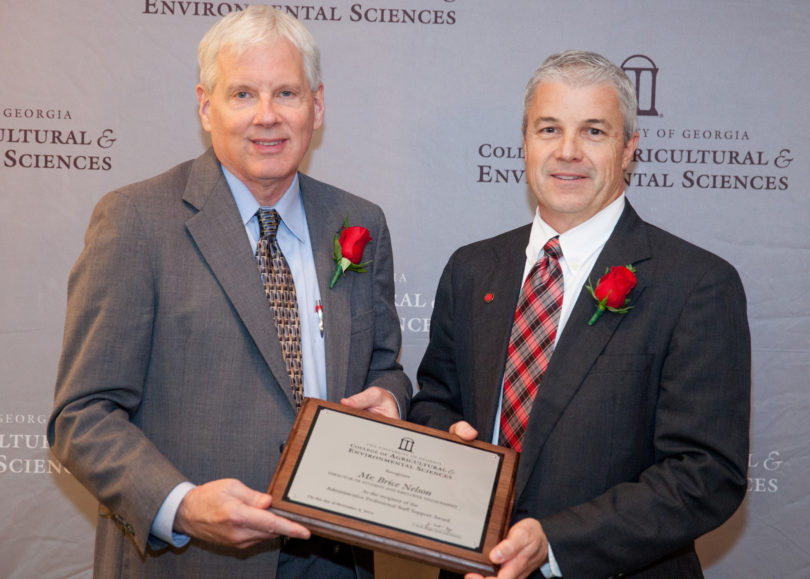 Athens, Ga. – The University of Georgia College of Agricultural and Environmental Sciences recognized 12 of its finest this week at the D.W. Brooks Awards for Excellence and the CAES Faculty and Staff Awards.

The D.W. Brooks Awards and Lecture Series was launched more than 30 years ago in honor of Brooks, an alumnus and former college faculty member who devoted his career to the improvement of life through improvements in agriculture.

As the founder and chairman emeritus of Gold Kist Inc., Brooks advised seven U.S. presidents on various agriculture and trade issues. He helped to create the integrated poultry production system that transformed Georgia agriculture during the 20th century, and also started Cotton States Mutual Insurance Companies in 1941 to provide farmers with insurance. Brooks, who started teaching agronomy at UGA in his teens and taught his last class in his 90s, also holds UGA’s record for being both its youngest and its oldest faculty members.

The winners of the D.W. Brooks Awards of Excellence are “a great testament to him, to the commitment this college continues to have to our land-grant mission and to the legacy of success for our students, our state and agriculture worldwide,” said Dean J. Scott Angle at the awards ceremony.

He encouraged the students, faculty and staff gathered to view their work in agricultural as having an impact not just in Georgia but also on the world stage.

This year’s winners are listed below.

Terence Centner, a professor in the department of agricultural and applied economics, won the D.W. Brooks Faculty Award for Excellence in Teaching. The award recognizes his work developing the college’s pre-law and environmental law programs and innovative instruction in the classroom.

Dennis Hancock, an associate professor in the department of crop and soil sciences, won the D.W. Brooks Faculty Award for Excellence in Extension. The award recognizes his work as the state’s forage specialist and in promoting sustainable and profitable grazing strategies to farmers across the U.S.

Ignacy Misztal, a professor in the department of animal and dairy science, won the D.W. Brooks Faculty Award for Excellence in Global Programs. The award recognizes his worldwide reputation as an expert on genetic analysis and animal breeding and the number of international scholars who have come to UGA to study with him.

Brice Nelson, the college’s director of student and employer engagement, won the CAES Staff Award for Administrative or Professional Support. Nelson has led the college’s student recruitment efforts for the past decade and has helped to nearly double the college’s enrollment.

Jay Bauer, a senior graphic designer in the Office of Communication and Creative Services, won the CAES Staff Award for Technical Support. Bauer created the college’s mascot Caesar when he first started at the college almost 14 years ago. Most recently he created a museum exhibit to celebrate the centennial of UGA Extension.

C.J. O’Mara and Brooke Powell, agricultural specialists with the J. Phil Campbell Sr. Research and Education Center, won the CAES Award for Skilled Trades Support. O’Mara and Powell managed the on-the-ground transition of the 1,055-acre research farm as is it changed hands from USDA to UGA’s ownership.

Cesar Escalante, an assistant professor in the department of agricultural and applied economics, won the D.W. Brooks Diversity Award for Faculty. The award recognizes his work supporting graduate students from diverse background and his research into discriminatory lending practices and immigration policy.

Brittnee Thirkield, who is pursuing her doctorate in the department of food science and technology, won the D.W. Brooks Diversity Award for Students. The award recognizes her role as a mentor to younger students both through formal and informal interactions.