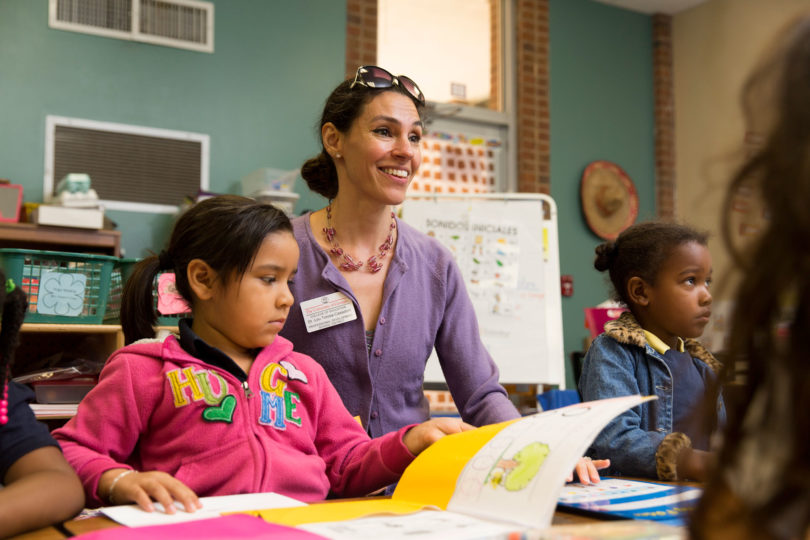 UGA senior Summer Willingham smiled at the wiggling kindergarteners as she pointed to a picture on the classroom computer screen.

The lesson that day was about the sense of taste, and the children had several samples on paper plates in front of them: Something dulce, something salado and something amargo—an M&M, a pretzel and a piece of bitter chocolate. Now it was time to sample something agrio—a lemon slice.

This lesson for the children at Oglethorpe Avenue Elementary School in Athens did more than give them a tour of their taste buds. Taught by Willingham and fellow senior Matthew Christmas, both students in the College of Education’s World Languages program, the lesson contributed to the school’s new dual-language immersion program.

Once a week, Willingham and Christmas create an original lesson for the kindergarten class, one of three classes in the school taught 80 percent in Spanish and 20 percent in English.

“Last year we were taking upper-level Spanish classes but no education classes. So this year so far has been a big transition” said Willingham.

“I love learning and teaching languages. I also have a passion for education and working with kids. This program is exactly what I was looking for because it combines both. I’m so excited about what we’ve been doing so far and what’s coming up.”

The kindergarten class is the practicum portion of “Methods for Elementary School (K-8),” a class taught on-site at Oglethorpe Avenue Elementary. Lou Tolosa-Casadont, a clinical associate professor in the college’s language and literacy education department, said the class has undergraduate and graduate students at Oglethorpe Avenue Elementary School teaching in Spanish as well as Latin, French, German and Chinese and ESOL (English speakers of other languages) classes. In addition to teaching Spanish in the dual-language immersion and English-only kindergarten classes this fall, she said other UGA students are placed around the school.

“We are offering Latin to third-graders, Chinese to two first-grade classrooms, French and German to fourth- and fifth-grade Spectrum students and ESOL to fifth-graders,” said Tolosa-Casadont.

The first few weeks of the semester are spent laying the groundwork—learning educational theory and how students in that age range learn, ­observing and getting to know the children with whom the teacher candidates will work. It’s a big learning curve for students, some of whom have never taught their own class before. The experience of teaching in a dual-language environment is also new to many students.

“For many of them, it’s the very first time they find out that dual language exists,” said Tolosa-Casadont, who is also the professor-in-residence at Oglethorpe and supports the new dual-language program, which launched in one prekindergarten class and two kindergarten classes. Next year it expands into two first-grade classes, she said, with the goal of retaining enough children each year to add two classrooms every year going forward.

Each day, 80 percent of the lessons are in Spanish and 20 percent are in English, she said, with the goal of increasing dual language literacy among all students, no matter their native language.

Christmas is gaining confidence in his Spanish and also knows some Turkish; being able to teach in Spanish helps.

“I’m definitely interested in language—I have been for a long time,” he said. “But mostly just through working at camps for kids and being in classroom situations and coaching, I just knew that I would be, at some point, in a school.”