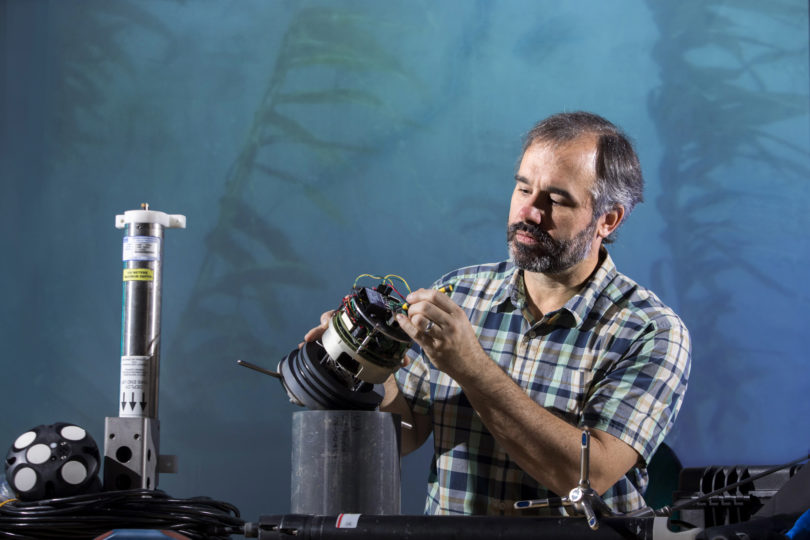 For Brock Woodson’s work to impact learning and retention rates by incorporating “flipped classroom” practices into his teaching, he shared a 2015 UGA Creative Teaching Award with Siddharth Savadatti, a lecturer in the College of Engineering. Woodson’s “flipped classroom” model is now used by all instructors who teach fluid mechanics in the college. (Photo by Dorothy Kozlowski) 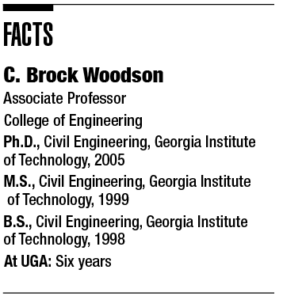 A conversation with engineering professor Brock Woodson can lead in some unexpected directions, including discussions about Spanish explorers and ancient Roman art. While these topics seemingly have little in common with engineering, they illustrate the way Woodson’s research cuts across academic disciplines.

“My work is inherently interdisciplinary,” said Woodson, an associate professor in the School of Environmental, Civil, Agricultural and Mechanical Engineering. “I rarely work with just engineers. I work with social scientists and ecologists and oceanographers and population dynamics scientists, even members of fishing communities.”

In 2018, Woodson and his colleagues published a study in Nature Communications that offered a new approach to exploring and predicting the structure of ocean ecosystems.

“Just coming into problems like those with an engineering background you have a very different perspective of how things might work and how systems fit together,” he said. “At the same time, to understand some of these systems, I work on a range of projects from instrumentation development to numerical model development to try to understand some of these complex interactions.”

Woodson traces his love of the outdoors and the ocean to summers spent on Alabama’s Dauphin Island, where his aunt and uncle owned a beach house. Although he considered studying marine ecology in college, a penchant for math and science led him to Georgia Tech where he earned bachelor’s and master’s degrees in civil engineering.

“Then, I spent the next 10 years trying to figure out how to make engineering do what I wanted it to do,” Woodson joked.

After working for a few years as a design engineer for an architectural fountain firm (working at times with Maya Lin, the designer of the Vietnam War Memorial), he returned to Georgia Tech to purse his doctorate. It was there his drive to conduct ocean research connected with his engineering expertise, and he was able to apply the science of fluid dynamics to ocean and fisheries questions.

Following postdoctoral work at the University of Hawaii and time at Stanford University as a research engineer, Woodson joined the newly formed College of Engineering at UGA in January 2013.

Woodson brings a similar forward-thinking approach to his teaching in the College of Engineering. He revamped the college’s fluid mechanics course by introducing a “flipped classroom” model that also allows him to connect his research to his teaching.

“I get a lot more interaction with students,” he said. “I could almost—almost—teach a flipped classroom without giving exams because I know who understands the material and who is putting forth effort just by walking around the class and listening to students work through the material together. It’s pretty phenomenal.”