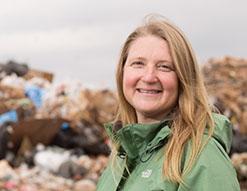 Jenna Jambeck, an associate professor in UGA’s College of Engineering, was quoted in USA Today about the Great Pacific Garbage Patch.

Almost all of the trash in the Great Pacific Garbage Patch comes from countries around the Pacific Rim. The Ocean Cleanup Project is sending out a giant floating trash collector to try and scoop it up, and the first of its cleanup systems launched Sept. 8 near San Francisco. The patch includes about 1.8 trillion pieces of trash and weighs 88,000 tons. According to a 2015 study, the top six countries ocean garbage were from were China, Indonesia, the Philippines, Vietnam, Sri Lanka and Thailand, with the U.S. contributing 242 million pounds of plastic trash to the ocean per year. China recently banned the import of most plastic waste, and nearly 4,000 shipping containers full of plastic recyclables had been shipped to Chinese recycling plants from the U.S.

“It’s hard to predict what will happen to the plastic waste that was once destined for Chinese processing facilities,” said Jambeck, who conducts research and teaches environmental engineering with a focus on solid waste. “Some of it could be diverted to other countries, but most of them lack the infrastructure to manage their own waste let alone the waste produced by the rest of the world. Most plastics don’t biodegrade in any meaningful sense, so the plastic waste humans have generated could be with us for hundreds or even thousands of years.”