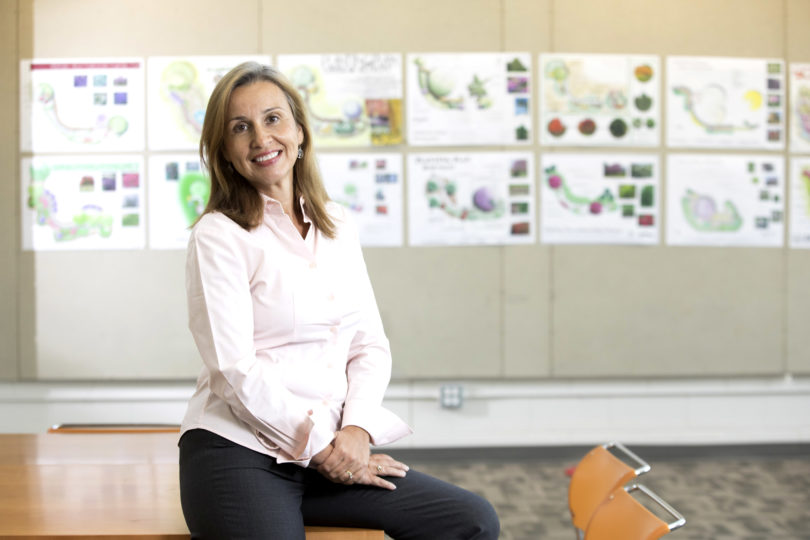 Sonia Hirt became the dean of the College of Environment and Design on July 1. (Photo by Dorothy Kozlowski)

What makes cities so different from each other?

“This is the fascinating question that has always driven me,” said Sonia Hirt, who became dean of the College of Environment and Design on July 1. “Is it economics that drives these differences? Or social factors? Or demographics? Or cultural factors? Of course, the answer is all of the above. I’m trying to shed light on one factor as compared to others. It’s a process of never-ending exploration.”

As an undergraduate, she was initially interested in architecture. In fact, that was her area of study for her bachelor’s degree from the University of Architecture, Civil Engineering and Geodesy in Sofia, Bulgaria. But in 1993, she won a competition that brought her to the U.S. for a six-month internship in the Midwest. That internship led to a change in focus.

“The internship triggered my interest in how urban areas grow,” she said. “Being a person who thought individual buildings were my future, I began to see myself as a someone who would be interested in the relationship between spaces, buildings and the spaces between buildings.”

Then, it was simply chance, she said. Hirt meet some professors in urban planning from the University of Michigan and went on to get a master’s degree and doctorate in urban and regional planning from that school. In between those degrees, she worked for a firm that does land-use planning and consulting.

The design of cities and landscapes is crucially important, Hirt said, because “it may be obvious, but nonetheless worth emphasizing, that we all function in spaces—buildings, settlements and other areas that someone has designed. Almost all social interactions occur in human-made, designed space, whether in urban areas or suburbs or towns. What these settlements have in common is that they all reflect the physical, social and cultural patterns of those who made them and who inhabit them.

It’s an area Hirt continues to study, writing more than 75 scholarly publications, including three books. She says she writes to satisfy her own curiosity.

“Settlements at any level—cities or towns—are potentially the most complicated artistic product that people make because no other physical product is so collective and so complicated to understand,” she said.

When students graduate from a College of Environment and Design program, Hirt wants them to be ready to imagine spaces and implement them. Hirt added that they also should come out of the programs with confidence because they are the makers of spaces where people live, work and play. Furthermore, the designs they create have enormous impact on the environment and on the well-being of the whole planet.

First on Hirt’s plate of short-term projects is the College of Environment and Design’s 50th anniversary, which she is using as “a window of opportunity to set the path for the future.” The celebrations will continue throughout the 2019-20 academic year with a diverse range of symposia, lectures, special displays and more.

In the long term, Hirt said that she’s interested in a variety of cross-disciplinary collaborations. One of those might be with public health programs to look at how land use can have a positive impact on health, such as making areas more walkable to encourage exercise. She also pointed out strong ties between design and business—specifically in real estate development.

“It’s important to respect tradition in design but still move forward,” she said.