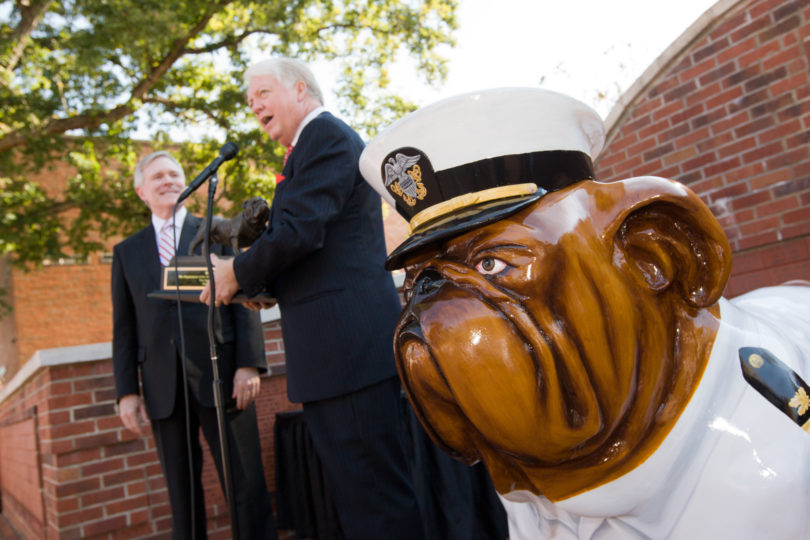 As part of the transfer ceremony

In 1953, UGA ceded the grounds where it held its Normal School for teachers to the U.S. Navy. Last month, the Navy ceremoniously returned the favor, signing over its Supply Corps School on Prince Avenue back to the university for its health sciences campus.

“We come together on this property to work with our colleagues at MCG on meeting Georgia’s pressing need for more physicians,” said UGA President Michael F. Adams. “We are answering a call. We are improving the quality of life. We are creating a legacy of service and care that will last for decades.”

Beginning with a presentation of flags by Naval officers in white uniforms and ending with a musical tribute from the UGA Wind Ensemble, the ceremony itself was a joint effort between institutions.

Also on hand was Gov. Sonny Perdue, who drew parallels between the services that military and educational institutions provide for citizens.

“We understood the storied history that this campus had played in the training of our military servants throughout the last 57 years, but we could not have imagined a better ongoing purpose for this beautiful campus,” Perdue said. “We will continue to educate men and women for service to their country and to our state in the best sense of the U.S. Navy and the state of Georgia.”

Secretary Mabus said the Navy had put down “deep roots” in Athens.

“I do take solace in the fact that though the uniforms of my shipmates will disappear, eager faces and eager students will still walk on this campus,” he said. “The health science students who inherit this site will learn to take care of people in a way that’s similar to the way the supply corps students have learned here for more than 50 years.”

The Navy graduated its final class at the Athens campus on Oct. 29. Next year, the Supply Corps School will move to Rhode Island.