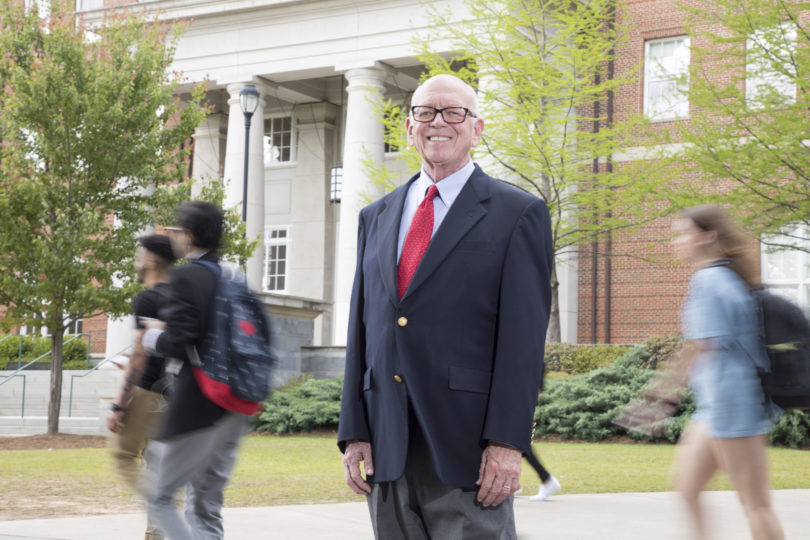 Olyn Gee will get his political science degree at Commencement and plans to continue his education. (Photo by Peter Frey/UGA)

At age 70, Olyn Gee will graduate with honors — and he’s ready for more.

Olyn Gee knew he had to find better things to do.

He worked as a wedding photographer for 13 years, but when he retired, most nights ended on the sofa watching mindless television with his wife.

“That’s just a slow death,” Gee said. “There’s only about half an hour of good TV on every night, another half hour if you add in Netflix.”

So, the then-62-year-old decided it was time to go back to college.

It had been awhile since Gee was last in a college classroom. He’d gotten a degree in business from Lander University in South Carolina, but education wasn’t really his highest priority at the time. This time his end goal was different: Gee just wanted to learn.

“I started going just to have fun,” he said. “The thing students in school now don’t understand is that these are the happiest years of your life. You spend your whole life trying to get back to college.”

Gee’s tuition was paid for by the state’s senior citizen assistance program, so he could take all the classes he wanted without committing to a major or worrying about finances. But after a few years, Gee found out he had enough credits to qualify as a junior, inspiring him to set a new goal: a bachelor’s degree from the University of Georgia.

“Obviously, I’m different from the typical Georgia student. I’m 70 years old,” Gee said. He expected to be somewhat isolated from his classmates, if only because of the age difference; instead, he found incredibly accepting and friendly peers.

During the seven and a half years Gee has been taking classes at UGA, he’s befriended countless UGA undergraduates and watched many of them move on to fulfilling careers post-graduation, many of whom he keeps up with today.

As for his immediate future, Gee will be walking across the stage at Sanford Stadium on May 4 with his fellow Class of 2018 graduates. Although he’ll have a political science degree from the School of Public and International Affairs in hand, Gee isn’t ready to quit learning.

“I’ve gotten really interested in the things that Grady College teaches,” he said. “A lot of the cool kids I know go to Grady. I’m going to apply and see if I can get in. Maybe I could set a record for most undergraduate degrees.”