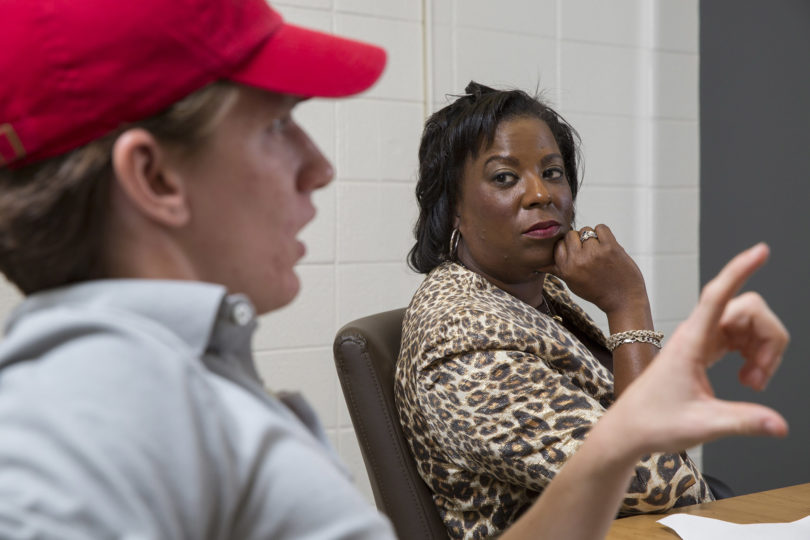 Many students enter UGA with limited notions about the world as it exists beyond their own experience. Serious discussions about bias, privilege, race and class require great skill and grace in any setting. For communication studies professor Tina M. Harris, the classroom provides both a refuge and forum to help students gain an understanding about who they are and how they engage with the world around them.

“We talk about power, how power is constructed and how there are certain groups that benefit more so than others, not to make any students feel guilty but to be proud because that’s who you are, so don’t minimize that,” Harris said. “We need to recognize and discuss the fact that there are groups who have been historically marginalized, and they do not have access to opportunities and resources that the majority group does. And this is not just an issue in the U.S., but around the world.”

For Harris, the tension of those unsettling and sometimes uncomfortable early discussions is balanced by the openness and liberation of learning on the part of her students she also gets to experience.

“I’m blessed to be a part of that awakening in so many of them,” she said. “Often they thank me, but in so many ways, I am at least as fortunate as they are.”

That ability to empathize with her students and share in their experience as they begin to develop their consciousness about the world plays a significant role in interracial and interpersonal communications. Harris brings the same level of engagement to the coursework in the study-abroad program she teaches in Costa Rica.

“In many ways, they have the same racial hierarchy that exists in the U.S. that prioritizes lighter skin and stereotypes people of Afro-Caribbean or Nicaraguan descent,” she said.

A service-learning project, course readings, ongoing class discussions and informal interactions among the students help them to think about their privilege as Americans coming to Costa Rica.

“The program has evolved in a way that has made for the perfect experience,” Harris said. “We start off at the UGA campus in San Luis, letting the students take a moment and breathe, enjoy life and appreciate nature.”

Students are slowly introduced into the culture for six days before leaving for the city of San Jose.

“By the time we engage with the service project working with schools in Puerto Viejo, students have become more mindful of the racial differences in the country as well as the economic privileges they enjoy as Americans,” Harris said. “It’s a healthy experience learning about ethnocentrism, how to make sure it doesn’t get in your way as you genuinely engage in helping people. It’s often a life-changing few weeks.”

A daughter of the South, Harris spent four years living in Spain while her father served in the military.

“I’m so glad that we did,” Harris said. “My mom jokes to this day that Spanish was my first language.”

That ability comes in handy in Costa Rica, though Harris admits that she, too, is still learning when it comes to her second language.

“I can speak extensively about the educational system there, but I still might forget the word for fork,” she said.

A Double Dawg in communication studies, Harris earned her doctorate at the University of Kentucky and taught at Bowling Green State University before returning to join UGA as faculty in 1998.