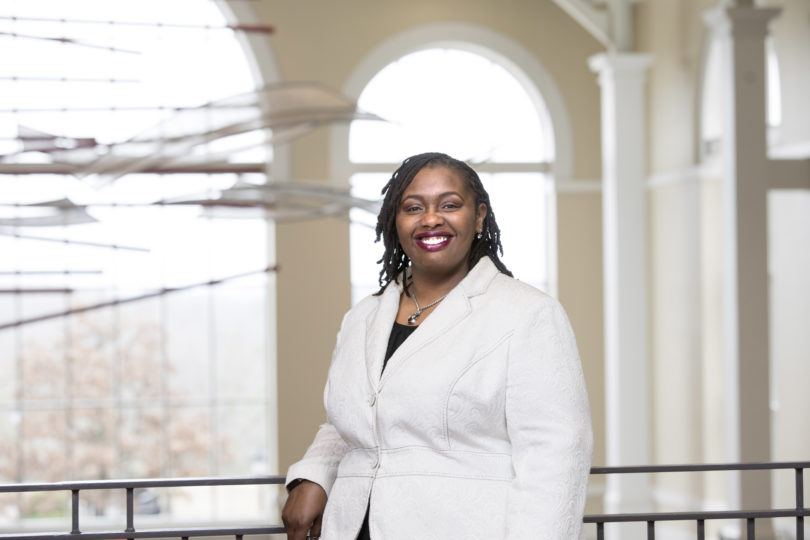 Michele Pearson was recognized as the community recipient of the 2019 Dream Award for her dedication to giving back to the Athens community. (Photo by Dorothy Kozlowski)

Growing up on the east side of Athens, Michele Pearson was always a “why” kid.

“Why is the grass green and the sky blue? Why do we do this?” she remembers asking. “I don’t do well with a ‘because I said so’ response.”

While her unwillingness to follow the rules just because they were the rules drove her family crazy; that tendency to not accept the status quo and to argue for change is what won Pearson recognition at the 16th annual Martin Luther King Jr. Freedom Breakfast. The business owner and longtime Athens Housing Authority and Athens Area Chamber of Commerce board member was awarded the President’s Fulfilling the Dream Award, given to an outstanding member of the Athens-Clarke County community who is advancing King’s dream of equality and justice for all, on Jan. 18.

Pearson’s dedication to giving back started in high school when she served on Cedar Shoals High School’s student government association. From that point on, getting involved in her community became innate.

“Being an Athenian, I would think what did I see? What did I complain about?” she said. “I am one of the strong believers in ‘you don’t complain; you do.’ So, being an engaged citizen was just like breathing.”

When she graduated with bachelor’s degrees in history and business from Piedmont College in 2003, Pearson didn’t know what she wanted to do next. She’d planned on law school, but an internship showed her that law wasn’t quite the right fit. But she’d worked in Piedmont College’s school of business while attending, and when a dean suggested getting an MBA, Pearson knew it would be the right fit.

After getting an MBA in management in 2005, she got to work.

She knew that one of the best ways she could effect change in her community was to help people learn more about finance, which ultimately led to her becoming a financial adviser and opening her own Edward Jones investment firm in Athens.

“I did not grow up with money at all,” Pearson said. “But it became the thing that I saw moving the needle. No matter what socioeconomic level you were, if you were able to understand financial freedom, then you could actually take charge and do things. When people have that empowerment, they can actually do what they want.”

That focus on helping people make the most of their circumstances brought Pearson, who was then serving as a representative for the Athens Housing Authority, to a community meeting in 2016 where people from a variety of local organizations were gathered, trying to determine what the future held for Athens.

“I said, ‘There’s no way we’re going to work.’ If we’re going to start down this road of planning what Athens looks like in the future, the board needs to look like the community,” she said. “Everybody kind of looked around and said, ‘I hadn’t noticed.’ And I was like, ‘That’s because you never have to.’ ”

Out of that discussion came the idea for a new organization, one that would help take control of the future of Athens to fix problems that exist and maximize the city’s potential: Envision Athens.

The housing authority and Envision, where Pearson now serves as chair, served as a springboard for her, launching her into more organizations and onto more boards, like Ebenezer Baptist Church, West Trustees, where she serves as secretary.

She became a member of the Winterville Local School Governance Team, which focuses on school improvement and planning; worked on the Mayor’s Task Force on ACC Diversity, Equity and Inclusion; served as the regional coordinator for the Edward Jones Alzheimer’s Awareness program; co-founded the Northeast Georgia Business Alliance; and has continued as a member of the Athens Housing Authority board since 2006.

Despite her community involvement record, she remains humble.

“My first thought when I found out I won the Fulfilling the Dream Award was am I old enough to get this award?” she said with a laugh. “What have I done to deserve this award? I still don’t see it.”

Because for her, being involved in her community is second nature. It’s just what you do.