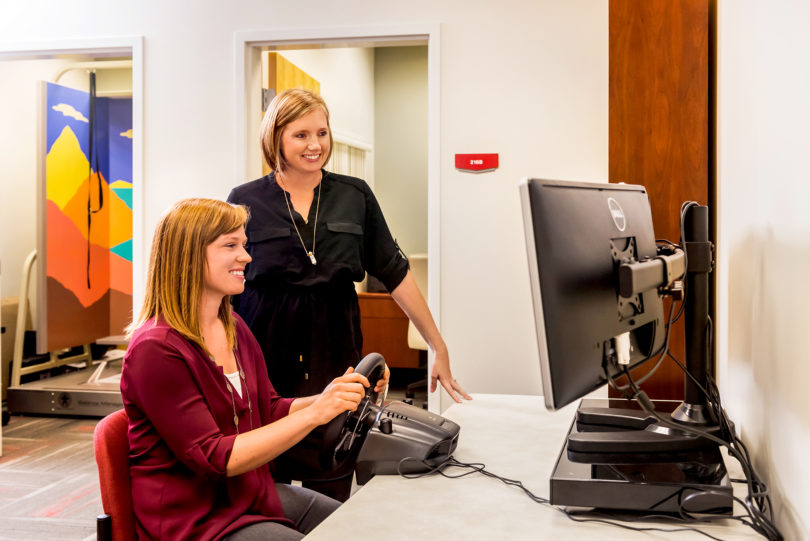 The effects a concussion has on driving a vehicle may continue to linger even after the symptoms disappear, according to a new study by UGA researchers.

Julianne Schmidt, associate professor in the UGA College of Education’s kinesiology department and lead author of the study, said even though participants felt like they had recovered from their concussion, they were still likely to drive erratically while using a driving simulator-at times similar to someone driving under the influence of alcohol.

“They had less vehicle control while they were doing the driving simulation, and they swerved more within the lane,” Schmidt said. “This is a pretty large indicator of motor vehicle accident risk, and this is at a time point when they are considered recovered.”

The study, recently published by the Journal of Neurotrauma, included 14 college-age participants, all of whom were within 48 hours of no longer feeling the effects of their concussion. It is the first study of its kind to look into how a concussion impacts a person’s ability to drive.

Typically, concussion research has focused on how the injury affects athletes, Schmidt said. Before injured players can return to the field, they must pass a series of tests to determine how well their brain is functioning, even after concussion symptoms disappear. Before this study, the issue of driving after a concussion has never come up—even among athletes.

“In athletics, we don’t restrict their driving before their symptoms resolve. Often, people will get a concussion and drive home from the event or practice that caused the concussion—there are no restrictions there,” said Schmidt. “Whereas, we would never let them go out on the field or court; we’re very strict about that.”

But because the study showed that the effects of a concussion lasted longer than its symptoms, Schmidt said the research has implications beyond athletes.

“The driving simulation shows they are performing very differently on the road compared to people who are not concussed, even after such symptoms resolve,” she said. “We have very fine-tuned recommendations for when a concussed individual is ready to return to sport and the classroom, but we don’t even mention driving in our recommendations. And only 50 percent of people intend to restrict their driving at any point following a concussion, which means that by the time they are feeling better, they are almost certainly on the road.”

The study was funded by a grant from the UGA Office of Research, and researchers from Augusta University and the University of Kansas Medical Center collaborated on the project.