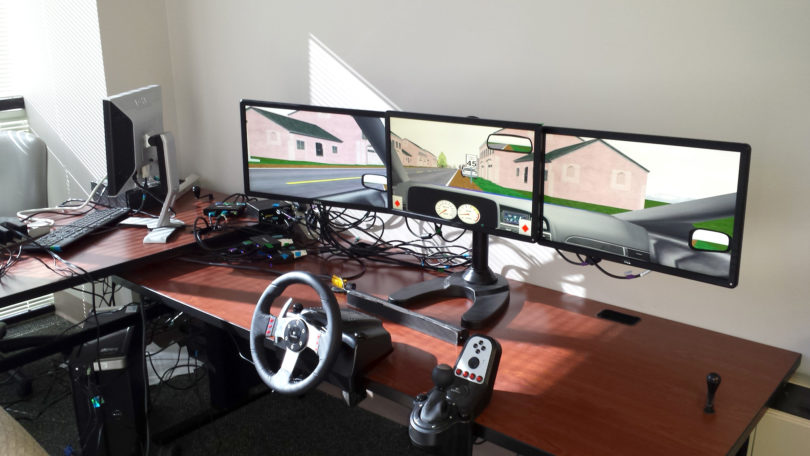 Researchers are conducting the first-ever study of the effect concussions have on driving a vehicle.

Athens, Ga. – A concussion can keep an athlete out of a game. But should the same type of injury also keep someone from getting behind the wheel? Now, a pioneering study by a University of Georgia researcher aims to find out.

Using a grant from the UGA Office of the Vice President for Research, Julianne Schmidt, an assistant professor in the College of Education’s department of kinesiology, recently began the first-ever study of the effect concussions have on driving a vehicle. By partnering with Hannes Devos, an assistant professor at Georgia Regents University and assistant director of the school’s Driving Simulation Lab, the team has created a driving test and a set of cognitive tests to evaluate patients at different points in their recovery following a concussion.

“We have good recommendations for when to go back to sport, but very little on when to go back to driving,” said Schmidt, who also works with Ron Courson, the Athletic Associatio’s senior associate athletic director for sports medicine, to evaluate head impacts among UGA football players. “We see a lot of the same neuropsychological effects that lead us to believe people are impaired in ways that would affect their driving following a concussion, but nobody has ever studied it.”

She added that fewer than half of patients with a concussion plan to change their driving habits after their injury. Yet often, concussion symptoms affect skills required to drive, such as response time and cognition.

Schmidt and Devos began data collection this fall with recreational athletes and members of the community. With a steering wheel and pedals hooked up to three wide-screen computer monitors, the patients used the driving simulator to navigate streets, pass cars on highways and react to common driving situations, like stopping at a red light or swerving to miss a child running into the street. The team will conduct another round of tests in the spring.

“So based on their driving ability and cognitive tests, we will be evaluating their skills related to driving,” said Devos. He noted that while it’s important to know when someone who suffers from a concussion is ready to return to work, school or sports, “an equally important question is, when people with a concussion can go back to driving?”

Along with the driving test, a neurological evaluation is important because not all cognitive impairments affect a person’s driving ability. For example, slurred speech won’t have an effect on driving like delayed reaction time. By pairing the tests, Schmidt said, the researchers get a fuller understanding of how the head injury translates to the task of driving.

While the study itself is small, Schmidt and Devos stress that the need for information in this field is large. For example, U.S. military personnel sustain concussions at high rates-either in combat or in training exercises-and it would be beneficial to have guidelines for when it’s safe to go back to driving a vehicle.

“Even though it’s small, it will be a study that people will refer to for a long time,” said Schmidt.