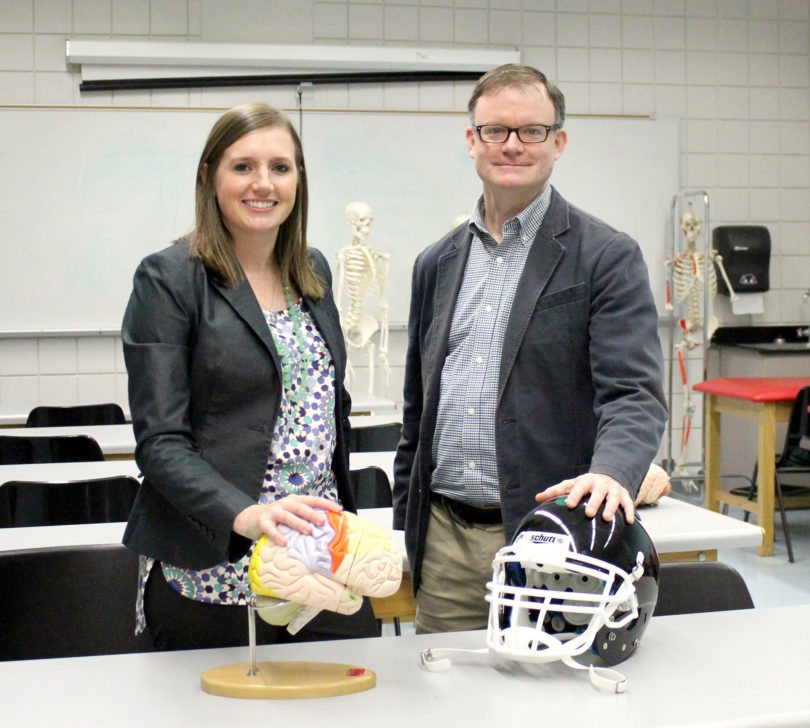 Julianne Schmidt and Welch Suggs are working on a research study funded by the NCAA and the Department of Defense to reduce the stigma surrounding concussions among college athletes. (Photo: Kristen Morales/UGA)

Athens, Ga. – Just days before the kickoff of Super Bowl 50, University of Georgia researchers are announcing a study addressing ways to reduce the stigma surrounding concussions, an injury so commonly associated with football.

Funded by a three-year, $400,000 grant from the NCAA and the U.S. Department of Defense, Julianne Schmidt, an assistant professor in the UGA College of Education’s kinesiology department, and Welch Suggs, an associate professor in the Grady College of Journalism and Mass Communication, are creating intervention methods to help athletes seek assistance after they have suffered a concussion.

“The goal is to change the culture in sport to one of reporting rather than one of concealing,” said Schmidt, who has led several studies involving concussions and the recovery process associated with them.

Suggs, who studies how media images affect individual attitudes about health and sports issues, will help examine how in-person seminars and multimedia presentations affect athletes’ attitudes toward reporting concussions. “The problem is, athletes are unwilling to report concussions because they’re worried about compromising their status on the team,” he said. “We’re trying to work with the athletes and the people surrounding them to make concussion reporting less of a threat.”

A survey will be conducted to determine athletes’ knowledge and attitudes toward concussions, and the results will be used to create an intervention strategy delivered in multiple platforms. Parents and coaches will be involved in the process as well, which will help reinforce among the athletes the importance of reporting a concussion. While there are no military participants in the research, the Department of Defense plans to use the study to address similar concussion-reporting issues among soldiers.

Schmidt said at the end of the study the team plans to present guidelines to be distributed throughout the NCAA to encourage reporting concussions derived from scientific evidence. This dives deeper than current concussion information given to athletes, which focuses on simply knowing the facts about a concussion. This new program would address questions elite student athletes ask, such as, “What will my parents think?” and “What will my coaches think?”

“A concussion can represent a threat to your status, a threat to your identity as part of an elite group,” she said. “We’re showing people it’s OK to have injuries treated and make yourself stronger.”