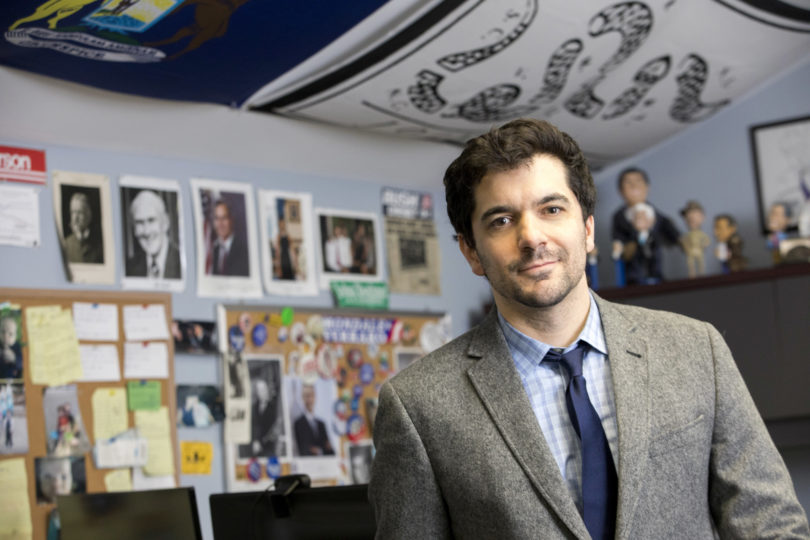 Anthony Madonna became interested in Congress while interning in the Michigan State Senate and continues share his knowledge with undergraduate students. (Photo by Dorothy Kozlowski)

On New Year’s Eve, Tony Madonna could be found at the wedding of two former undergraduates. To him, there is nothing more rewarding than being a mentor to his students. 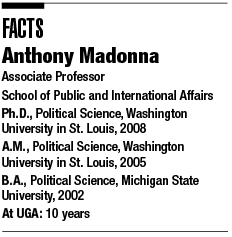 Madonna began work at the University of Georgia in 2008 as an assistant professor right out of his graduate studies at Washington University in St. Louis, Missouri.

“I chose UGA because it has such a good department for studying legislative institutions,” said Madonna. “That’s my specialty, and there are seven people who work here that I can co-author with at any time. It is a very strong group.”

As an undergraduate student, Madonna became interested in Congress while interning at the Michigan State Senate. Conducting legislative and constituent services work at the state level guided his career path as a scholar of congressional procedure.

“When I went to graduate school, I wasn’t quite sure what I wanted to do. I always loved Congress, and I was always interested in procedure, but it wasn’t something I thought I could specialize in,” he said. “I was reading the congressional record at 2 a.m. on a Friday evening laughing at something that was in there, and I remember thinking ‘yeah, maybe I will stick with this.’ ”

Now, as an associate professor, Madonna continues to pursue his passion and help undergraduate students pursue theirs as well. In 2010, Madonna, along with Michael Lynch, began offering an undergraduate research course that allows students to read through the congressional record starting back in the early 1900s to code information, specifically about the use of roll call votes.

Roll call votes, where each member’s position on an issue is recorded, have been a major focus of congressional research in the past, but according to Madonna, most votes in Congress do not receive a roll call vote, so these kinds of votes alone don’t tell the whole story of lawmaking.

“We are making the argument that a lot of the observed increases in polarization that we are seeing today are artificial. What we mean by that is that members of Congress are recognizing the importance of roll call votes and how they can be used to report a given position back home,” said Madonna. “What we have seen over time is that members select what is going to get a roll call vote intentionally in order to separate themselves from others from an ideological standpoint.”

With all the data collected, Madonna and Lynch are ready to take their findings to conferences. In May, they are hosting a Congressional Rules and Procedures Conference at UGA. With funding from the Provost’s State of the Art Conference Grant, their conference hopes to bring together scholars, practitioners and elected officials to assess the current state of congressional rules and procedures to explore paths for future reform to improve legislative efficiency.

“At the end of the day, our findings don’t fix anything. Polarization is still a problem, and it still leads to a lot of undesirable things, like crippling gridlock and unpopular legislatures, but what it does do is suggest that we need alternative means of reform,” he said. “We make the argument that there needs to be internal reform to rules.”

When the project started in 2010, neither he nor Lynch imagined what it would be today and the important role their class would play in their undergraduate students’ careers.